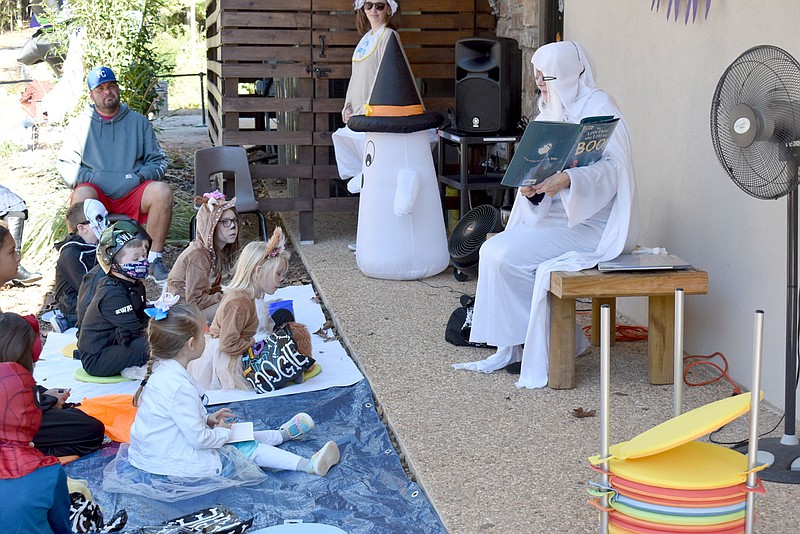 File photo "Granny Boo" (right) reads a Halloween story to children during "Treat Street" at the Bella Vista Public Library in 2021. "Treat Street" was one of many programs for children provided at the library, which is now offering several new programs.

The Bella Vista Public Library is offering new children's programming in 2023, new programs which will give children the opportunity to improve their STEAM skills while giving them the chance to read to a therapy dog or join a new book club.

Here is a list of some of the new programs to be offered in the new year at the library:

Starting Wednesday, Jan. 25, the Bella Vista Public Library will offer a STEAM (science, technology, engineering, art and math) workshop."We have a lot of programs for our younger ages from 0-8 and then we jump all the way to 13-17- year-olds, so there was a gap," Children and Youth Services Manager Alexandra Newman said. She added that Youth Services Library Assistant Ashdon Wilson had experience with a STEAM workshop from a former library position and suggested the idea, so the staff decided to add it to the programming.

According to a press release, Amazeum staff will lead the first "Let's Get Moving" workshop from 3-4 p.m. on Wednesday, Jan. 25. Activities will include:

In February, a staff member will lead the STEAM workshop, which will have a theme of light. Newman said the activities will deal with cyanotype, one of the first forms of photography (how to take photos with sunlight); camera obscura, another type of photography; and projecting the visible spectrum.

Other themes planned for the season include:

Newman said the library is starting a program called Paws and Read, which will allow children to read to a therapy dog at the library.

"Before last spring we used to have a therapy dog that came to story times, but that pup passed away," she said. "We thought it would be nice to have a dog to read to because when kids read with older kids or adults they get corrected, but dogs don't really say anything ... so kids get really confident with reading. It's just a really good tool for building confident readers."

She said there are two dogs that will participate in the program, but it will start with one, a lab named Pixie. Pixie will be brought to the library by a volunteer handler, Newman said. Families may sign up for time slots with a therapy dog starting Wednesday, Feb. 1, and the first available space is on Monday, Feb. 27, according to the library's press release. To reserve a spot, call the library at 479-855-1753.

Newman said the staff decided to bring back an old program the previous children's librarian used to do: a Lego challenge for all ages. Once a month, patrons may drop in throughout the day, create something out of Legos and leave it to be displayed for the month. On Wednesday, Feb. 8, the "Flowers" challenge will be held, according to the press release.

"This will be our first daylong challenge that involves patrons of all ages to come together and create," Newman said.

The Teen Advisory Board has been working toward starting a teen book club for ages 13-17, Newman said. It will be called Read Between the Lines, and it will meet the third Tuesday of the month. The first meeting will be from 5:30-6:30 p.m. on Tuesday, Feb. 21. The first few books have been selected, and teens may pick up a copy at the library. Friends of the Library has funded copies of the first few books for participants to keep, Newman said.