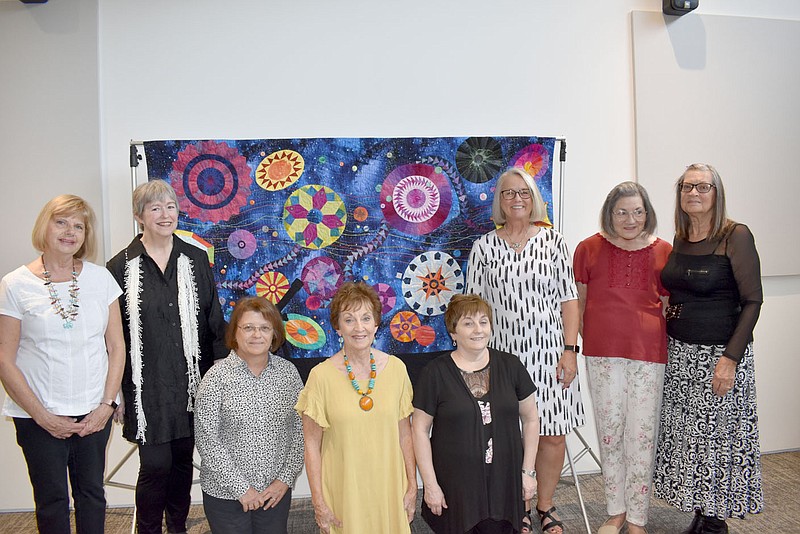 Prudhomme said members of the group all quilt and paint as individuals but occasionally create a quilt as a group and used to enter contests.

On display prominently was a group quilt called "Spocking the Imagination" that won fourth place in a National Quilters Museum challenge in 2020 and toured with American Quilters Society shows for two years. Prudhomme explained the challenge was to take a traditional quilt block, which was called Wheel of Fortune, and reimagine it in a modern way. Wheel of Fortune features a wheel with spokes. The group created a night sky with planets and stars scattered across it, adding a stargazer and a telescope.

Prudhomme said they have donated some of their quilts in the past, but for "Spocking the Imagination," one of the group members will be randomly selected to take it home.

Kielmeyer commented it was amazing the group received fourth place in the National Quilters Museum challenge, saying famous artists enter the contests and an artist has to be allowed by the museum to enter the challenge.

For their latest challenge, they are working on a zinnia quilt. Kielmeyer took a photo of a zinnia and enlarged it, and the members each took a section of the photo to create a section of the quilt, Prudhomme said. The sections were placed together for the public to see how the quilt would be completed.

Each of the members showed some of their individual work during the presentation and discussed how they created them. Most of them had completed a Van Gogh challenge, in which they recreated a Van Gogh painting through piecing together different fabrics. Some of them also used paint designed for fabric for this challenge. Gant shared two portrait quilts she had made using fabrics and thread painting. Foss shared an architecture challenge quilt in which she re-created a photo of a gate with moss from the Lake District in England using tiny pieces of different fabrics. Kielmeyer showed the audience a quilt she made with some fabric she designed with the help of a fabric company.

Following the presentation, the audience was invited to look at the various works of art.