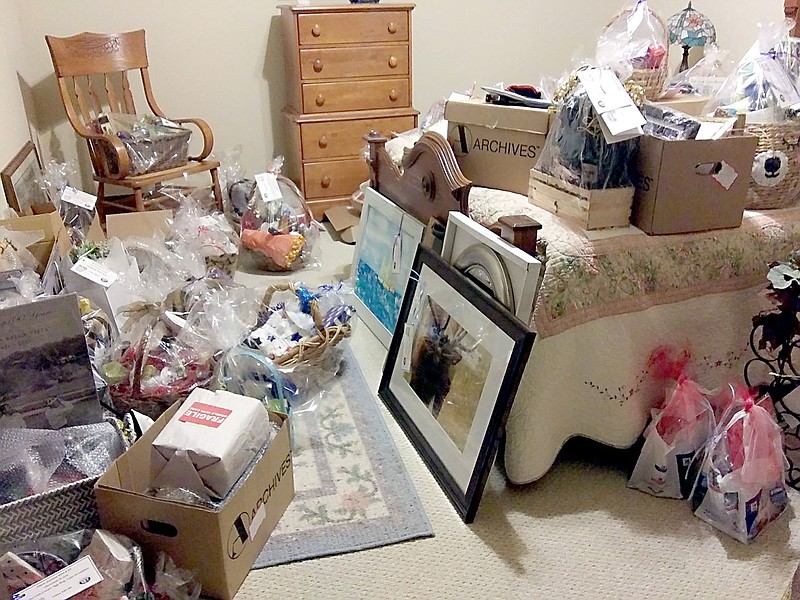 Photo submitted Silent auction items are piling up in a spare room at volunteer Deb Sorensen's home. The auction is part of the Bella Vista Charity Classic golf tournament scheduled for May 25 through 28.

As the Bella Vista Charity Classic approaches, Deb Sorensen's guest room is filling up with silent auction items. On May 20, everything will be moved to the Country Club where bidding begins on the items.

"We have some wonderful items," Sorensen said. This year, several local artists are represented along with a golf outing to Indian Hills Golf Course, a Mexican vacation and a brand new mountain bike. All of the items have a "buy it now" price in case someone really wants it, she said.

On Monday, May 23, everything moves to Lakepoint where the Pro-Am Tournament party takes place. There will be a live auction for a few special items, Sorensen said, and the winners of the silent auction will be announced. The wine tree moves too.

The wine tree, Sorensen explained, is a lot of fun. Donated wine is displayed on a wooden stand that was built to display poinsettias at a local church. People buy a cork for $20 which has a number on it. When they match their number to one of the bottles on the tree they may win an expensive bottle of wine -- or not.

Last year, every item at the silent auction was sold and all that money went directly to the charities that participate.

The Bella Vista Foundation organizes the charity part of the Charity Classic and the five charities are all local. Some, like the Bella Vista Animal Shelter, have been part of every APT tournament in Bella Vista.

Each charity had to apply to participate and the application asked where the funds would be spent.

When they were accepted, they were asked to provide five to 10 silent auction items. Each charity was also expected to fill at least two teams for the Pro-Am Tournament. Representatives from each group affirmed that neither task was difficult.