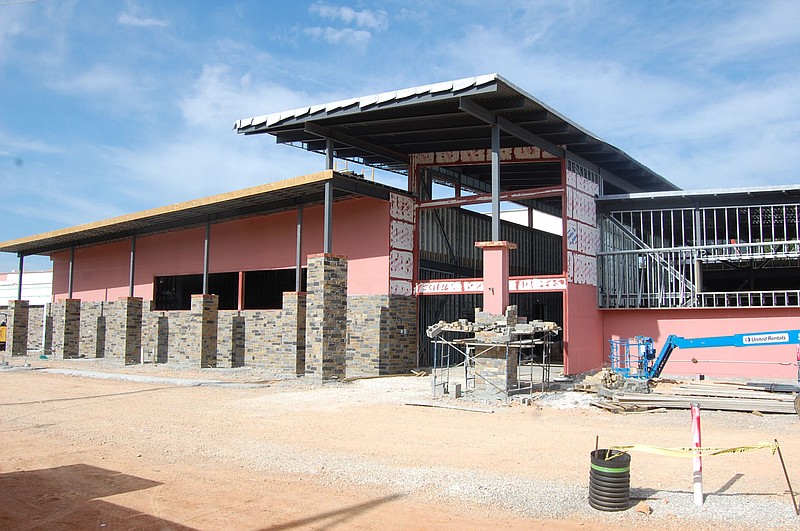 Good progress is being made in the construction of the Bella Vista Public Safety Building, according to Police Chief James Graves.

"It's coming along great," he said. "We're several months into the project. I'm told we're still on schedule for completion in December of this year. We've had no major issues."

He said he has been with the department since 2017, and Bella Vista has needed a public safety building for some time. It was one of the things the mayor hired him to accomplish, he added. Voters approved a bond issue and a 1% sales tax to fund the building and other projects, and then the city started the design and building phase.

It will be about 46,000 square feet and will house the district court, police department and public safety dispatch, he said.

"It's not really designed to fit that department until about 30 years from now," he said. "It's the only public safety building the city needs for the foreseeable future."

He added, "Really, that building is giving us the ability to move into the future, to professionalize the police department, to serve the citizens of Bella Vista."

The new building will have a 50-yard internal gun range where the department can do all its training and qualifications in a controlled environment "24/7/365" without worrying about weather, Graves said.

There will be a training area and a large evidence facility. Currently the evidence room is not large enough for all of the department's evidence, and some of it has to be kept off-site, while other evidence is required by law to be kept on-site. The new building will provide room to bring it all back together.

A new gym will provide officers a place to work out during their off hours, and there will be extra offices and room to grow, Graves said.

Tabitha Tichenor, chief court clerk, discussed some of the features the court area will have.

"We have added in some new things that I think are going to be beneficial in the future," she said.

The first new item is a sound-locked vestibule leading into the courtroom. She explained that currently the courtroom opens to a hallway that is right by the security desk, which is right next to where everyone is entering and exiting the building, and it gets chaotic.

The sound-locked vestibule will have two attorney-client meeting rooms inside it, and then people will enter the courtroom from there.

"It should close off sound from the public so everything is a lot more peaceful," she said.

Another new feature is the disposition hallway, she said. People will exit the courtroom through this special hallway where they can complete their court business through a cashier's window to the clerk's office.

"We want to serve the public the best we can, and we're thinking both these features help us better serve," she said.

She added the bench has been reconfigured for a more efficient workflow than at the current courthouse.

"We're just excited about the progress on the building," she said. "It's really coming along so swiftly. I'm really surprised by how fast it's come together, and it's going to allow us to grow over the next few years."