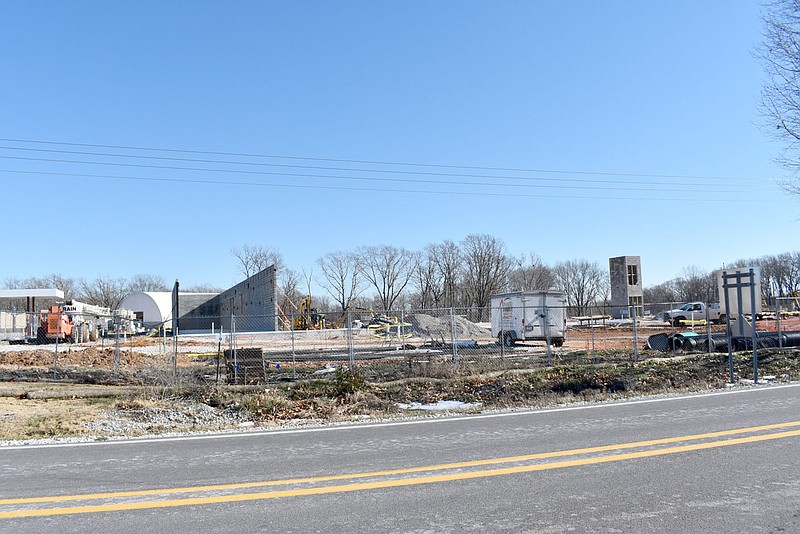 Rachel Dickerson/The Weekly Vista Construction has begun on the new public safety building, located on Forest Hills Boulevard next to the Bella Vista Street Department. The long wall, left of center, is part of the shooting range that will be in the new police department, and the tower-like structure at the right is an elevator shaft.

Work has begun on the new Bella Vista Public Safety Building, located next to the street department on Forest Hills Boulevard.

Police Chief James Graves said the building is expected to be complete in December, depending on the weather.

He said the facility will be around 47,000 square feet and will house the police department, dispatch and district court.

"That will be nice to have the court operations there, since we work hand-in-hand," he said.

He noted the current police station is a converted POA office building that does not have features such as a detention facility or a training area.

"The police are currently in a 7,000 square-foot building, and we need close to 20,000 square feet. This will give us room to grow for the next 30 years. It's a neat thing for Bella Vista because we've never had a police station built as a police station," he said.

The new police station will have a secure detention facility to hold those under arrest temporarily until they can be taken to the Benton County Sheriff's Office. It will have a training room. It will have a 50-yard indoor gun range for all required training on handguns and rifles. Graves noted at this time the police department has to ask the POA to use their range, displacing POA members. The new station will also have a weather-hardened center for dispatch that meets FEMA standards, he said, as well as a workout facility for officers to stay fit.

Of the structures that have been built at this stage, Graves said the long wall is the gun range and the tower-like structure is the elevator shaft.

He said since taking on the role of police chief in 2017, he and his leadership have done a lot to grow the department, but due to running out of room, the department has kind of come to a standstill.

"Once we get in this new building it will allow us to continue to grow and keep our crime low and ensure that Bella Vista stays a great place to live," he said.

The architect for the project is Hight Jackson, and the builder is Nabholz. Both are Northwest Arkansas companies, Graves said. The city is also working with a civil engineer, CEI.

Bella Vista voters approved a bond issue and a 1% sales tax to pay for the public safety building, along with two other projects: a new fire station 3 and a fire training tower.