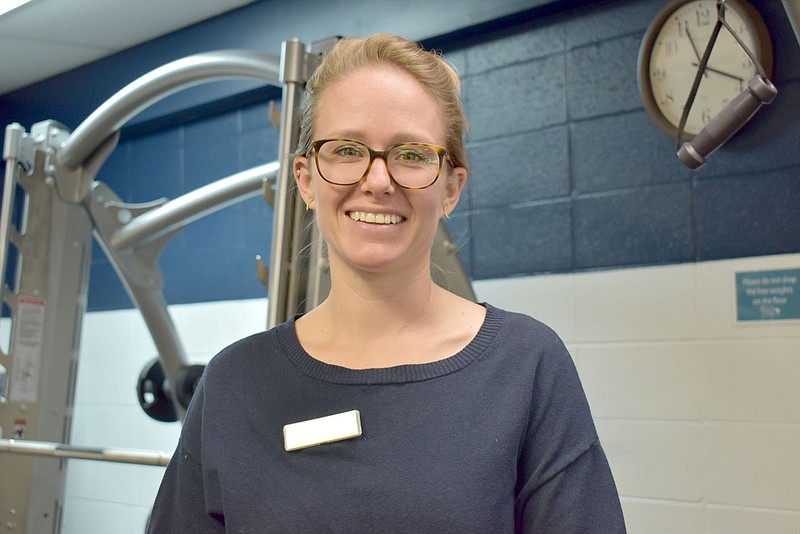 Rachel Dickerson/The Weekly Vista Ashley Nichols, the new manager of Riordan Hall, is pictured next to some fitness equipment.

Ashley Nichols, the new manager at Riordan Hall, brings to her job a love of recreation and a desire to see everyone included.

She grew up in the Dallas/Fort Worth area and attended Texas State University, where she earned a degree in recreation administration with an emphasis in therapeutic recreation and also a national certification for recreation therapy. Upon graduating she moved to Houston for six years, and then she and her husband, Ethan, moved to Bella Vista.

Nichols has worked for the POA since April, but initially she worked as a marina attendant. She started the job as manager of Riordan in August. In addition to managing Riordan Hall she works on a recreation team with other recreation managers throughout the POA.

"Mainly my goal is to manage Riordan Hall and provide the best experience for people who've been coming here longer than I've been alive," she said. "It's cool to hear people's history."

One of her main duties is to be out front so people can get to know her and she can get to know them, she said. Another goal she has is to try everything offered. She has tried line dancing. She watched a game of snooker and some members taught her the rules, she said. She tries to be active in the gym and the community.

"I think recreation is separate from fitness. It can include fitness, but it's when people get a sense of joy, purpose and belonging. It's fun to watch members find their recreation niche," she said.

She wants to make sure everyone feels included, she said.

"Riordan is cool and special because it's kind of a hub of the community," she said. "Next year will be its 50th birthday."

She said of her job, "I love it. I feel like I'm learning something new every day because there is so much history here. I'm a full believer that recreation is for everyone, so it's cool to play a role where I facilitate that."