Bella Vista Crafts Fair Canceled; others still on for third weekend in October 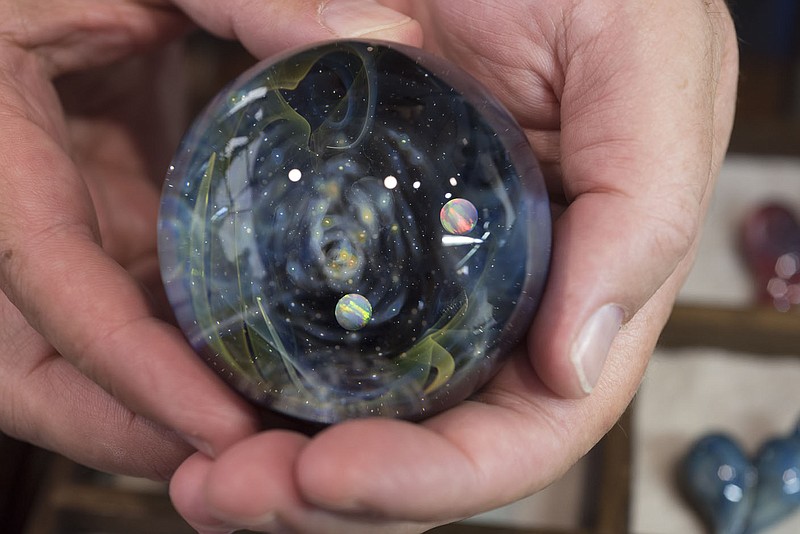 NWA Democrat-Gazette/J.T. WAMPLER Mort holds one of his pieces called a pocket universe Thursday Oct. 15, 2015 at the Bella Vista Arts and Crafts Festival.

The Bella Vista Arts and Crafts Festival, scheduled for Oct. 14-16, has been canceled due to the recent covid-19 outbreak.

This email was sent out Wednesday morning to exhibitors and others associated with the Bella Vista Arts and Crafts Festival, scheduled next month: "After much deliberation, the board of directors of the Artisan Alliance has determined that, for the safety of our exhibitors, volunteers, shoppers and our staff, the Bella Vista Arts and Crafts Festival will be canceled for 2021. Upon reviewing the covid situation in Northwest Arkansas, we determined that it is far worse than it was last year. We will keep you informed on our website and Facebook page as we move forward in 2022."

In a phone call, spokeswoman Mary Sinkus, a member of the board, confirmed the decision, saying organizers simply did not feel that having the event was safe for participants. It will be the second year in a row the festival, founded in 1968, has been canceled due to covid-19 concerns.

As of noon Wednesday, Sept. 1, these fairs had confirmed plans to be open the same weekend:

War Eagle -- War Eagle Mills Farm, War Eagle Mill and Sharp's Show at War Eagle all happen around the War Eagle Creek bridge. Debbie Billings, a spokeswoman for War Eagle Mill, said the three landowners usually make any decisions together and had made no decision to cancel as of today. Katie Templin, executive director of the War Eagle Fair, confirmed she has no plans to cancel the event, now in its 67th year. Dates for the War Eagle shows are Oct. 14-17.

Ozark Regional Craft Fairs -- Karen Lloyd, one of the founders of the Ozark Regional Crafts Fairs, confirmed that the fall festival at the Washington County Fairgrounds in Fayetteville will happen Oct. 14-15-16 and the event at the Northwest Arkansas Convention Center in Springdale will take place Oct. 15-16. A Holiday Market is also planned for Nov. 5-6 at the Northwest Arkansas Convention Center.