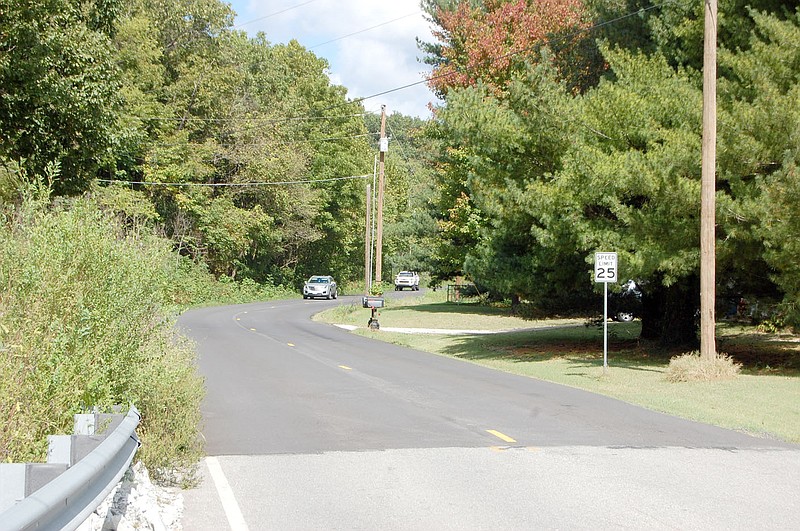 Bennett Horne/The Weekly Vista Weather issues from earlier in the year have pushed back completion of paint striping on Spanker Road in Bella Vista.

When a road project is delayed by weather it is usually because of rain. But in the case of the paint striping project on Spanker Road it is a freeze that is the culprit.

After receiving a new surface earlier this year, the approximately 1-mile stretch of Bella Vista road between Spanker Ridge Drive and Euston Drive was ready for fog stripes, the white lines that help make a road's edges more visible. When officials called Time Striping, the Texas-based company that supplies paint for the city's street projects, they were told no paint was available.

"There's basically one company that makes all the paint and it's in Texas. Everybody uses them and everybody outside of Arkansas uses them," said Bella Vista Mayor Peter Christie. "We had a very, very cold winter, and Texas had that big freeze and apparently they had stored a lot of the paint outside and they lost their inventory. And now whatever it is that you need to make paint they can't get because of backlogs with covid."

There are reports that the needed materials are in container ships anchored off the coast waiting to be unloaded.

"Whether that also has something to do with the paint problem I'm not sure," Christie said.

Since this is the same company used by the Arkansas Department of Transportation to stripe the new Bella Vista Bypass, city officials tried checking with Time Striping to see if there would be any spare paint from that project to cover Spanker Road.

"What I had hoped to do was to leverage the same company," Christie said. "I was hoping, after talking to the project manager for the bypass, because they use Time Striping and they seem to have been able to access paint for everything they needed, that we could leverage that relationship.

"I went to Mike Button," he continued, "who is my superintendent of streets, and he got in touch with Time Striping and said, 'Look, the mayor's spoken to (bypass construction project coordinator) Brian Powell over at ArDot and he says they've got lots of paint, so why don't you just take some of the paint they've got leftover ... .'"

The idea fell through, leaving the road stripeless and its edges harder to see.

"The problem is, we don't have a lot of street lights here because there's 550 miles of streets," said Christie. "That's more than even Little Rock has. If we tried to put street lights all over the place we would be spending an awful lot of money. We already spend about $150,000 a year paying Carroll Electric just for street lights alone. So one of the answers - and in fact, you're supposed to do it by law - is to paint white fog lines on the edges of the road. Our concern is that you'll get somebody driving at night and he or she doesn't know where the road ends on the edge."

Compounding the problem is the fact Spanker Road, like many in Bella Vista, is curvy with steep dropoffs.

"There isn't much of a shoulder," said Christie. "You're either going to hit a cliff on one side or you're going to go into a hollow on the other side. That's the reason it has become so urgent."

The mayor said city officials will continue to see if paint can be obtained from anywhere else, but added, "I don't think we'll have much luck."

And when the source of the paint is one of the most-used in America, it is safe to say Bella Vista is not the only city with stripeless streets.

"I don't think it's just us. I'm sure other cities are having the same problem," Christie said. "That's disappointing."