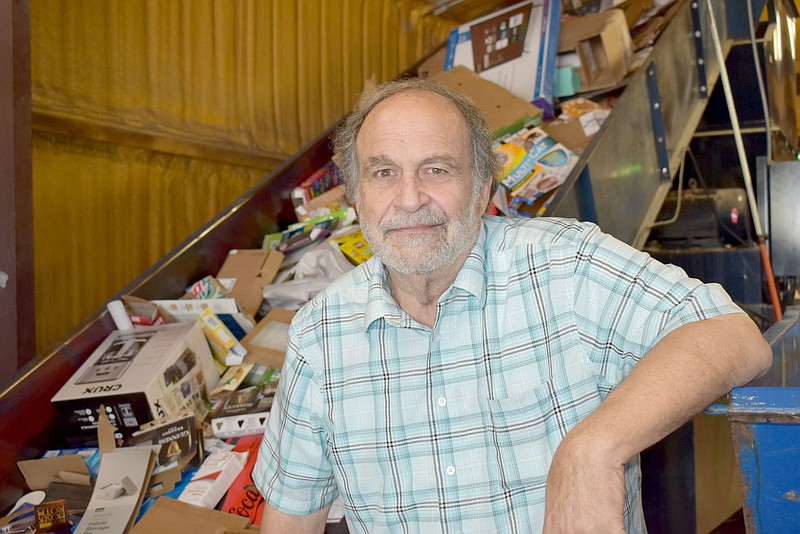 Rachel Dickerson/The Weekly Vista Paul Poulides, president of the board of directors of the Bella Vista Recycling Center, is pictured next to a conveyor belt filled with cardboard at the center. He volunteers at the center regularly.

Paul Poulides serves as president of the board of directors of the Bella Vista Recycling Center and also as a volunteer.

He moved to Bella Vista from Houston where he was in materials management at MD Anderson Hospital. He and his wife, Patti, used to come to Anderson, Mo., and visit his sister, so they were familiar with Bella Vista and decided to settle here. Patti suggested they get involved with the recycling center 12 or 13 years ago, he said. Now he volunteers 30 or 40 hours some weeks and other weeks five or 10 hours. He said he likes it that all the members of the board of directors have volunteered at the center.

He said the center sees 2,000 cars per week. Bentonville residents or Missouri residents sometimes bring their recyclables, but mainly Bella Vista residents visit the center. More than five million pounds per year of material is recycled thanks to the center.

At a recent meeting, he said he learned that Fayetteville's diversion rate -- the amount being kept out of landfills through recycling -- was at 20 percent, he said.

"We're probably at 99 percent," he said. "If we can sell it, we take it. Our stuff is always in demand. It's well-sorted and properly baled."

He said the customers for the recyclables are, for example, paper mills, which buy cardboard, office paper, magazines and books.

"We have a broker that finds the best buyer and arranges pickups when we need it," he said. "The fluctuations in this market are incredible."

He said cardboard was $240 per ton three years ago, then it went down to $40, and now it is back up to $200. When the prices go down, the center will store the recyclables for a time until the prices go back up.

The center does receive some outside funding. The state provides grants to each county each year, and the center applies for a grant each year, he said. The center also applied to the POA for a grant last year and received $7,000, he said.

His favorite thing about volunteering at the center is talking to the people who bring in their recyclables.

"We get new people in all the time. The word gets out, and we don't advertise," he said.

"I like the mission we have a lot," he said. "I like the people I work with, and I like the customers. We serve a good purpose. We're keeping five million pounds out of the landfill, and we're still donating money."

The Bella Vista Recycling Center is located at 400 Pinion Bluff Drive. The gates are open 24 hours except it is closed on Sundays, and staff are on site 7 a.m. to 2:30 p.m.