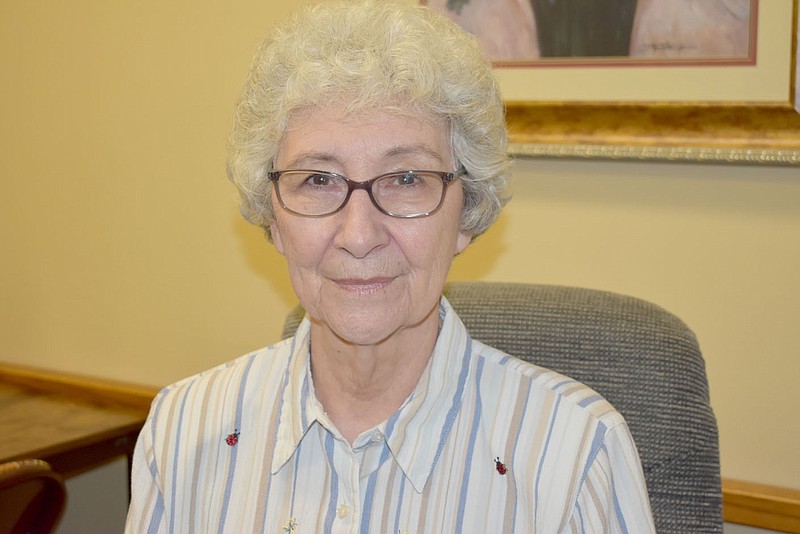 Rachel Dickerson/The Weekly Vista Becky Garrison of Bella Vista has enjoyed sports throughout her life and has shared that interest with several members of her family.

Becky Garrison of Bella Vista shares a love of sports with several members of her family.

She grew up in Mount Vernon and graduated from high school there, earning a basketball scholarship to Beebe Junior College.

"I was in the day a pretty good basketball player," she said. "In high school I made all state in the 11th grade."

"I loved it. I loved basketball. I like all sports now," she said.

She studied business and some math in college and, after junior college, went to work at a manufacturing plant where she did payroll. She said some employees at the plant made minimum wage, which at the time was 87.5 cents per hour. After a few months she married David Garrison, who had gone to Mount Vernon School with her. She had known him since the second grade, and they were high school sweethearts.

"It was kinda neat in that he played sports also, so we shared that interest. In school plays we were always cast together, usually as husband and wife," she said.

They had two sons, Danny and Greg. Their sons both graduated from Conway High School and both earned football scholarships to college. Danny went to Arkansas State at Jonesboro where he was a tight end, and Greg went to the University of Arkansas where he played for Lou Holtz.

Becky did not work for a few years when the children were small but started working again when Greg started school. She worked in the business department at Polyvend, a manufacturing plant in Conway, and after a few years became personnel manager. She quit work for three years when Danny was playing football at Jonesboro so that she could attend all the games. Later she kept books at a tire dealership in Conway for eight years.

David worked for Missouri Pacific Railroad, which merged with Union Pacific Railroad, as a train dispatcher, and he was transferred from Little Rock to Omaha, Neb. Becky did not work while they lived in Omaha but kept busy with church work, water aerobics and playing cards with the many friends they made. They lived there four years until David retired and they moved to Bella Vista.

They have six grandchildren, some in Omaha and some in Springdale, and they all participate in sports. Becky said she has attended a lot of their events. Two of her granddaughters earned basketball scholarships to John Brown University in Siloam Springs, so she and David attended all those games.

David died in January. They had been married 65 years, and he had 26 years of completely happy retirement, Becky said.

"If everyone could live to be 85, 65 years of marriage 26 years of perfect retirement, it would be a blessing for everybody, so I know I'm blessed," she said.

After David died Becky moved to Concordia Retirement Community, where she said she has made a lot of friends and goes to exercise class, Bible study, devotional class and was able to participate in a grief share program for 13 weeks.

She added David's first job was in Atchison, Kan., and they made friends with four other couples in their Sunday school class there. Over the years, the five couples have all kept touch, although four have moved away, through a round robin letter that travels between the couples, and they play Yahtzee in the letter. Three of the husbands out of the five couples have died, but the remaining members of the group have kept the round robin letter and Yahtzee going for 55 years, she said.

"I've had a fulfilling, happy life with a really good family," she said.