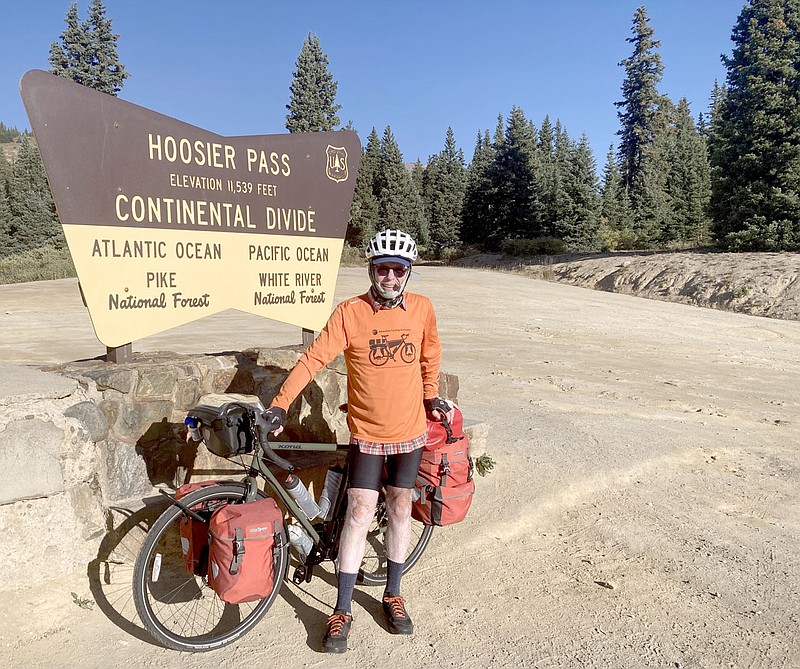 Courtesy Photo Jim Klinger of Bella Vista is pictured at Hoosier Pass, the point of highest elevation on his journey across the Trans America Trail.

"This was number one on his bucket list for as long as I've known him," said his wife, Denise.

The ride was a self-supported tour, meaning he carried everything he needed with him on his bike. He and a friend, Greg Parker of Springfield, Mo., flew out of Kansas City, Mo., with the bicycles as luggage to Portland, Ore., and took a bus to Astoria. Then they biked through Oregon, Idaho, Montana, Wyoming, Colorado, Kansas and Missouri, where they took a break and went to their homes.

They traveled 3,205 miles, with their longest ride being from Breckenridge, Colo., to Canon City, Colo., (100.25 miles). This was also the day of the largest temperature difference. In the morning in Breckenridge it was 34 degrees with a wind chill of 16, Jim said, and at the end of the ride in Canon City it was 97 degrees.

Jim carried 55 pounds of gear on his 30-pound bike. He carried a tent, sleeping bag, three sets of riding clothes, food, cooking gear, lots of water and a camp chair.

They were on the road 53 days. They spent the nights in parks, churches, campgrounds, RV parks, one hotel and with Warm Showers hosts. Warm Showers is an organization of bicyclists that open their homes to others who are traveling cross country via bicycle. The Klingers are Warm Showers hosts as well.

Jim said he thought the most interesting parts of the ride would be the riding and the scenery, but it turned out to be all the people they met. For example, they met an 83-year-old woman named Ethel who lives in Missoula, Mont., who rides her bicycle everywhere and had just gotten back from touring Alaska. Ethel also did an 83-kilometer ride for her 83rd birthday.

The most welcoming city, he said, was Eads, Colo., which was the midpoint of the ride. There was a banner in the town proclaiming it the midpoint of the Trans America Trail, he said. While they were setting up camp, three different people stopped by to tell them the city fair was starting the next day and that they were welcome to attend a free pancake breakfast. Jim said he enjoyed the pancakes, eggs, bacon and real coffee after weeks of instant oatmeal and instant coffee for breakfast.

Denise said a lot of planning went into the ride, particularly avoiding the worst of the hot and cold weather. Jim ultimately figured out July 31 would be the best date for him and Greg tp leave. They returned home on Sept. 17.

Denise said Jim would ride eight hours a day, covering 80 to 100 miles, and then he would have to go to the grocery store and plan a few days ahead where he was going to stay, calling to make arrangements. The days ended up being 12 to 15 hours long, she said.

At one time they feared roads would be closed due to wildfires, and they did experience some smoky days, Jim said. One day he called the Montana Department of Transportation to see if all the roads were going to be open and learned that a highway was going to close before they could get there, although it was due to construction and not due to the wildfires. They were traveling with others who knew people in the area, and the friends gave them rides in cars so they could get to the highway before it closed.

"You have got to be flexible, because what you plan has a good chance of not happening," he said.

Upon reaching Everton, Mo., Jim and Greg decided to take a two-week break. While at home, Jim became gravely ill. He had lost 21 pounds while on the road, and his immune system was probably in a weakened state, he said. Doctors said he contracted West Nile virus and Alpha-gal while on the trip. He was ill for seven weeks, only starting to feel better again around early November.

Denise said it was fortunate that he became ill while at home and not while in a remote place. There were times when he did not have cellular signal, she said.

Jim told Greg to finish the ride without him. Jim has three weeks to go on the ride, which he will finish in the spring.

Jim said the trip has been "one of the highlights of my entire life."

"I have always been a biker, and this idea of ... that sense of freedom. You have everything you need to survive on that bike and nothing stops you from going where you want to go."