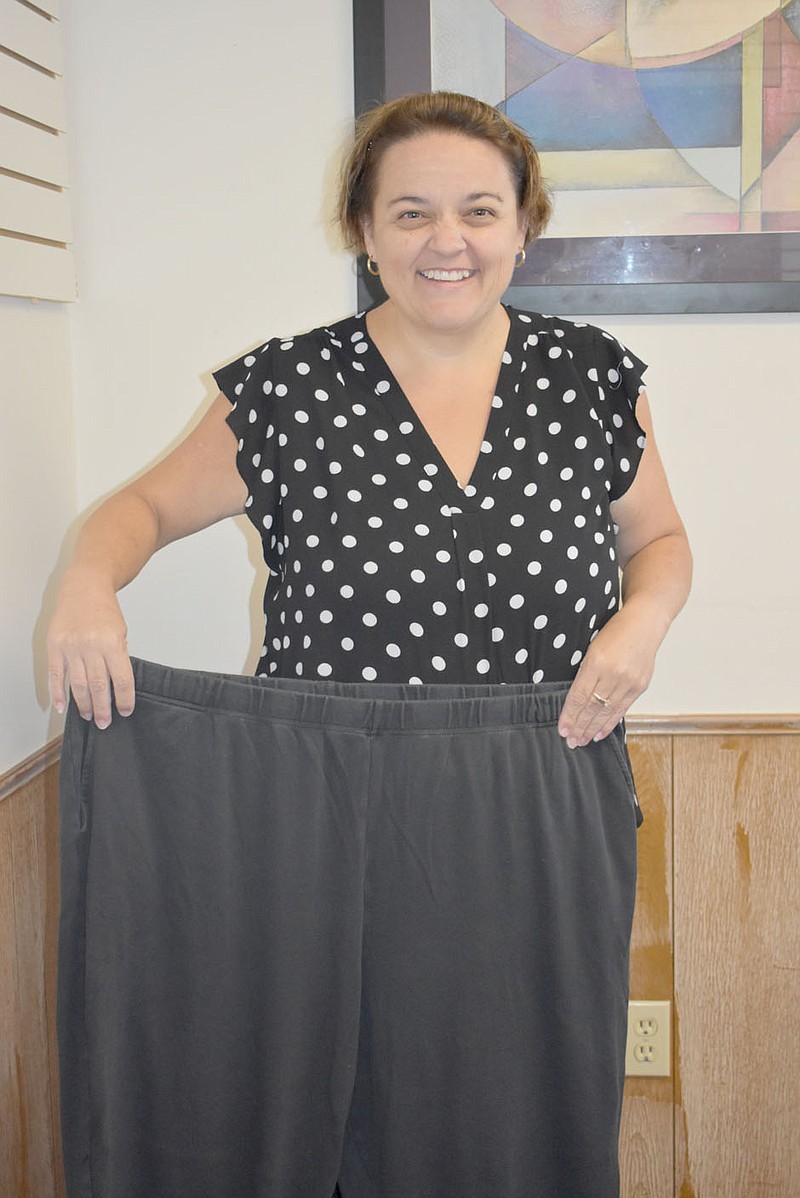 Rachel Dickerson/The Weekly Vista Julie Hull of Bella Vista holds up an old pair of pants that are too big now that she has lost 200 pounds thanks to diet, exercise and weight loss surgery.

Bella Vista real estate agent Julie Hull has been on a wellness journey for the past four years that has resulted in the loss of more than 200 pounds through diet, exercise and weight loss surgery.

"None of this was ever vanity for me. I wanted to get healthy," she said.

In 2017 she was on a family vacation in Hawaii when she became very ill and collapsed at the emergency room. Doctors told her she needed to make some changes. She ended up on four months of bed rest and having two major surgeries. At the end of that time, she was very weak.

She decided to hire a trainer, Suzanne Hart of Training With Hart. For their first session, Hart suggested they walk around the neighborhood, and Hull could not walk as far as her mailbox, she said. At that time they started doing three sessions a week with Hull doing exercises in a chair because she did not have the strength to stand. She would sleep for a couple of hours after each session in the beginning but slowly built up her strength over time. After about a year she changed her diet to a keto diet, enhancing her weight loss. After three years, she had lost 120 pounds.

At that time she went to Roller Weight Loss and Advanced Surgery in Fayetteville because she wanted skin removal surgery, as she had some loose skin that was getting in the way during workouts. She said Roller is a world-renowned bariatric clinic that just happens to be in Fayetteville. The doctors there wanted her to lose another 100 to 130 pounds first, she said, and they told her at that time she would be healthy enough to stop taking her blood pressure and diabetes medications.

She had weight loss surgery at Roller called the modified duodenal switch, which is the "new gastric bypass," she said. The doctor removed 70 percent of her stomach and 50 percent of her small intestine.

"This was the single most painful thing I've ever done in my life, but I would totally go back and do it all over, knowing that, because it was life-changing," she said.

In the first two weeks, she was able to stop taking her blood pressure and diabetes medications. The surgery was in April, and at this time, she has lost another 100 pounds.

"It's simply amazing," she said.

Her eating habits changed following the surgery. She can eat an amount the size of her palm. She has to focus on protein first, then vegetables. She does not eat fruit or carbohydrates, generally, and sweets and fast food are totally out, along with anything fatty. She eats three meals a day and two snacks. She has eggs for breakfast, lunch meat and cheese for lunch (no bread) and variations on what she serves her family for dinner – such as taco salad if they are having tacos.

During the process of getting healthy, Hull also started her own real estate company, Neighbors Real Estate Group.

She said the best two things she has done were hiring a trainer and having the weight loss surgery. She added that if someone has a family member who has a weight issue, they need to be supportive.

"My family was all on board when I told them I wanted to make a change," she said, adding they have walked with her, exercised and eaten differently for her.

She said she will continue to work out because, "One thing I will never do, I will not gain this weight back. I will never stop going to the trainer. If you want to make this change in your life, you've got to make working out, eating correctly a priority. It's as important as going to church, it's as important as kissing and putting your kids to bed at night. If you want health, this is how you achieve it."