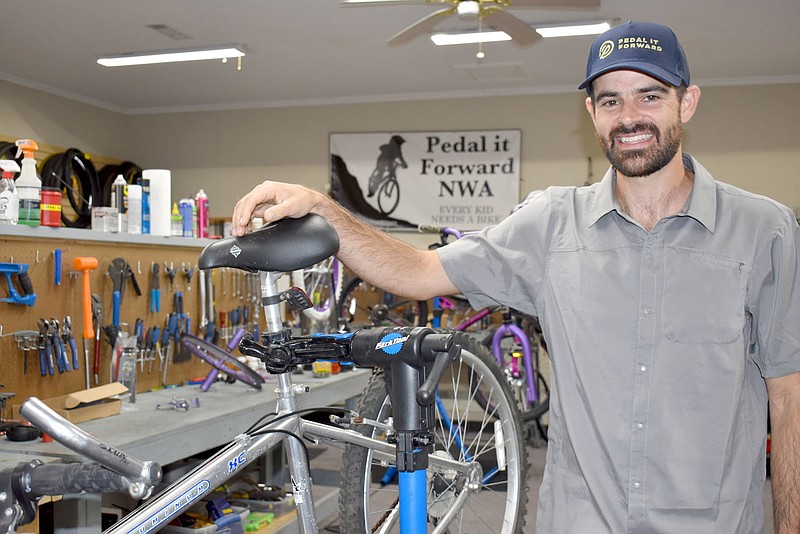 Rachel Dickerson/The Weekly Vista Kenny Williams, program director of Pedal It Forward, is pictured at the nonprofit's location on NW Wishing Spring Drive. The organization partners with other local nonprofits to distribute free or low-cost bicycles to those who cannot afford them.

Local nonprofit Pedal It Forward is always looking for volunteers and bicycles to help in its mission of increasing the number of people using bicycles by giving them away or providing them at low cost to people who cannot afford them.

Kenny Williams, program director, said Pedal It Forward was started in 2014. It began as an effort by local cycling enthusiasts to give bikes away at Christmas, but the donations never stopped coming, he said. It kept growing until the founders gave the program a name, created a board and became a 501(c)(3). It was run completely by volunteers until about three years ago, when the board hired its first full-time employee. Williams is the nonprofit's second full-time employee.

The charity has a goal for next year of giving away 2,000 bikes, Williams said.

"It's a pretty unique model," he said. The nonprofit receives donations of bicycles from the public, along with damaged inventory from the Walmart distribution center. The group also has unique relationships with local police departments and parks and recreations departments that end up with bicycles through evidence or lost and found. However, he said, 90 percent of the donations come from the public. Volunteers repair the bikes, and then they are given away through other nonprofits called Pedal Partners.

Williams said it is not uncommon for the charity to fill orders of 20 bikes to a partner or to hold events where 80 bicycles are given away.

"We're not afraid of big numbers. We just need time," he said.

"Every bike has a story," Williams said. "Don't be afraid to donate your bike because you think it's too bad. If it's completely rusted out, we probably can't fix it, but we can scrap it."

The volunteers fix tubes, tires, grips, cables and housings, lubricating and tightening and adjusting everything as needed. They will replace parts if necessary.

"There's not much that scares us off," he said. "We're all volunteer, self-taught tinkerers. If you are a cyclist or have been a cyclist and know your way around your bike in your garage, you can probably help us out."

To volunteer, visit pedalitforward.org, click on "volunteer" and scroll down to the "volunteer form" link.

There is a bike rack outside the building with locks on it where bicycles can be donated, he said. The address of the local office is 3902 NW Wishing Spring Drive, not far from the Bella Vista Walgreens. The nonprofit's logo is clearly marked on the building.

Donors who wish to have a tax receipt for their donation may contact Williams at [email protected] or 747-217-2703.

There will be a rummage sale to support Pedal It Forward from 11 a.m.-6 p.m. Friday at the location at 3902 NW Wishing Spring Drive. Bicycles, parts, accessories and more will be for sale, both used and new. Vintage, rare, high end and "funky" items are also promised.