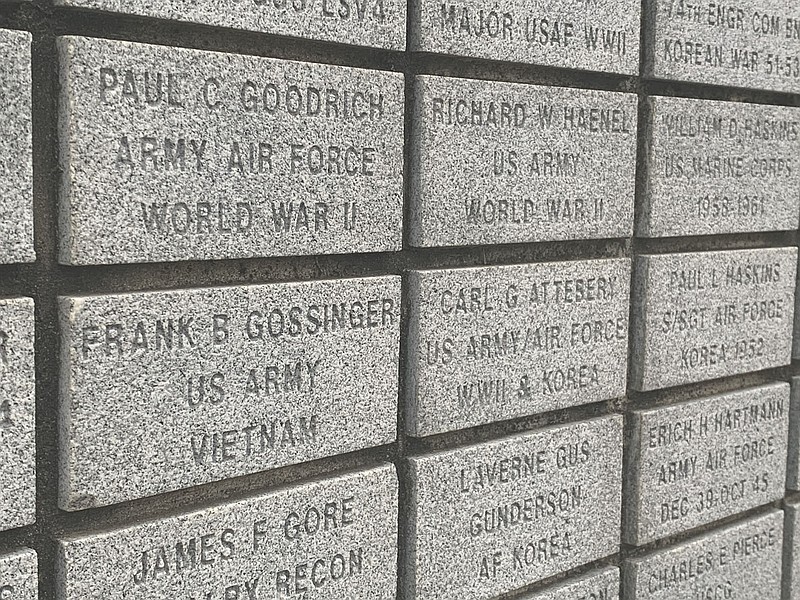 Photo by Sally Carroll/Special to The Weekly Vista Many aspects of the Veterans Wall of Honor highlight the sacrifice many made on behalf of our freedom, according to Lisa Watten, daughter of the project's architect. Watten frequently visits the monument and feels her dad's presence there.

Lisa Watten visits the Veterans Wall of Honor twice a week to soak in her dad's presence.

Vern Watten worked as a professional architect. His last work was dedicated to all veterans and the Bella Vista community.

Watten moved from Minnesota to the village in 1997, to work as a guidance counselor for what was formerly known as Walton Junior High in Bentonville.

She knows full well how her dad painstakingly worked on a monument to honor veterans, an idea brought forward by Bella Vistan Leonard Eisert. Eisert's brother had spearheaded the construction of a Wall of Honor in Mountain Home. The idea seemed fitting for Bella Vista, too.

Lead by the Veterans Council of Northwest Arkansas, the effort took root. Lisa Watten said her father spent four years, designing and working on the project, as others raised funds to construct it.

"It took four years, from start to finish," she said. Her dad was 79 when he began working on the design, she added.

Members began to sell bricks to raise money. Anyone who served in the Revolutionary War to the present can be honored, Eisert said.

The council -- first known as the Veterans Council of Bella Vista -- changed its name to envelope a broader scope, Eisert, the board's historian, said.

When the name was changed to encompass Northwest Arkansas, the group began to gain steam and garner more brick sales, Eisert said.

The monument, dedicated in November 2004, is unique in many ways. Eisert said the project's architect decided on the circle because that symbolizes protection from enemies.

"If you look at that circle shape, it's a strong symbol that keeps out the elements of destruction," she said.

"It's the strongest shape, as we understand physics," she said.

It's a tribute to his foresight and diligence that the monument still stands today, she added.

"He knew it would be there in perpetuity," she said. "He wanted it par excellence."

Her dad made several models. As a working artist, he would start with designs, build a model, then assess and revamp it, she said.

Watten worked on much larger-scale, professional projects. It was this tribute, however, that was near and dear to his heart.

"It's a testament to his design," she said.

Watten was a member of the Veterans of Foreign Wars his whole life. His service in the U.S. Navy was so important to him, she said.

Honoring all who have served -- and highlighting that in the most respectful way -- was his plan for the monument.

So many of the elements were well-thought, she said. From the overall design to the colors chosen, to the brick, the fountain, quotes and bronze ribbons, those elements symbolize "all things that are precious," Watten said.

The neutral colors create a peaceful place for visitors to reflect and remember.

Community members find rest and solace there. When she visits frequently, many people there are quiet, respectful and introspective, she said.

The monument creates peace for all who seek it, representing ideals such as liberty and the Constitution.

Her father embraced humanitarianism and wanted the monument to stand for all who had given their lives for others to enjoy their freedom, she said.

As others find comfort there, she, too, knows there's something more than brick and stone when she visits.

"I feel his presence there constantly." 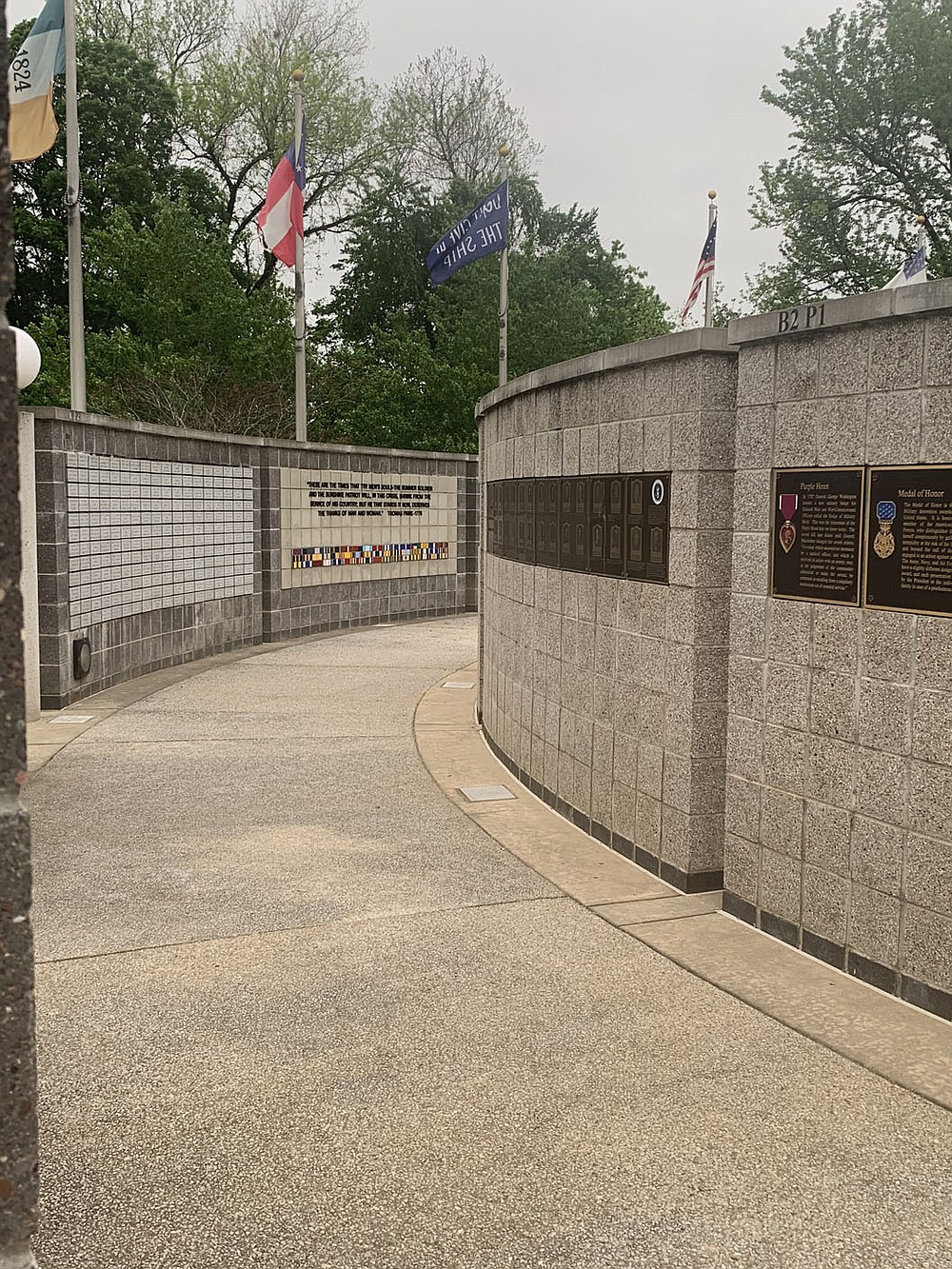 Photo by Sally Carroll/Special to The Weekly Vista The Veterans Wall of Honor, located at 103 Veterans Way in Bella Vista, offers solace and comfort to all who visit, said Lisa Watten, whose father served as architect for the project. 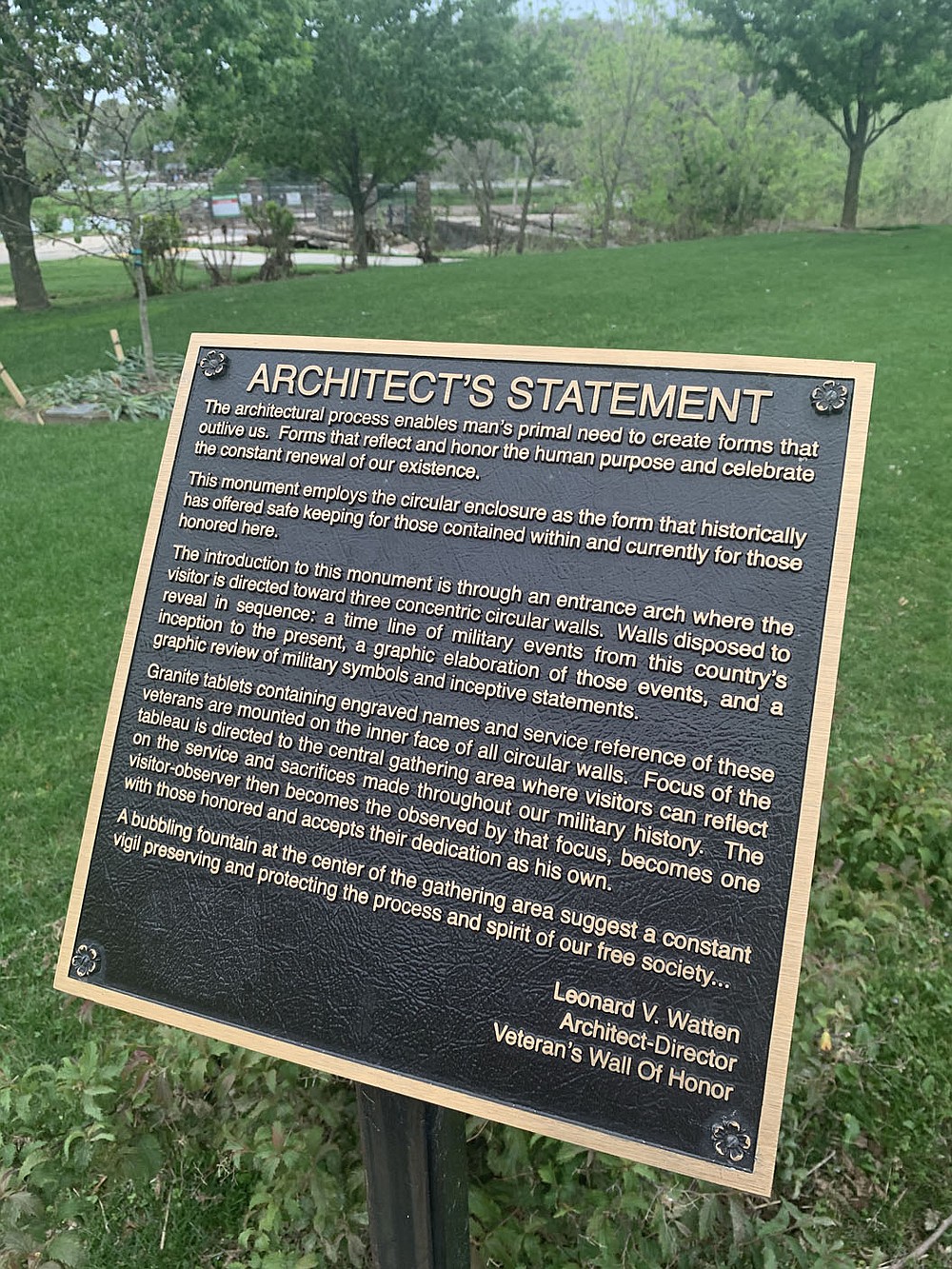 Photo by Sally Carroll/Special to The Weekly Vista Vern Watten contributed his thoughts as architect to the Veterans Wall of Honor. His daughter, Lisa, said her father went to great lengths to make sure the monument truly honored all veterans properly.
More News

Military service is not required for anyone who wishes to join and support the Veterans Council of Northwest Arkansas.

Though some people may think members are required to be active service or veterans, anyone is welcome, Lisa Watten, Veterans Council of Northwest Arkansas event coordinator, said.

Members are planning on expanding the Veterans Wall of Honor.

Historian Leonard Eisert said plans to expand the monument are exciting for the community. Places will be added to memorialize other veterans, he said.

Watten welcomes anyone who wants to join in the effort. The group is broad and encompasses the northwest Arkansas area. However, the group only has 42 members and so many more are needed, she said.

The Veterans Honor Guard also is need of members. Those who volunteer help provide an invaluable service for fellow military servicemen and women, she said.