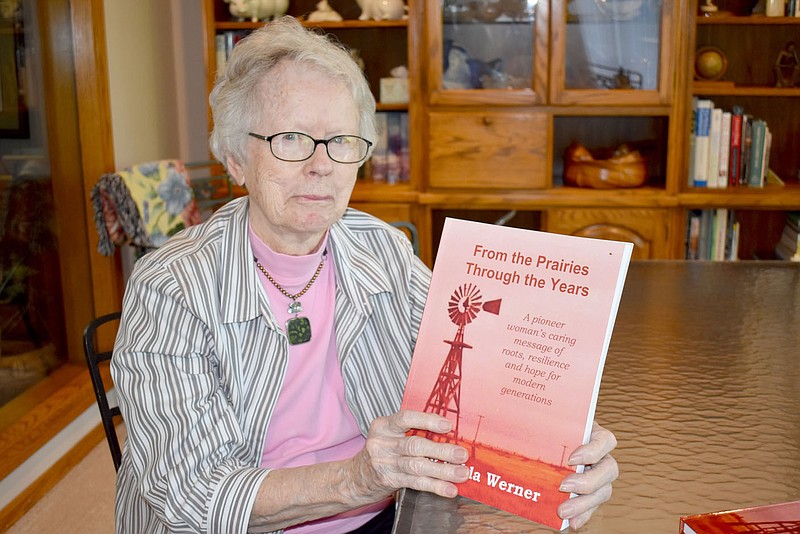 Rachel Dickerson/The Weekly Vista Wilda Werner of Bella Vista is pictured with a book she wrote about her life story. She wrote it while staying at home during the pandemic.

BELLA VISTA -- While many people were having trouble adjusting to being home alone during the pandemic, Wilda Werner of Bella Vista wrote a book and had it published.

"From the Prairies Through the Years" was published this spring.

She had previously thought about writing something for her grandchildren, and because she was staying home during the pandemic, she found herself writing and writing. Some time before, she had taken a workshop on how to write her life story. It proved useful.

"I would encourage everybody to do it," she said.

She said she wrote the book in hopes that her grandchildren would realize how their family history fit into the history they had studied.

She wrote about growing up on a farm in Scott County, Kan. Born just before the Great Depression set in, she wrote that she never knew she was poor because her family always had everything they needed. She told about farm life, her grandparents, dust storms on the prairie, wash day with an old-fashioned washing machine. She wrote about surviving World War II and meeting and marrying her husband and raising her children. She related stories such as riding to school in a buggy and the first time her family had electricity.

Werner said one of her assignments in the workshop was to describe the first kitchen she remembered her mother in. She said, in doing this exercise, she learned that one memory triggers another.

"I could write 10 pages about an old stove," she said. "You don't start with the whole picture, you start with one part."

Werner majored in biology in college and worked in a lab as a tissue culture technician for three years. She and her husband, Willard, were married 65 years. He was a family practice doctor and practiced for 41 years. They have three children, Carma, Steven and Cari, and four living grandchildren.

She said some of her favorite memories in the book were about raising the children.

"They all went off to the city and our grandchildren didn't grow up in a rural setting at all," she observed.

She said the hardest thing about writing the book was getting her sentences short enough.

"I can make a sentence last for a whole paragraph," she said.

Regarding how she feels about this accomplishment, she said, "There's a certain amount of satisfaction, but the grandchildren haven't read it yet, so I don't know if it's going to serve its original purpose."

"They have to write their own story," she added.

Werner has future goals as well. She is working with the same publisher to write a series of children's books on beginner science. She has been interested in the natural world ever since her maternal grandfather used to tell her facts about plants and insects on the prairie when she was a child. She plans to give the characters in the books family names. Her grandson is a cartoonist and will create the artwork.

"There's more to do here than you can possibly keep up with," she said.

"From the Prairies Through the Years" is available on Amazon.