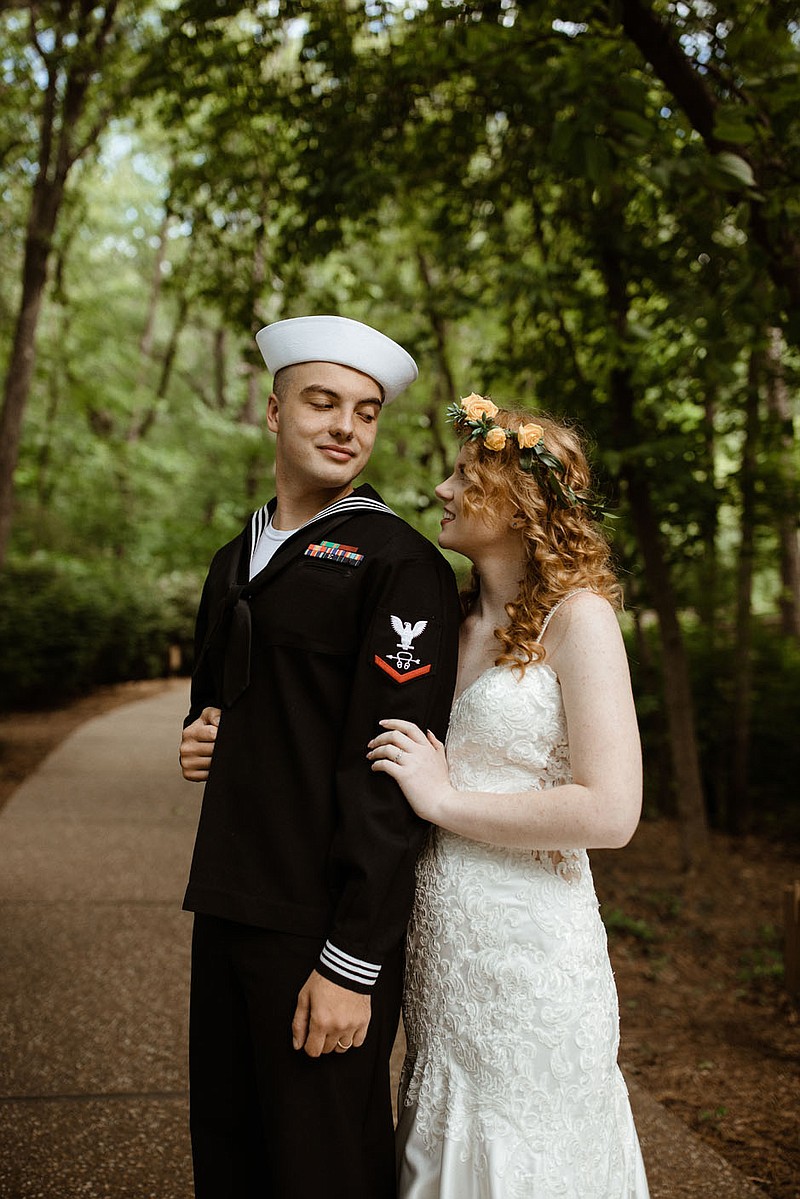 Photo courtesy Taylor Jean Photographs Rachel and Matthew Ezell, who married at the Mildred B. Cooper Memorial Chapel on May 29, will soon relocate to San Diego, California, where Matthew is stationed. They choose the chapel because of its architecture and the beautiful outdoor setting.

Rachel Campbell sent her beau, Matthew Ezell, a special care package with peanut M&Ms and special beef jerky for which he had to fight off his fellow Navy men.

Ezell, stationed in Japan, was 15 hours ahead of Campbell, but still messaged her through social media when he could.

"We found small ways to stay in touch," he said.

The young couple, now on their honeymoon, said they chose the Mildred B. Cooper Memorial Chapel as a wedding venue because it was so special.

"The first time I saw it, with the greenery, the trees, and then inside, the open windows ... it's so simple, yet so elegant," the bride said.

The groom echoed her thoughts. "It looks like something out of a storybook."

The couple married on May 29, a day with overcast skies -- which made for great photos, Rachel said.

Their photographer -- a friend from school -- is extremely talented and the couple chose her to capture the magic on their wedding day.

"She outdid herself," Rachel said.

Taylor Mailes, the photographer, captured a pose the two often strike, Ezell said. "We've done that since I enlisted," he said.

The pose was made famous after Japan's surrender, which effectively ended World War II.

For the Ezells, the "dip kiss" is something they've re-enacted since he signed up for the U.S. Navy in the winter of 2017.

The two have dated since high school. He knew she was the one when she embraced his dream for a Naval career.

"She looked me dead in the eyes and said, 'That is your dream. I'm going to help you find your dream.'"

The two have been separated -- his time in Japan spanned a year. During those times apart, the two have kept their love sparked across latitudes and longitudes.

Rachel said she knew he was the one because he seemed different than all the other guys, then "became my best friend."

The wedding was in the making for two years. Rachel, her mom, and her future mother-in-law basically planned the event and "Matthew helped where he could," the bride said, laughing.

Enlisting the help of a childhood friend -- and star photographer -- made wedding planning much easier.

Rachel was determined to have her friend help her.

Mailes, whose older sister almost booked the chapel in 2011, finds the chapel enchanting. Mailes' older sister began considering the chapel for her wedding, and that's when Mailes said she started "falling in love with it." She begged her sister to marry there, but to her dismay, her sister decided to marry elsewhere.

The Ezell wedding was the first time Mailes has taken wedding photos at the chapel. She said the architecture and the beautiful outside setting lend themselves for creative photography shots inside and outside.

The self-taught photographer is just 20 years old. She decided to pursue photography full-time, enrolling in several workshops led by other professionals so she could learn more tricks of the trade. She also took advantage of "fake wedding shoots," that the professionals offered. Those took the pressure out of the situation, she said, but gave her valuable experience.

Mailes started taking photos when she was 15 or 16 years old, accompanying other photographers when they went to capture wedding photos. As she took photos, she tried to learn from the pros, take different angles, and gain more experience.

Before launching her own business, she took photos as a secondary photographer at about 20 to 30 weddings.

Now, she said she's gained enough confidence and experience to "nail almost any idea," that the bride and groom have, she said, laughing.

The "dip kiss" idea was something that came about at the wedding when one of the bridesmaids -- another childhood friend -- suggested the couple re-enact that pose. Mailes explained that the Ezells struck that pose and captured it for their engagement announcement.

It seemed only natural, then, to see the couple enjoy a "dip kiss" on their day.

Mailes usually takes about 3,000 photographs to edit and review after she returns from a wedding. "I keep my finger on the button all the time," she said. Capturing impromptu and casual moments certainly add to a creative portfolio, she added.

The Seneca (Mo.)-based photographer, who serves the four-state area, has seen a dramatic increase in her business recently, mainly through word-of-mouth advertising. She's currently booked for six Saturday weddings in a row as well as four engagement sessions.

Capturing some sweet moments at her childhood friend's wedding, however, seems to be the highlight so far.

The bridal party's insistence on the "dip kiss" marks the beginning of a photo that can be remade in years to come, Mailes said.

"It gives them the chance to do that through all stages of life," she said. 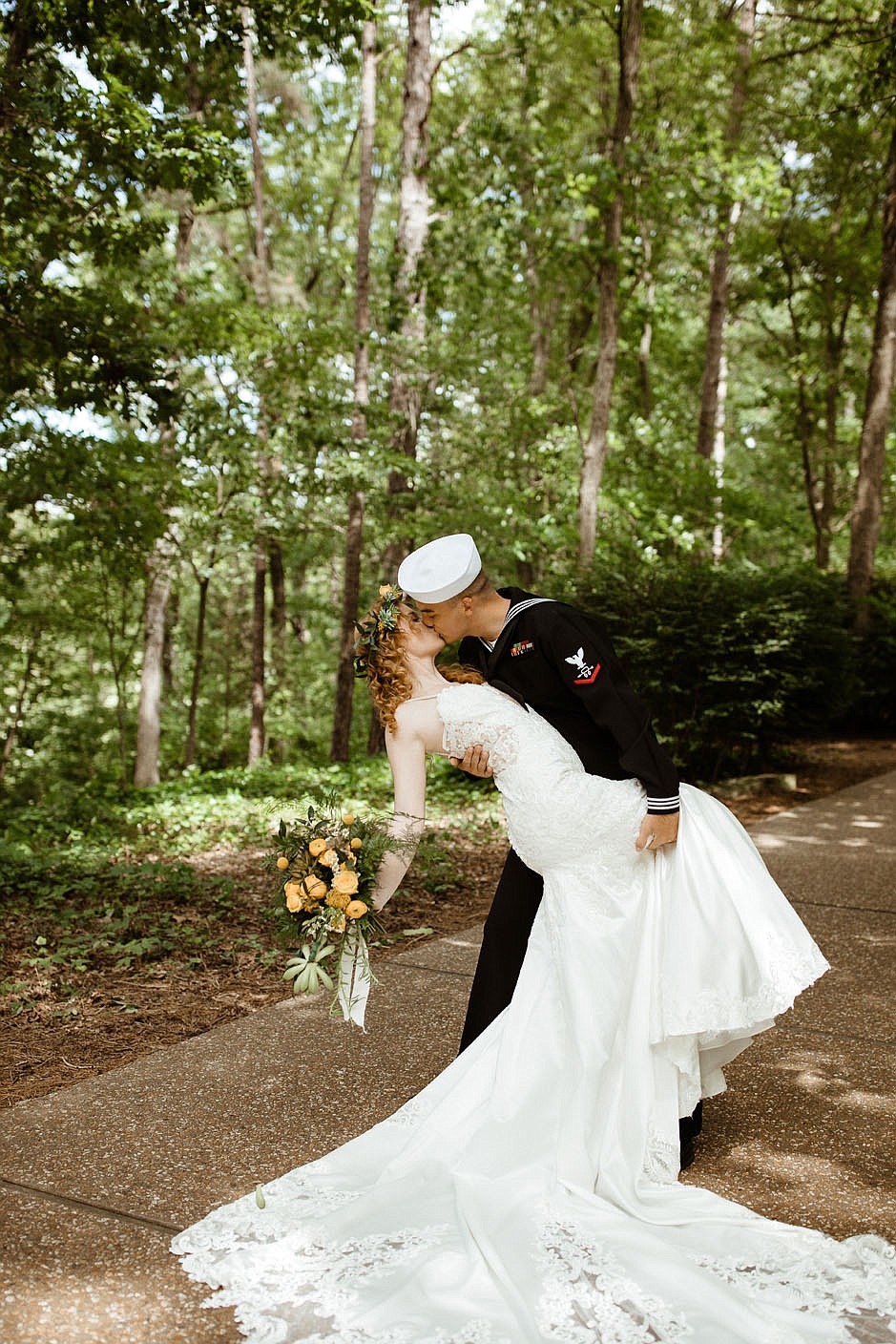 Photo courtesy Taylor Jean Photographs Photographer Taylor Mailes captures a "dip kiss" that Rachel and Matthew Ezell were encouraged to do by their bridal party. The couple announced their engagement with the same posed-photo, so those on hand thought a similar wedding photo would be fitting. The “dip kiss” is something they’ve re-enacted since he signed up for the U.S. Navy in the winter of 2017, Matthew said.
ADVERTISEMENT