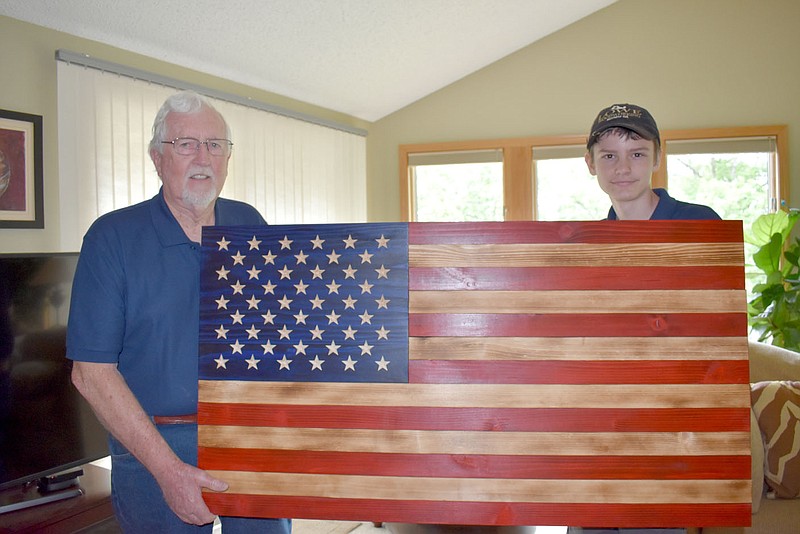 Rachel Dickerson/The Weekly Vista Don Lowe, left, and grandson Jeremiah Lowe are pictured with a large wooden American flag that they made together. They make many varieties of flags with different logos on the union.

Don said they have made nearly 200 flags, which come in small, medium and large sizes, and they have shipped them to 33 different states.

It all started when Jeremiah asked his grandfather if they could make a Betsy Ross flag for his dad. They did, and after putting it on Facebook, they learned that people liked it. The business, A Beautiful Flag, was born and grew from there.

"Some of these flags are very unique," Don said. "They've been very well-received."

He has a friend who has a CNC machine that carves the union part of the flag, and it is capable of making all kinds of intricate designs. With the help of this machine and a designer, Don and Jeremiah are able to supply their customers with custom flags bearing the logos of different military branches, police departments, fire departments, etc.

Don said he recently received an order for an Air Force emblem on the union part of a flag with the member's rank. The airman had just made E-9, he said. They charge $35 extra for a custom flag the first time they build it because the designer has to be involved. For subsequent times the same design is used, the custom fee is not charged.

To build the flags, Don said he purchases a special New Zealand pine at TH Rogers in Bella Vista. He has a sheet of paper with all the needed dimensions hung on a cabinet door in his workshop. He cuts the wood to the length of the stripes. One of the hardest parts is getting the stripes to line up properly, he said. He considers the grain of the wood, choosing a wide grain for the red stripes and a tighter grain for the white stripes. He said they are not against defects in the wood because they give the flag character, but they spend a lot of time gluing and sanding as a result of the imperfections.

Jeremiah demonstrated how they burn the stripes with a torch to give the flags a rustic look.

They glue the stripes together, put braces on the back and finish them with finishing nails. They spray clear enamel on the back and spar urethane on the front, which "kind of makes it snap," Don said.

They also offer a subdued flag, which is black and white. This is sometimes made with a blue line in it for police departments. The top-selling subdued flag has the Marine Corps emblem on the union, Don said.

On the website, ABeautifulFlag.com, there are Army, Navy, Coast Guard, Marine Corps, Air Force, police, and fire and rescue flags for sale, and more.

Don said he was in the Army from September 1966 to July 1969. He went to the Army Signal Corps at Augusta, Ga., and then was stationed at the Pentagon in charge of developing software. He was sent to Vietnam to give a class on new systems. He also traveled to several places including Germany, Okinawa and Hawaii. He said he was very fortunate with his military service.

"I bet most people who were in the service have a different feeling for the flag because they gave up a lot," he said.