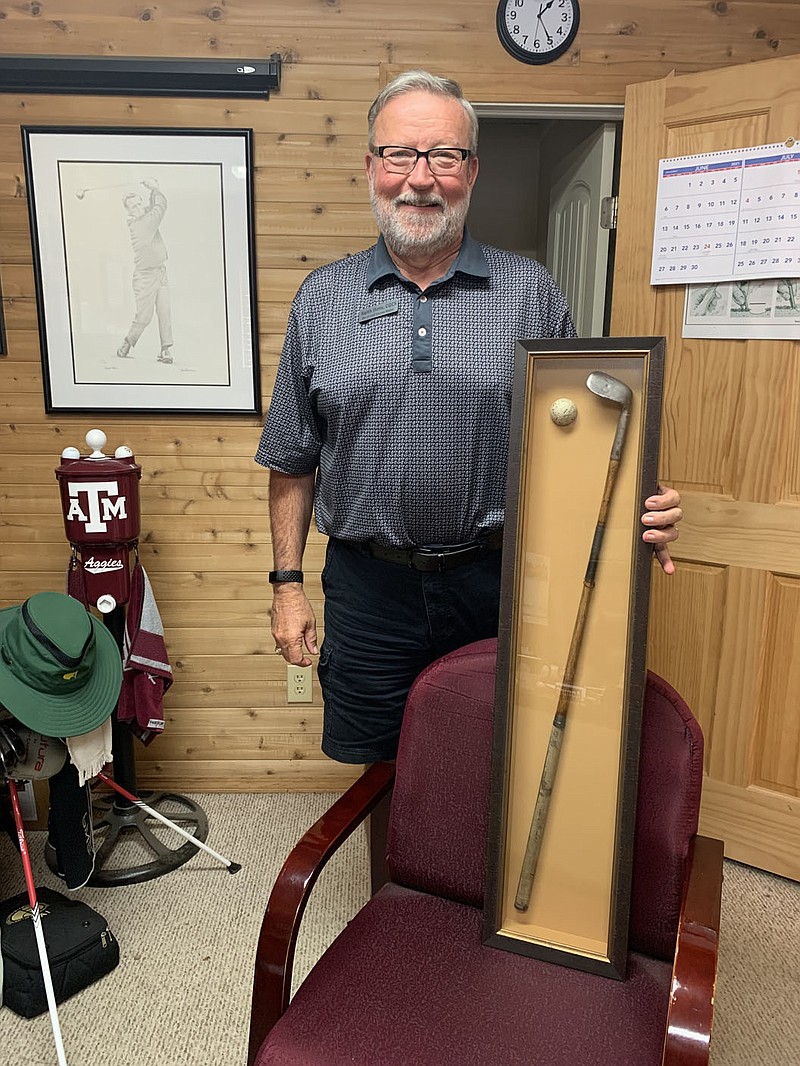 Sally Carroll/Special to Weekly Vista Keith Ihms’ club, which is a gift from a golf course architect friend, was made in 1880. It sports a hickory shaft and has the original grip. There are no grooves on the club’s face. The shaft is not flexible, like today’s titanium and other materials are. The golf ball was made in 1870. Ihms appreciates the historical value of those items, using the club during a special visit to Old Course at St. Andrew's.

Any day Keith Ihms can mix history and golf is a good one. So he relishes the day he swung a 141-year-old golf club on the historic course where golf first started.

Ihms' golf club, created by Old Tom Morris, is a uniquely crafted club that bodes no forgiveness with each and every swing.

Morris, whose real name is Thomas Mitchell Morris, was an architect, golf club maker and Scottish golfer, who won the British Open four times. Born in 1821, Old Tom Morris first began crafting golf club-type instruments by using wine-cork bottles pierced with nails. By the time he was 10, he began to play impromptu games of "golf" with his homemade clubs, according to historical accounts. Over his career, he became a master at golf, club creation and design.

Ihms enjoys showing off his Morris-created wedge, which features character, history and a bit of sentimentality. It's one of about 100 that Morris made, he said. "None were exactly the same because they were all hand-forged," he explained from his office, which overlooks part of the Berksdale Golf Course.

Ihms serves as the director of golf course maintenance for the Bella Vista Village Property Owners Association. He started his post here in 2014, bringing with him more than three decades of experience. His lifelong love of golf – and the history behind it – has piqued his interest in collecting such memorabilia. Ihms is particularly enthralled with Morris, who many in the golfing community refer to as their "beacon." "He's the keeper of the green, the Father of Golf," he said.

Ihms' club, which is a gift from a golf course architect friend, was made in 1880. It sports a hickory shaft and has the original grip. There are no grooves on the club's face. The shaft is not flexible, like today's titanium and other materials are. Play is challenging and standards are not the same. "It's a lot more difficult."

Ihms appreciates the history behind the club and the 1870 golf ball that accompanies it. He did not use the golf ball when he played the Old Course at St. Andrew's, but used the club in play. History records point to St. Andrew's as the first stop for the 18-hole round, back in 1764.

Ihms definitely wanted to play the course. He remembers being up on the green of the 18th hole, thinking it would be great if his shot went in. Instead, it hit the pin, which Ihms still considered a good shot. "It was really cool to hit it," he said.

The unique gift came to him from a friendship that evolved from golf. Ihms was working for the Bent Tree Country Club in Dallas, Texas, at the time, when architect Keith Foster was tapped to assist with the course's renovation. The two struck up a business friendship.

Then, approximately a decade later, Ihms – then at The Country Club of Little Rock – asked Foster to oversee that course's renovation. He agreed. Old pictures assisted Foster in the renovation which focused on taking the course back to its original design from 1902. "It's one of the oldest courses built," Ihms said. By then, Foster was well aware of Ihms' interest in historical golf items, and gifted him the club.

Ihms had the opportunity to travel a great deal in his role as president of a professional group, the Golf Course Superintendent Association of America (GCSAA). He decided his trip to Scotland – St. Andrew's in particular – would be the perfect time to use that club. He soaked in all the history, even touring Old Tom's shop, located by the 18th green.

Ihms enjoys how the make of golf clubs – and the game in general – have evolved over hundreds of years.

Overseeing golf course renovations has made him consider how he approaches his own particular line of work of golf maintenance.

When golf first started, golfers didn't have expensive, extensive golf clubs, or specially designed courses that were well-maintained. "It was the best you could do," he said.

These days, Ihms considers all those additional perks that golfers can lay claim to. Though his GCSAA board term ended in 2017, he and two others try to take an annual trip.

He teams with another GCSAA past president and the CEO to tackle the challenge of the game.

"The golf's not that good, but we have a heck of a good time," he said, laughing.

"Because I'm proud of this accomplishment, I have played Augusta National and all of the top 10 in the United States, according to the latest list by Golf Digest!" he said.