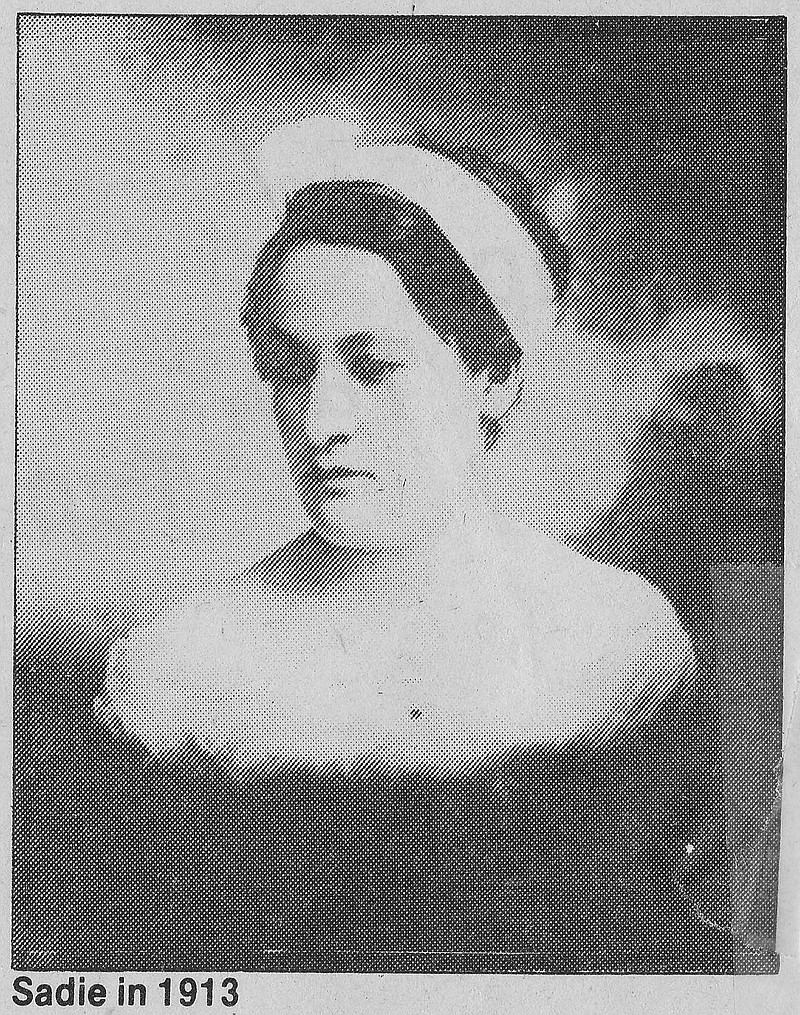 This is a reprint from a column written by Marilois Bach, entitled "The Grapevine," published 37 years ago in the Weekly Vista of March 14, 1984. Mrs. Bach was a regular columnist with the Vista for several years. Sadie Cunningham died in October 1984, just a few months after this column was published. She lived on a dairy farm but taught school for a number of years. Her family's house and barn were at the corner of what is now Riordan Road and Highway 71; Cunningham Corner is named after her.

Miss Sadie Cunningham, our Village Queen, our Number One pioneer citizen who has lived in the same house for 80 years, is indeed a charming lady. She has a generous amount of food for thought stored in her brain and she dishes it out by the plateful. Her speech is impeccable....I finally learned the secret of her charm. Sadie is Irish. Well, at least she is half Irish...Her baptized name is Sarah, and her father, Tom, was a red-headed Irishman. The Cunningham family came straight from Londonberry....

"I have noticed," Miss Sadie said a couple of weeks ago, "that when people get too much education, they lose their common sense."

We were discussing schools and school teachers.

"You don't have to hold a degree in psychology to know when a youngster is not acting right. Each one is an individual, and they must be handled individually." She chuckled as she continued her monologue.

"I would like to see one of those PhDs handle 60 kids in a one room school as I did. They wouldn't last a day."

"Teaching school was so much fun," she added. "We all had a good time."

Discipline problems? "Not many", she said. "Youngsters came to school with a learning attitude. The parents were anxious for them to learn, and kids wanted to learn to read because reading was a favorite form of recreation. The school term was only five or six months, depending on the treasury, and they all had to work hard to complete their schedule. Parents cooperated with the teacher. I would give kids a smack if they didn't behave. Each kid knew that their brother or sister might tell Mom and Dad if one got out of line. No, discipline was not much of a problem...and I had one boy in my first school who was 17 years old, only two years younger than I was."

Sadie went to Dug Hill School, and then to Bentonville High School. In high school she had a few weeks of "normal training," learning about classroom procedure. When she graduated from high school in 1913, she was a certified teacher. A college education was not required in those days.

"Morning Star" was the name of Sadie's first school, located on Highway 12, and the building still stands, being used for community meetings. She also taught at Valley View School, and once spent a year teaching in Washington state, but returned home when her father died in 1920, and has remained here ever since. Drok School was the name of her 60 pupil school, and it was located on Highway 71 at the spot where the Johnson Television store now stands. She finished her teaching career at Dug Hill, and this building is now a familiar landmark and a designated historical structure.

The three Rs were stressed in those early days. There was not much time for the fine arts. "We made maps in geography class, and colored them with crayolas. We had no music department, but everybody went to church in those days, and we did much singing in church," she said.

Playground supervisor? Sadie filled that job, too. She says she was a pretty good base runner. "When you taught school in 1914, you had to be able to everything," she said with a hearty laugh.

Miss Sadie has a built-in knowledge of child psychology, maybe learned at her mother's knee. Sadie was the oldest of six children and was her mother's helper....She told of two little sisters, and the little one was too young to go to school. The mother explained, "They bawl their heads off whenever they are separated. Please, may the little one come and just sit and watch?" Sadie was in agreement. The little toddler came to sit and watch and before long, she was also a learner. Sadie may have had the first pre-school.

Back in 1913 when Sadie began teaching, she was paid $35 a month....She always lived with a nearby family during the school term and paid them $10 a month board and room. So she had $25 a month to squander. Fringe benefits? Just going to work every day and enjoying it. "We had such a good time in school," Sadie says over and over again. There was no retirement plan.

In those days, each county had a superintendent of schools, an elected official. Miss Sadie thinks they did a great job with their very limited budget. She especially remembers Forrest Wood and W.E. "Bill Bob" Edwards....

What is wrong with the schools today? Not much, according to Sadie. But she thinks there is too much socializing, too much cheer leading, not enough homework, not enough homemaking mothers, too much TV. Sadie thinks it was better when the Dads made the living, and mothers were homemakers. "There is no substitute for a good mother," she says.

It does not surprise me that Sadie can rattle off the names of 55 of her first 60 students like a machine gun. It does not surprise me that many of her former pupils keep in touch with her by phone and personal calls at her home. Because there is no substitute for a good teacher either, Miss Sadie. Kids don't need computers and television screens in the school room. They need dedicated teachers who love to teach.