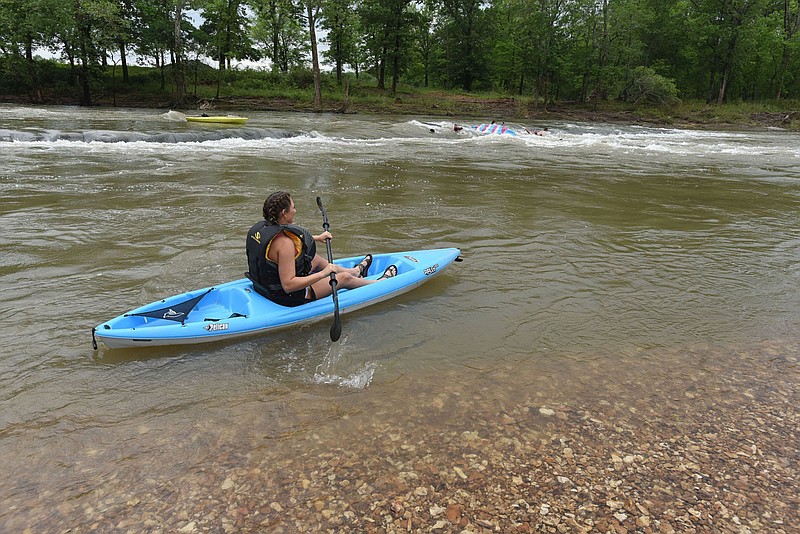 Every sport has its superstitions, even kayaking. Quincy McElyea of Fort Smith shoves off May 22 2021 to paddle with friends on the Illinois River at the Siloam Springs Kayak Park south of town. (NWA Democrat-Gazette/Flip Putthoff)

Hang around enough river rats and it's obvious pretty quick that every sport has it's superstitions, even kayaking.

Baseball players might wear the same pair of socks. Pro hockey players don't shave during the playoffs. With fishing, there's no limit on the number of superstitions like this one: Never bring a banana on a fishing trip.

I had no clue that paddling had it's own funky little beliefs. That is, until I fell into the rough company of some rag tag kayakers from Kansas City who traveled often to Beaver Lake to camp, paddle and cook fine campfire cuisine.

We were loading our kayaks on roof racks and trailers after a day on the lake when one of them mentioned the first superstition I learned. Always load your kayak so the bow faces forward. It's bad luck to put it on backwards.

That kind of makes sense anyway, especially if the stern of your kayak isn't as aerodynamic at the bow.

Another superstition also calls on real wisdom. The owner of the boat should always be the one to secure his or her own kayak to a trailer, roof rack or whatever. That way if it becomes unsecure and blows off in transit, only the boat owner is to blame. Always strap or tie down your own boat.

Sounds like more of a good idea than superstition.

It's bad luck to open an umbrella indoors, just like it's bad luck to put a two-piece kayak paddle together in the house. Best wait until you're at the water's edge.

Okay, I just made that one up. But you don't want to accidentally wack someone in the noggin toting that long paddle out the door.

There's one superstition my fishing buddy, Russ, and I try to pass on to every river rat we know. Always pick up any litter at the put-in before launching. It's fool-proof good luck.

We're firm believers that bagging up any trash is a good deed that not only leaves the launch site cleaner than you found it, it increases your karma with the fish.

Russ and I are such firm believers that we've been known to bring our own litter in case there's none around to pick up. On those rare occasions we might toss an empty can on the ground, then pick it up, just to get that fish karma.

I can tell you this friends and neighbors. Russ and I have never been skunked on any float-fishing trip. Hmmm. Maybe it's another superstition not to say things like that, lest you jinx your next trip.

Call them superstitions or call them myths. Will calamity really strike if you load your kayak on backwards? Doubtful, even if you do that and put your paddle together indoors.

So happy paddling everyone and enjoy our beautiful lakes and rivers. Just don't walk under any ladders before you head to the water.

Flip Putthoff can be reached at [email protected]