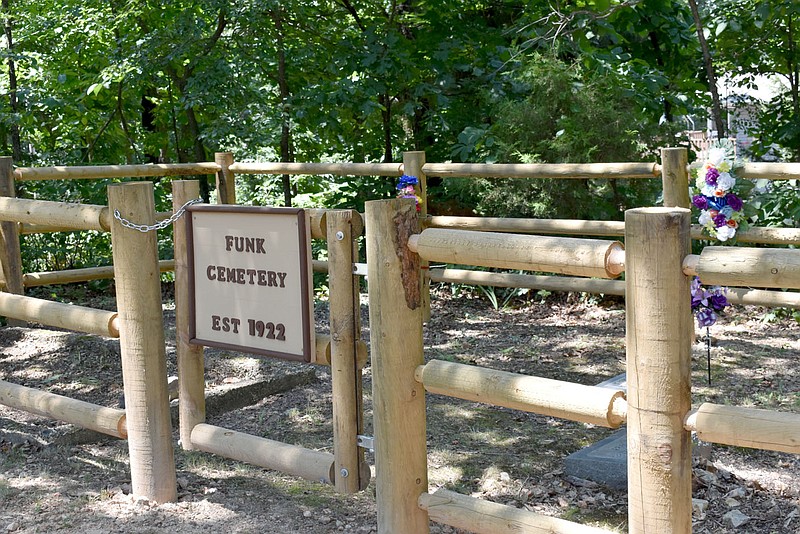 A group gathered July 13 at Funk Cemetery, where a new fence has recently been built thanks to the Bella Vista Foundation, the Bella Vista Historical Society and others.

Xyta Lucas, co-president of the Bella Vista Historical Society, thanked the Bella Vista Foundation for providing a grant that paid for half the price of the fence. She said an anonymous donor paid the other half. Her husband, Jim Lucas, made the sign on the fence with the cemetery's name and year of establishment, 1922.

She said Scott Morrison built the fence, noting he also built the fence around the settler's cabin located next to the Bella Vista Historical Museum. Also, Norma Rhodes provided decorations on the graves.

Lucas said the need for a fence came about due to a city ordinance that prohibits roadside markers. Some residents had noticed the decorations on the graves and mistaken them for roadside markers, as the cemetery is small and lies right along Sherlock Drive. There were some complaints, and so the decision was made to build a fence designating it as an official cemetery, she said.

She shared some history about those buried at Funk Cemetery. May Funk went to school at the old Rocky Comfort School, which was part of the property where the cemetery lies. When she found out as an adult that she had tuberculosis, she decided she wanted to be buried at the school yard. She married her husband Ted in 1908, and they had five children. She died in 1922.

Also buried in the cemetery is Freddie McCombs, whose niece married May's son. Freddie died a year after May. An unknown infant is also buried there.

Lucas said May's maiden name was Cooper, and her brother was CC Cooper, who built the settler's cabin that is now at the museum. She said Hiram Funk, May's father-in-law, had the largest ranch for miles, but the Coopers were poor, and the families did not have much to do with one another. Apparently they were not happy when their children married, she said.

Charlie Teal of the Bella Vista Foundation said this was the foundation's second opportunity to partner with the historical society, noting the foundation helped with the relocation of the settler's cabin to the museum grounds in 2018.