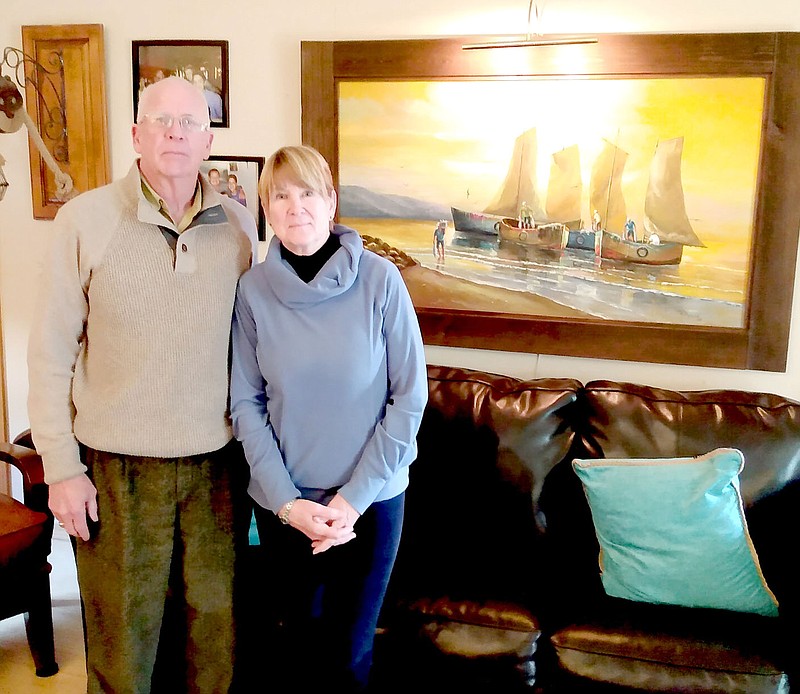 Keith Bryant/The Weekly Vista Bella Vista residents Phillip and Catherine Schoeppe stand in front of a painting they commissioned of fishing boats on the Ecuadorian coast.

Bella Vista residents Catherine and Phillip Schoeppe enjoy art, the outdoors and traveling all over the world -- particularly to Europe and South America.

Before living together in Bella Vista, the two lived in different hemispheres.

Catherine Schoeppe's family moved to Ecuador when she was 10 years old as her father, World War II navy veteran Capt. Michael Gordon, headed to the South American nation to chase business opportunities inspecting ships in the freshly-opened port at Guayaquil.

"He packed up his five children, his wife and his German shepherd and hauled us down there," she said.

He also started operating the first commercial tourist ship -- named The Buccaneer -- to the Galapagos Islands, which primarily hosted European travelers during its 45-day voyages, she explained.

Catherine Schoeppe said she managed several aspects of the 88-passenger ship, particularly cleaning, prepping and restocking it during the three days it stayed in port between trips.

When that business fell through, she studied nursing and became a cardiovascular surgery nurse -- a qualification she'd bring to Arkansas when she moved to the state on advice from her mother, who lived in the area, she explained.

After living in Ecuador for 40 years, Catherine Schoeppe said she came to Arkansas and worked for Northwest Medical as well as a clinic and as a Spanish interpreter when she lived in Springdale, though she had to quit when she moved to Bella Vista.

She studied insurance, she explained, and has worked in that field for the past decade.

Phillip Schoeppe said he grew up in Fort Smith and worked for Southwestern Bell for several years. He started as a lineman and was involved with a transition to digital telephony, he explained, and more recently he worked for an engineering firm.

When Catherine Schoeppe moved to the area, she made a detailed list of qualities she wanted in a man, she explained.

"And God sent Phillip into my life," she said. "And together we've made this home what it is today."

Phillip Schoeppe said the home has been heavily remodeled and decorated with art largely collected during their travels, as well as some of his own woodcarving.

He's also built a small chapel out in the back for his wife, he said.

Their home has been quieter during the covid-19 pandemic, he said, but typically they like to host friends and dance.

The two have 10 grandchildren, he said, and several of them are on their own adventures now.

While travel has been difficult recently, they agree that Bella Vista is far from the worst place they could be.

There are excellent events at Riordan Hall and great people to meet and mingle with, she added.

Phillip Schoeppe said they both enjoy the pools and outdoor scenery. He likes to fish and golf, as well.

They've been in Bella Vista 16 years, Catherine Schoeppe said, and they don't expect to go anywhere -- at least not permanently.