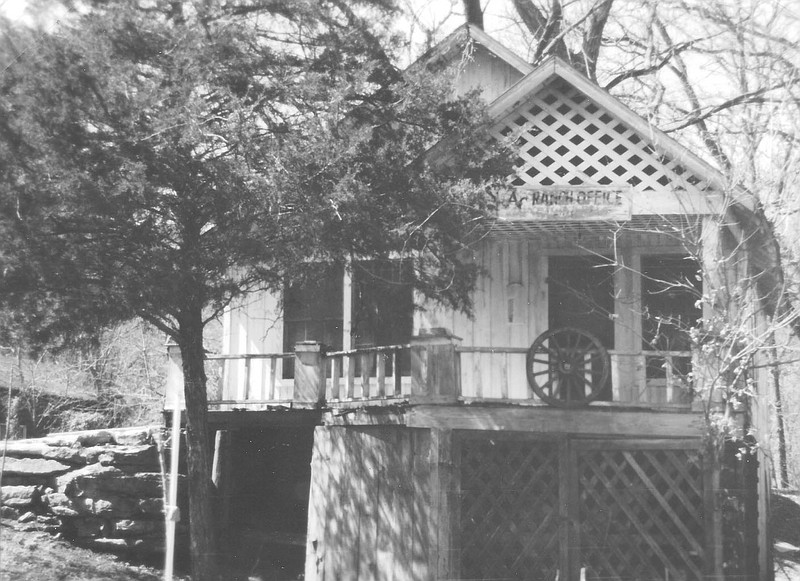 Photo submitted Linebarger’s AC Ranch Office is shown in April 1993, in a photo taken by Gilbert Fite a few months prior to publication of his book on the history of Bella Vista.

As noted by Arkansas historian Tom Dillard in his Sunday column in the "Democrat-Gazette" on January 3, and by Maylon Rice in the "Weekly Vista" of January 6, Arkansas lost a very valuable contributor to Arkansas history when Ellen Compton died in 2020.

Dillard wrote in his column, "I know of no one who contributed so much to preserving Arkansas historical records and manuscripts. For 30 years, she worked as an archivist at the University of Arkansas Special Collections Department, much of that time as a field archivist."

Ellen's younger sister, Edra Compton, was the best friend of Carole Linebarger Harter during their childhood. Their parents were good friends, and Carole knew Ellen quite well also. Ellen and Edra were the daughters of Dr. Neil Compton, who spearheaded the effort to make the Buffalo River the first National River in 1972 and later became an active member of the Bella Vista Historical Society.

Carole's grandfather, C.A. Linebarger Sr. and his two brothers established the Bella Vista Summer Resort in 1917. In a cottage he built just north of the log house (now known as the former Artist Retreat Center) on present-day Highway 71 across from Lake Bella Vista, he set up his AC Ranch Office (a name he came up with by reversing his initials). After the Linebargers sold the resort to E.L. Keith in 1952, the AC Ranch office sat mostly unused.

Carole said, "Ellen was a favorite of my grandfather and she continued to visit with him. He told her that people were breaking into the office and taking things, so she became very concerned about what was going to happen to all those documents that were a valuable part of Bella Vista history."

C.A. Linebarger Sr. died in 1978, the last of the Linebarger Brothers. By then his granddaughters lived far away, in California or Hawaii.

Per Carole, "After the Bella Vista Historical Museum was established in 1985, Ellen contacted those early museum volunteers, and started an effort to salvage everything still in the AC Ranch office. She is the person responsible for rescuing a huge collection that was subject to a building crumbling down around it and likely to destroy everything in it."

The museum volunteers helping with the effort at the time were George Phillips, Gilbert Fite, William Cates and Larry Swaim.

Ellen and the museum volunteers brought the matter to the Linebarger granddaughters' attention, resulting in Carole and one of her sisters, Charity George, visiting the office in the summer of 1988 to sort through what was there and what they might want to keep.

The "Weekly Vista" of July 20, 1988, reported on that exploration, "Layers of dust have covered the furniture in Linebarger's four-room office, but as a shield of protection, it maintains the items inside the room in good condition."

The "Benton County Daily Democrat" of Sunday, July 3, 1988, featured a full-page spread on that visit.

Charity is quoted in that article, "(Grandfather) wanted this office sealed for 20 years after his estate was settled, and we've tried and tried to figure out why. ... The mystique of sealing the place up for 20 years, I guess, that would appeal to him. We never could figure out why he'd want this place sealed up. ... It hasn't been quite 20 years, almost, but I don't think (he) realized the condition of this old place. The roof's beginning to leak in the back room. It was only a matter of time and all of this stuff would have been destroyed."

(Editor's note: The cottage was demolished a few years ago when it was determined that it was beyond saving.)

The April 27, 1989, issue of the "Daily Record" reported that Ellen and another field archivist, Michael Dabrishus, head of the UA Mullins Library Special Collections, went to the AC Ranch office that spring, working with museum volunteer Larry Swaim, to begin to sort through the old documents and artifacts.

Ellen was quoted as saying, "We're looking for family and business history here. So far, the true history of Bella Vista hasn't been written, isn't completely known because these records haven't been used. Tourism is the biggest industry in Arkansas, and Bella Vista had an impact on that industry in the 1920s, just as it does today, perhaps more so then. One family, the Linebargers, operated the then biggest tourist resort in the state. ... C.A. died in 1978 and no one seemed to realize what was here. The history of Bella Vista has never been fully written from C.A. Linebarger's and the 1930's point of view. This information has state and regional significance."

(Editor's note: Four years later, Bella Vista Historical Society president Gilbert Fite published his book, "From Vision to Reality: A History of Bella Vista Village, 1915-1993," using a great many of the documents Ellen and her team found and organized.)

The "Weekly Vista" of May 2, 1989, ran a story on that same visit, reporting further on Ellen's comments, "All these things are important because a lot of the area's verbal history is disappearing -- Linebarger Sr. and Sadie Cunningham are both dead. The reason all these papers are important is because the 1920s was the heyday of automobile development -- this (the development of old Bella Vista) was tied to it. Other resorts at the time -- Sulphur Springs, Siloam Springs -- were based on the railroad. The railroad built the resorts. But a family did this as a business."

Dabrishus noted, "It's going to take time to get all this into a usable state -- a year or longer, easily." He added that, for normal collections, a staff member would be assigned to sort the material and make a file showing what is in each of the boxes but, because the Linebarger collection is so large, a student assistant will probably be assigned to aid in the work.

They ended up with forty boxes of materials in the University of Arkansas Mullins Library Special Collections under the name of Linebarger Brothers, which can be viewed by appointment only, in Special Collections. Other materials and artifacts were donated to the Bella Vista Historical Museum.

As Carole Linebarger Harter recently said, "Ellen dusted off mold and mildew and organized boxes and boxes of working papers, including many letters that had been exchanged among the three Linebarger brothers as they built up the resort business, letters that were dated from 1917 through both world wars up until their deaths, and as a result of her efforts, those letters remain intact and readable. It made a wonderful collection, all to the credit of Ellen Compton."

Several years ago, Carole photocopied a number of those letters and organized them in a binder that is now available for viewing at the Bella Vista Historical Museum. A number of the artifacts salvaged from the AC Ranch office are also on exhibit at the museum.

Lucas is a volunteer with the Bella Vista Historical Museum, located on Highway 71 next to the American Legion building. The museum is open Saturdays and Sundays, 1 to 5 p.m., with covid restrictions in place. Admission is free.