Courtesy Xyta Lucas The present day Cliffside building went by the name Hampton Place from 1987 to 2020.

Some readers may have noticed that, as they travel south on Highway 71, the sign for the building on the west side of 71 across from Lake Bella Vista no longer says "Hampton Place" as it did for 33 years. It now says "Cliffside."

The history of the building called Hampton Place starts in 1987 when Gerry and David Kowalski bought the property and built the building that still stands there. In a recent telephone interview, Gerry Kowalski said, "In our travels through various states, David saw the Hampton Inn name and thought it sounded classy, but we couldn't use that, so he came up with Hampton Place instead." She continued, "When we bought the former building, it was the old Keck store, and we had the Fire Department burn it down in a training exercise."

The April 15, 1987, Weekly Vista contained pictures of the fire and reported, "It took over three hours for the old Keck's Grocery building to be destroyed."

The history of that old grocery building goes back to the 1920s. The Linebarger Brothers bought the property as part of the Bella Vista Summer Resort that they opened in 1917. When they hired Lillian Green to become their secretary in the late 1920s, she had a house built on that property to become her home. In the late 1930s, she developed an interest in photography and, while she kept her day job as their secretary, she became a professional photographer and added a studio on to her home. She sold her Bella Vista area photos for a variety of magazine covers and even sold some to jigsaw puzzle manufacturers. (Many of her photos are available for viewing in the Bella Vista Historical Museum.)

Though she never married, Lillian Green raised her niece, Nadine Logston. In fact, it was in her attempt to get Nadine a role in the Jesse James movie being shot in nearby Pineville, Mo., in 1938 that got Lillian interested in photography (and Nadine did get a role). However, in the early 1950s, by which time Nadine had grown up, Lillian became ill and moved out of state to live near her siblings.

The youngest of the Linebarger Brothers, C.A. Linebarger, continued to own the property until 1967, at which time he sold it to another owner, who a year later sold it to Clark and Laura Keck. They decided to convert Lillian Green's house into a store. The Keck's had married in 1964 and moved to Bella Vista in 1966 from Manhattan, Kan. He worked full time as a salesman for Cooper Communities, being named as Salesman of the Month for May 1968, in addition to operating the store.

At first, the Keck's called their store the "El Sombrero Gift Shop and Mini-Mart." The May 1968 Village Vista reported that a new business by that name had opened in April on Highway 71 just south of the headquarters area (at that time, Cooper's headquarters were at the west end of the Lake Bella Vista dam in the former motel and restaurant complex that E.L. Keith had built in the 1950s). The store offered groceries, vacation supplies and authentic Mexican imports.

By May 1969, the store had been expanded to a full service 7 to 11 grocery market, according to the Village Vista. The Keck's had decided to discontinue the El Sombrero Gift Shop, and they built a new addition at the rear of the house to increase their grocery sales space.

By June 1970, the Keck's were running ads in the Village Vista for their "Colonial House Food Market," still open 7 to 11. However, at some point, they gave up the business and sold the property in 1980. It eventually ended up in the hands of the First National Bank of Bentonville, from which the Kowalskis' bought it in 1987. They had the former house/store burned down and built their new building.

The January 20, 1988, Weekly Vista reported, "A new building complex has recently opened in Bella Vista. Located one-fourth mile from the Bella Vista Information Center, Hampton Place provides easy access from Highway 71. There are five offices in the complex. Three have officially opened for business. ... Two insurance offices are scheduled to start their business in the near future."

The Kowalskis' had owned a beauty salon in Michigan for over 30 years, with 30 employees, but when they were approaching 50 years of age, they decided it was time to slow down a bit, so they moved to Arkansas. David sold real estate part-time, and Gerry began working for Allstate Insurance, which had become one of the tenants in their new building. They owned Hampton Place from 1987 until they sold it in 2002, although the building retained that name for another 18 years through two more owners until the present owner bought it in 2020 and decided to change the name to "Cliffside."

The Kowalskis' decided to move back to Michigan last September to be nearer family but still have fond memories of their years in Bella Vista.

Lucas is a volunteer with the Bella Vista Historical Museum, located on Highway 71 next to the American Legion building. The museum is open Saturdays and Sundays, 1 to 5 p.m., with covid restrictions in place. Admission is free. 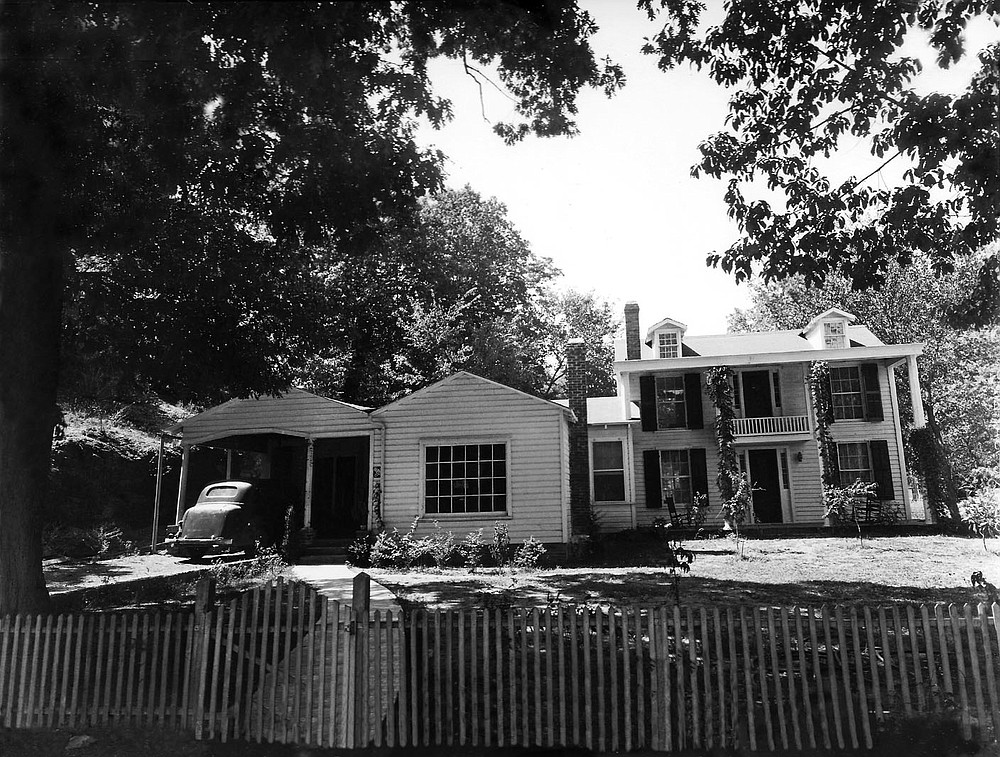 Courtesy Bella Vista Historical Museum The first house on the property where the Cliffside building stands now was the home of Lillian Green.
ADVERTISEMENT