Revved up for the rush 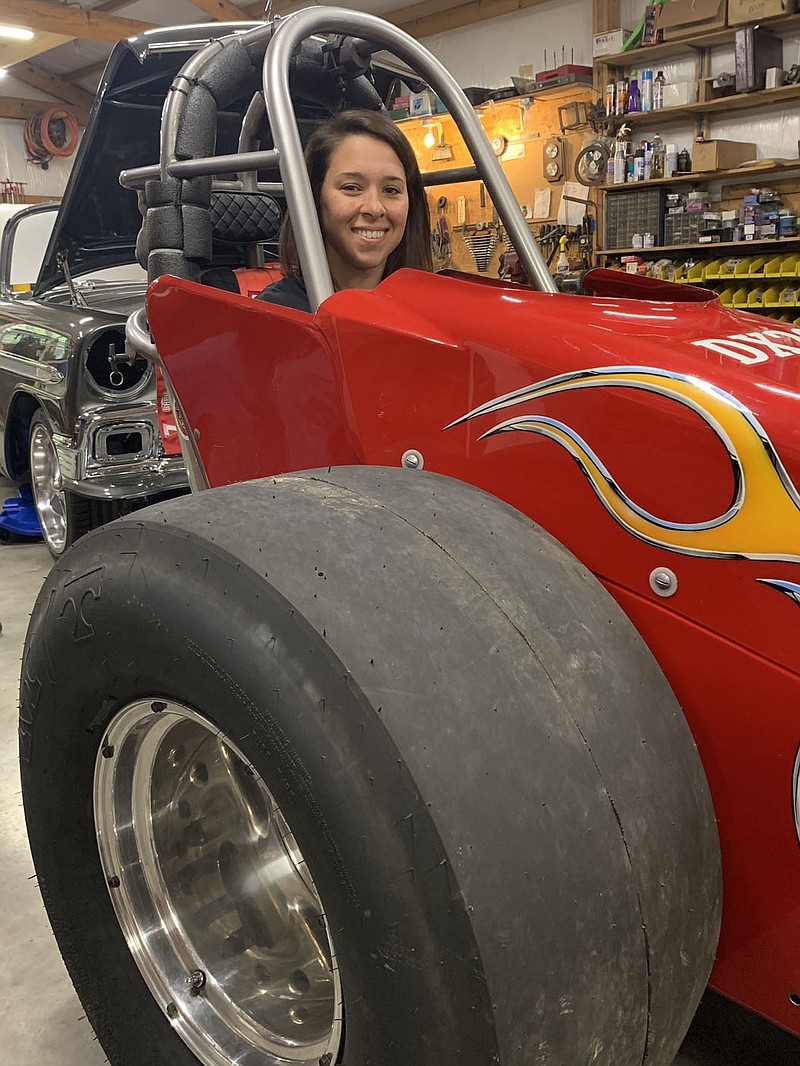 SALLY CARROLL/SPECIAL TO MCDONALD COUNTY PRESS Deni Jensen shows off her dragster she races. The married mom of two carves out the time for racing, despite a busy schedule of work and family.

The engine roars, and the fumes from the fuel fog her eyes a bit. Deni Jensen is ready to flip down her visor on her helmet at the last second and waits until the fumes clear out. She wants to have clear vision. She's ready to race, hoping to beat her best time of racing, 8.2 seconds in a quarter of a mile span.

This young, married mom guns the bright red drag racer as soon as she sees that green light.

"I go straight back," she said. "I just floor it. My helmet shakes a little bit."

The rush of drag racing isn't for everyone. It's a little dangerous. It's expensive to buy cars and compete. It's a long Friday night, traveling for two hours, hauling two 50-gallon drums of fuel. After the competition, you have a long trip back when you're already exhausted, she said.

For Jensen, it's a balancing act. She helps her husband Matt operate their Pea Ridge-based landscaping business and his construction business. He's on schedule to build 15 houses this year.

"You make the time," she said, smiling.

Jensen, of Pea Ridge, is largely supported by her father, the on-hands crew guy, who is the go-to guy on race nights. He refuels her car, gives advice and does everything possible for a successful run.

Kenneth Trussell began racing in 1981. He was never interested in the more competitive bracket runs on Saturdays, but "enjoyed making the runs" on Friday nights. His engineering and mechanical experience comes from building drag racing cars from the ground up. Of the more than 100 cars he's owned, Trussell has built about 80 of those himself, Jensen estimated. Trussell tries to find the right combination of the tires and engine by testing and tuning, trial and error.

"When you dial that combination to the nth degree, and you find that sweet spot, you'll have success," he said.

On this Saturday morning, Trussell is working in his Pineville garage. He and his wife's farm allow him the room to work on the cars. Jensen's car, which they purchased in Ohio, has been rebuilt. But the bright red drag racer with painted flames can stand for improvement, he said. When he finishes, the car will allow Jensen to go from zero to 180 miles per hour in about seven and a half to eight seconds, he said.

How addictive is the rush of racing? "I'll tell you how addictive it is. I've been doing this for 65 years," he said. These days, he observes his son making improvements, keeps track of statistics, and enjoys watching his granddaughter, great-granddaughter and great-grandson race. Jensen's daughter, Harper, who is just nine, races in the junior drag racing competition. So does Jensen's nephew, Tristan, who's also nine years old. They all race "as much as we possibly can," Jensen said. Last year, the trio traveled to and competed in 11 events. They hope to compete more this year, focusing on Oklahoma and southern Texas. In May, they plan to hit Mo-Kan, which is located 20 minutes from Joplin.

All hands on deck help out Jensen prepare for her races on Friday night while, at the same time, helping the children race in the junior category just a few lanes down from her. It's a constant crazy Friday night. Jensen tries to get in as many runs as she can, bettering her time and learning from each race. The drag racer, enabled to travel at high speeds, burns a great amount of fuel. That's why they have to take fuel with them. Trussell refuels her after every run, she said.

In turn, Harper runs as many races as she can. Harper admits that drag racing is "kinda fun," which her grandpa says really means, "fun." The most difficult aspect of racing is buckling in and out, Harper said. A five-point harness system ensures the driver is as safely secured as he or she can be, Jensen explained.

Her cousin, nine-year-old Tristan Roughton, loves to race, too. His favorite part is the launch. Of course, both admit that hitting the gas and "going really fast," is a thrill. Jensen admits that some might consider drag racing a little dangerous. She likens it to sky diving, which has a certain element of danger, she said.

Her dad, who experienced a scary gallbladder situation five years ago, said he believes that when it's your time to go, you go, no matter if you play it safe or not. His medical scenario spurred the doctors to advise calling in family.

A person could die in the recliner watching Wheel of Fortune, he said. "There's no use going around being afraid of things," he said.

Jensen echos those thoughts, while taking a little extra step every race.

"I say a little prayer every time," she said.

When her daughter, Harper, races, she's running the distance at about 75 to 80 miles per hour in about 8.9 seconds, though it's a shorter span than hers, she said. She's concerned for her safety, yet also feels that her headstrong daughter is on the right track.

"Why not let her do what she wants to do?" she said.

Drag racing is not for sissies. Paying for the cars and the competition fees isn't either. "It's not a cheap sport," Trussell said.

Her dad believes in improving each car to its maximum capacity. The competition is guided by restrictions and regulations, with classifications or indexes for each type of car. The hot rod that Jensen drives has a sticker of certification on the inside, he said, pointing out that the car has been inspected by the National Hot Rod Association. The chassis is certified as a 750 index car. All the improvements he makes are certified.

It's that fine-tuning that motivates him -- and giving his daughter sage advice. Though she's only been racing for about a year, Jensen hopes to better her standing, gain experience and win some bigger money in competitions. For now, she really enjoys taking on some heated races. Other racers don't see her name before the race -- but hear it. They may think she's a male, she said.

When she walks around before a race, others don't know she's a competitor. She doesn't wear make-up, she said, because you get hot, sweaty and smell a little like fuel fumes. So, when she takes off her helmet after a race, her fellow male competitors are often surprised. 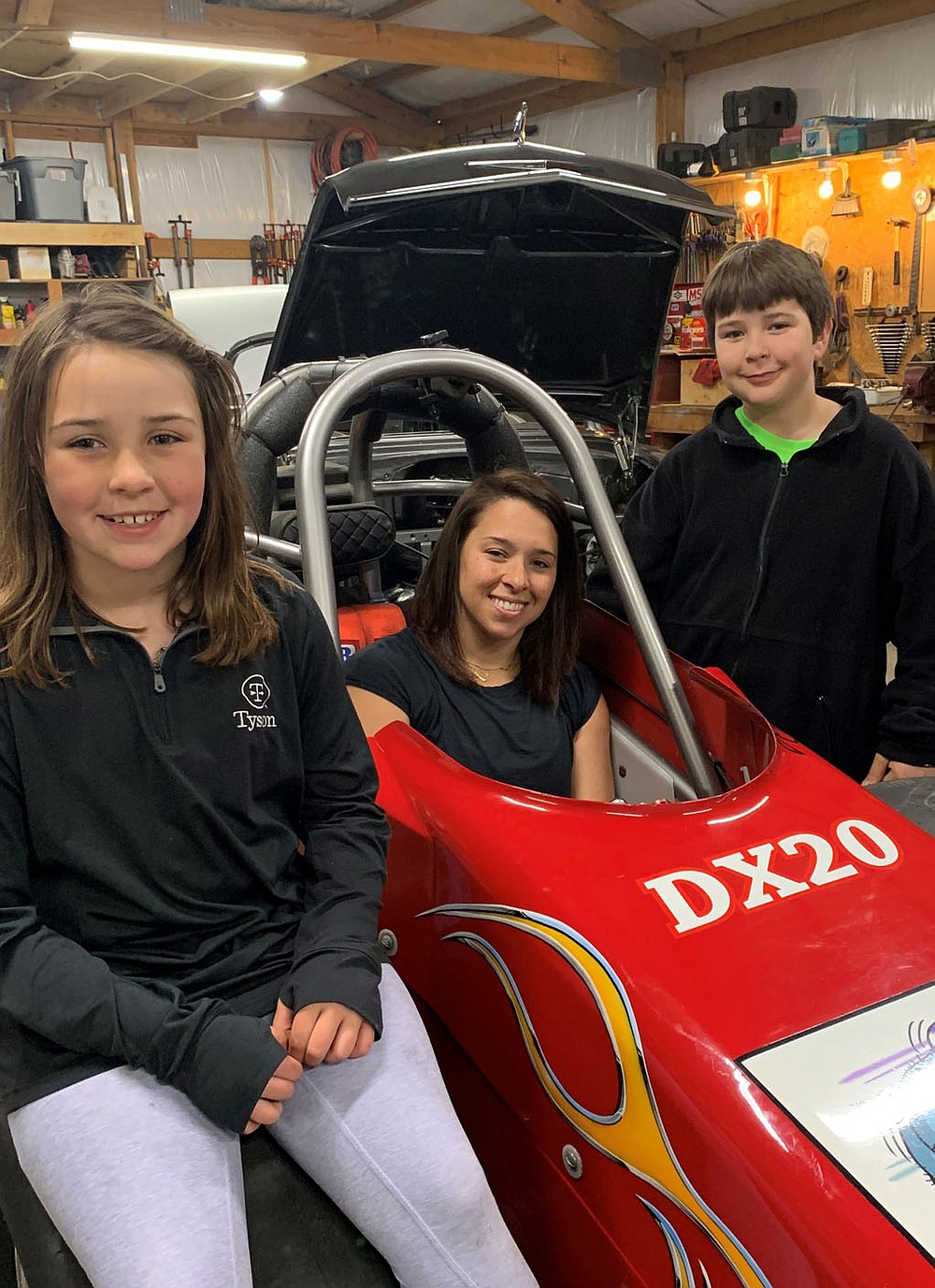 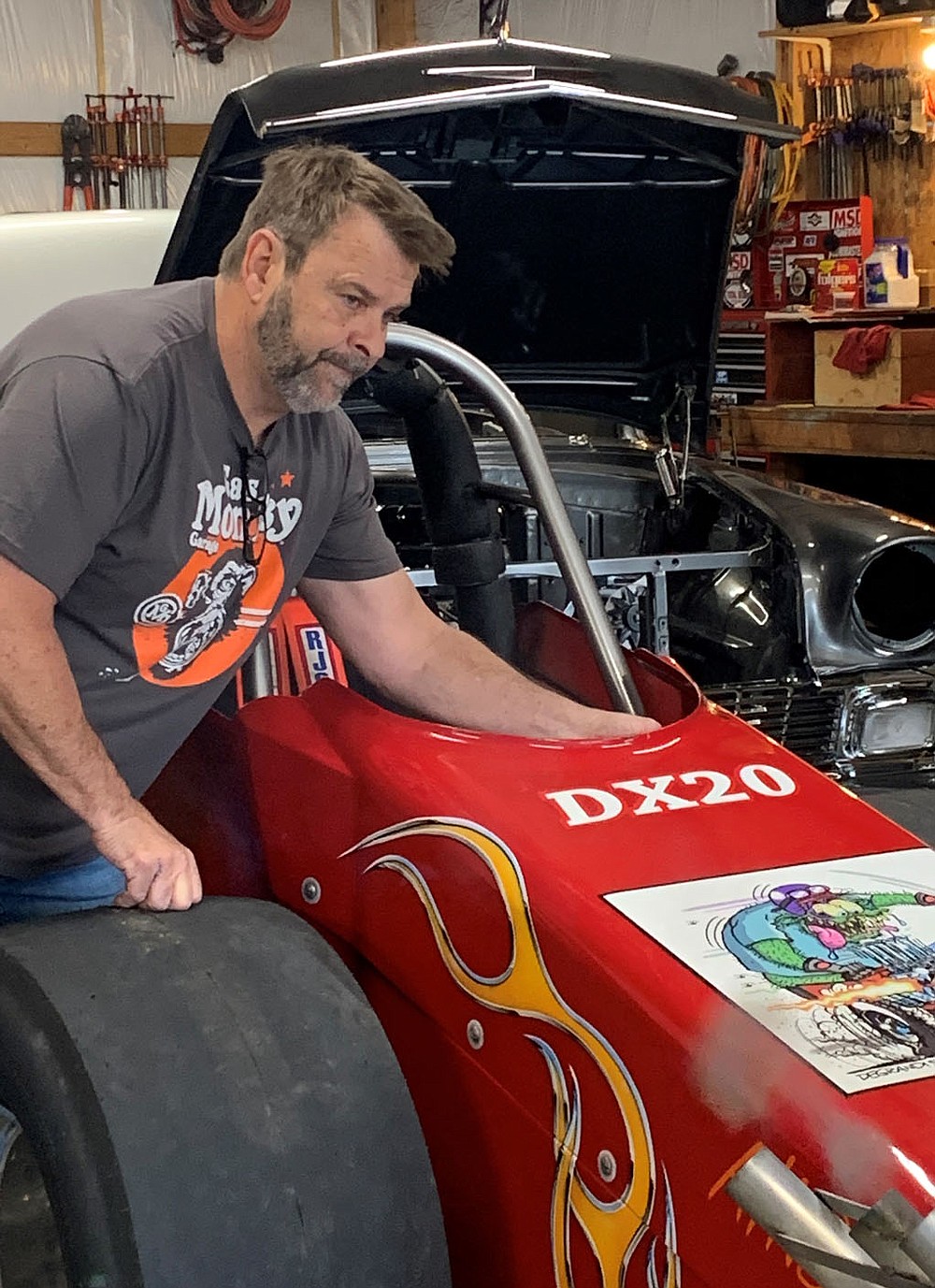 SALLY CARROLL/SPECIAL TO MCDONALD COUNTY PRESS Kenneth Trussell fires up his daughter's dragster. Trussell, who started racing in 1981, enjoys rebuilding cars. His daughter, Deni Jensen, said her dad has rebuilt about 80 of the 100 cars he's owned. 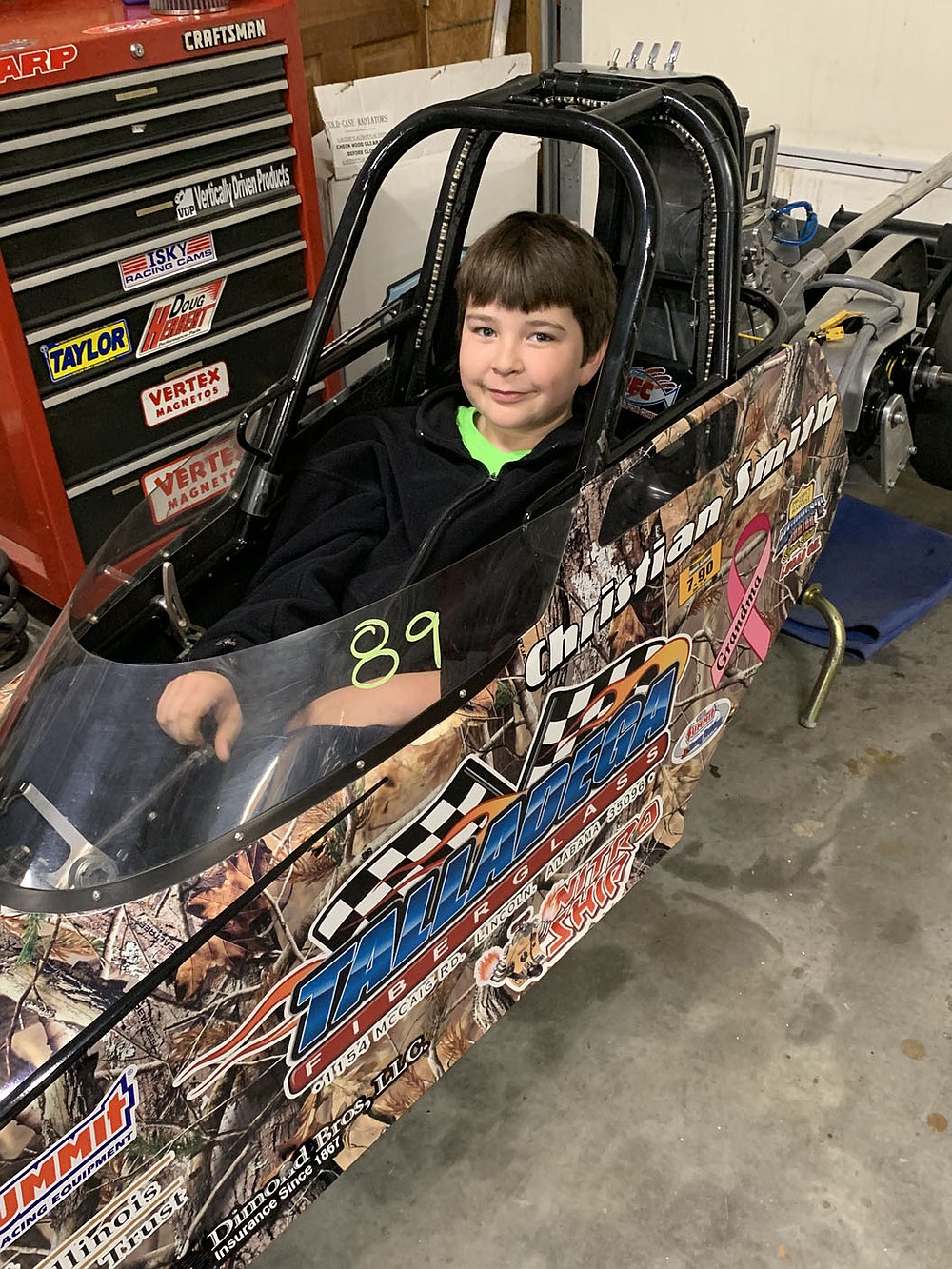 SALLY CARROLL/SPECIAL TO MCDONALD COUNTY PRESS Tristan Roughton, 9, enjoys junior drag racing. He and his cousin and his aunt compete regularly when the weather allows them to do so. 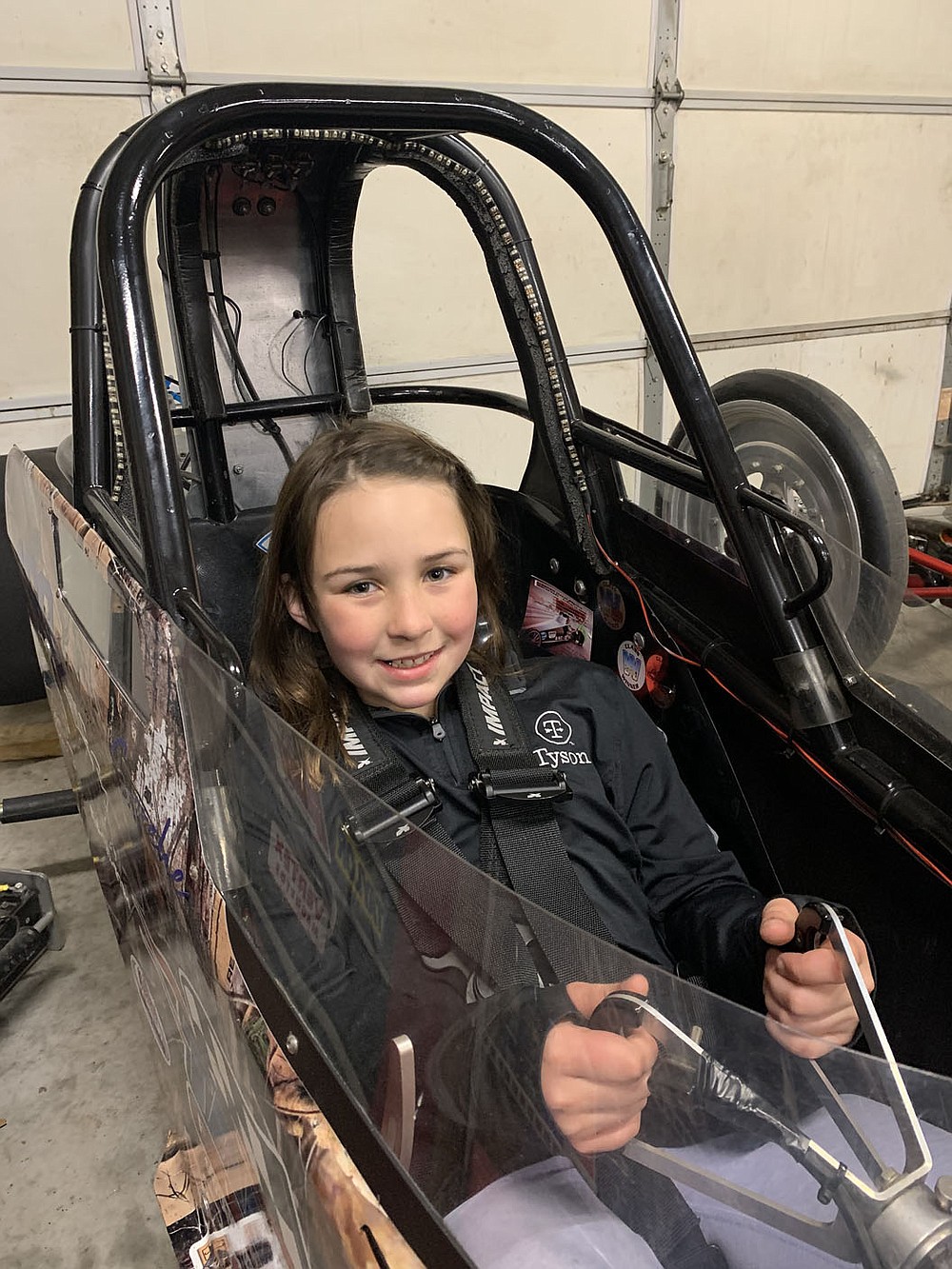 SALLY CARROLL/SPECIAL TO MCDONALD COUNTY PRESS Harper Jensen, 9, loves to drag race. She is guided by her grandfather, Kenneth Trussell, who helps her. Harper's mom, Deni, and cousin, Tristan, also race alongside her.
More News