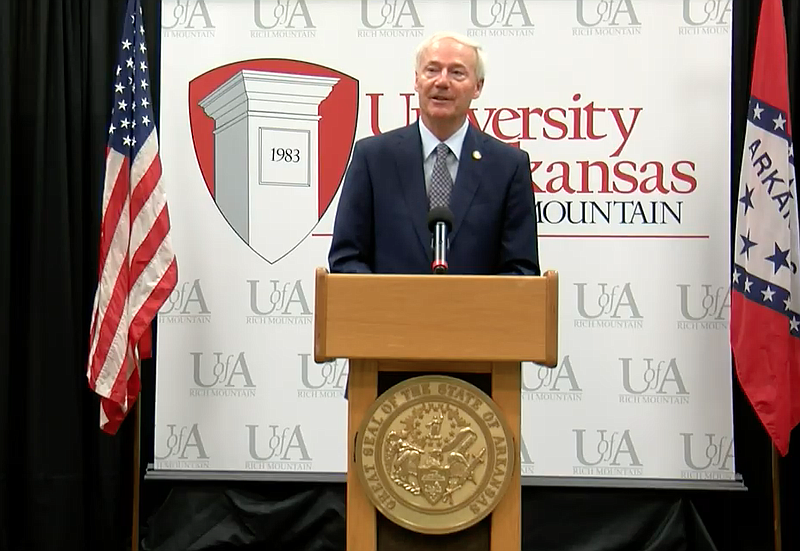 Arkansas Gov. Asa Hutchinson speaks to reporters at the University of Arkansas Community College at Rich Mountain in Mena on Friday in this still of video provided by the governor's office.

Arkansas on Friday saw 1,107 additional confirmed cases of covid-19, a new daily record set just one week after the previous record was reported.

Gov. Asa Hutchinson said the jump was “expected” because some previous weeks with several days of low case counts have been followed by a single-day spike. The last four days have each seen fewer than 400 new cases reported.

“I don’t want to minimize it, but at the same time, you can’t overreact to one day’s data,” he said.

Of the new cases reported Friday, state Department of Health Secretary Jose Romero said about 12.9% were among college-aged people. He said that figure is down from recent reports.

Hutchinson said 13 more people have died of the virus, bringing the toll to 953. Hospitalizations remained the same as Thursday at 392, while the number of patients on a ventilator continued to fall, down three to 76, Romero said.

In addition to the confirmed cases, the state also reported 78 “probable” cases from positive antigen tests.

The state reports positive antigen tests as “probable” cases rather than confirmed cases but treats positive results from antigen tests the same as those from PCR tests for the purposes of contact tracing and case investigation.

The governor said 7,801 were completed in the previous 24 hours, as were 459 antigen tests.

Counties with the highest numbers of new cases included Pulaski with 105, Washington with 91, Craighead with 61, Benton with 52, Sebastian with 51, Jefferson with 47, Crawford with 35, Faulkner with 25 and Garland with 24.

The total number of confirmed coronavirus cases reported in Arkansas remained at 66,804 Thursday morning, according to a state website. The death toll remained at 940.

Check back to watch the live video.

[Video not showing up above? Click here to view » https://www.youtube.com/watch?v=-hDdiFr2BMA]