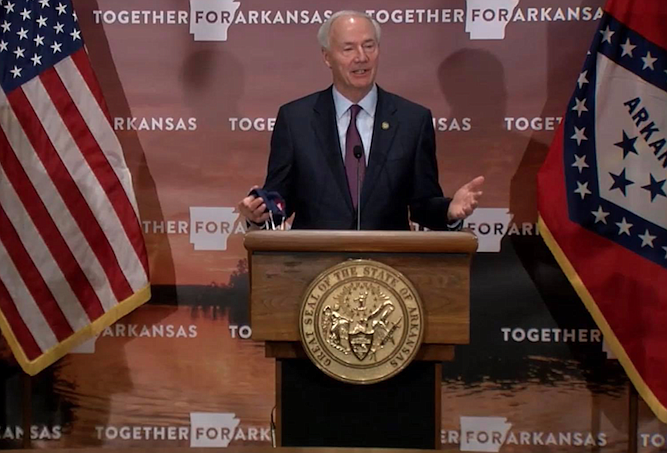 Arkansas Gov. Asa Hutchinson speaks to reporters at the state Capitol in Little Rock on Wednesday in this still of video provided by the governor's office.

The confirmed cases were the result of polymerase chain reaction, or PCR, tests, according to the governor. Hutchinson also said the state saw 114 positive antigen tests, which the state Health Department considers “probable” cases but treats the same as a PCR test-confirmed case for purposes of contact tracing and case investigation.

Taken together, the state reported 449 confirmed or probable cases.

The additional deaths brought the toll as a result of the coronavirus to 928.

Romero said 660 more Arkansans have recovered from the virus, bringing the total so far to 59,920.

Counties with the highest numbers of new cases included Washington with 42, Craighead with 21, Pulaski with 31, Benton with 24 and Jefferson with 23.

In the previous 24 hours the state received results from 5,208 PCR tests and 699 antigen tests.

Hutchinson also announced at the briefing a partnership between the Arkansas Department of Health and Baptist Health that will increase the state’s internal testing capacity in the next few weeks by about 20%.

The state is providing the machine to process the tests, but through the partnership the machine will be housed at and run by Baptist Health. Hutchinson said it will run 24 hours a day.

Priority will be given to specimens collected by the Health Department and then tests collected by Baptist Health will be run. Baptist Health CEO Troy Wells said this will prevent the hospital system from needing to send tests to out-of-state commercial labs for processing, decreasing wait times for results.

The total number of coronavirus cases reported in Arkansas remained at 66,021 Wednesday afternoon, according to a state website. The death toll remained at 917.

Check back to watch the live video.

[Video not showing up above? Click here to view » https://www.youtube.com/watch?v=Sx9s-Bq_MEA]