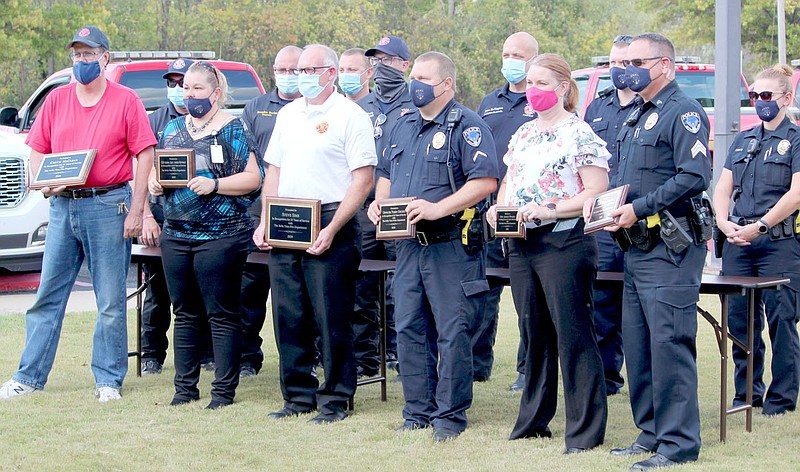 The church typically throws a banquet for the police and fire departments, but because of covid-19 concerns, a simpler approach was used this year, according to a news release issued by the church. In lieu of a cookout, emergency services employees were given $10 gift cards for Allen's grocery.

Senior Pastor Brent Summerhill said he regretted the church couldn't provide its usual banquet but he was glad to be able to recognize these workers.

"We're thankful for you; God bless you guys," he told the small crowd of emergency workers.

Fire Chief Steve Sims, who was recognized for his 25th year of service with the department, said he always looks forward to this church's banquet each year.

When he first started, the church did an ice cream social but it evolved into a full-on meal, he explained.

While the banquet was off the table, Sims said he still appreciated the recognition.

Mayor Peter Christie said he was grateful to see the church step up and he believes it's emblematic of Bella Vistans' appreciation of the city's emergency workers.

In addition to larger displays like this, he said the departments have also seen an increase in residents bringing lunches and snacks, he added.

"Nice to see it," Christie said.

Plaques were issued to the following emergency services workers to recognize years of service milestones.