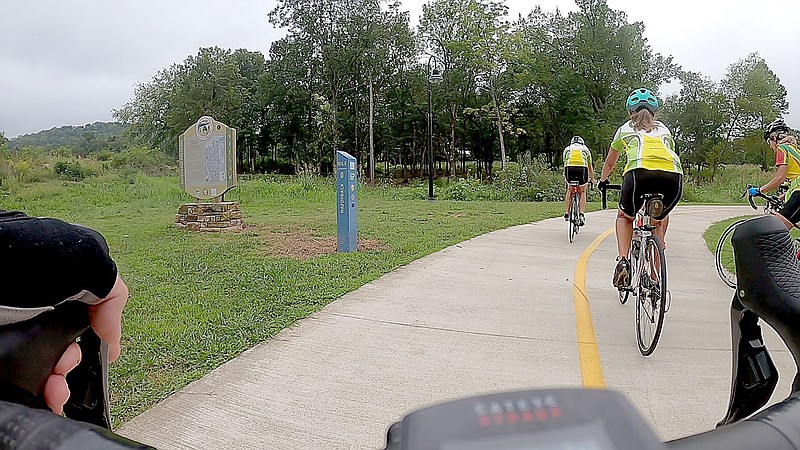 Photo submitted The club celebrates member's 70th birthdays with a 70 mile ride they call the TOF ride. Their most recent TOF ride followed the Razorback Greenway to Fayetteville and back, althoug most of their rides take place on roads.

Long before the trails came to Bella Vista, a group of cyclists was meeting regularly. Recently it celebrated 25 years, and not even covid-19 has stopped the cyclists. The Bella Vista Bicycle Club is made up of mostly retired men with at least two members who are over 80 but still riding. The club is open to women as well.

The club stopped collecting dues some time ago, Ride Captain Roger Arnold said. He's the one who sends out emails about the group's three weekly rides. There's a calendar made up every 30 days. Usually, about seven or eight show up for each ride.

Arnold believes biking without a mask is safe even during a pandemic. The club canceled social activities for the time being, but members still ride.

The Bike Club isn't about mountain bikes. Members ride road bikes and their routes are always paved. Some members also enjoy the mountain bike trails, but they need a different bicycle for that, he explained.

Arnold said they have about 30 set routes that are used by the club.

"There's a lot of work that goes into establishing a route," he said.

Each route was checked carefully by a member before it was added to the rotation. The club looks for wide shoulders that are cleared of gravel and litter. When they can't ride on a shoulder because of obstructions, members ride right on the white line that marks the edge of the roadway.

They often ride in Missouri where there are many paved roads with sparse traffic. People get used to seeing them along certain routes.

Most of their routes are about 30 to 40 miles long, so the active members ride about 100 to 120 miles a week. They usually ride on Mondays, Wednesdays and Fridays.

Parts of the Razorback Greenway, the paved trail between Fayetteville and Bella Vista, are used at times. Last month, the club celebrated a member's 70th birthday by riding 70 miles, mostly on the Greenway. It's a tradition leftover from the club's founders who called it the TOF ride, Arnold said. The cyclists liked to call themselves "tough old farts," but he prefers "tough old fellas."

Arnold believes riding in a group is safer than an individual riding alone. The leader of the pack and the last cyclists have lights to warn automobiles to watch for bicycles, and usually they do. Dump trucks are a problem, he said, they often blare their horns and try to scare the riders. Occasionally a car or pickup truck will do the same and the bike club riders will call the sheriff and report the driver. In the 12 years that Arnold has been involved, no one has been hurt on a club ride.

If necessary, the club divides into smaller groups, usually under 10 people, and there are designated meet-up points so the entire group can meet together in the middle of the ride.

"We're a 'no-drop' group," Arnold said. That means if someone can't keep up, another rider will stay with him. If there's a mechanical problem, someone will stop and help. But riders who can't keep up don't usually come back, he said. They realize the group is serious about its riding.

Road bikes, like mountain bikes, are not inexpensive. Most of the club members ride bicycles that cost up to about $2,000. They usually find a bike they like and maintain it for years. It can be hard, Arnold said, to find the perfect fit in a bicycle so you don't want to switch it out.

Since weight is an issue on long bike rides, members of the club carry very little gear. They might have one small bag attached to their seat with a spare inner tube and a few very basic tools. Most bikes have a bracket for a water bottle as well. The bike itself weighs only 16 or 17 pounds. Members must wear a helmet on club rides.

Right now, Arnold said there aren't any plans to return to regular meetings with dues and social events. Once the need for social distancing is over, a member may step up to organize meetings. Or, the group may spend what's left of its treasury for a bench along the Greenway dedicated to the TOFs of the Bella Vista Bike Club. 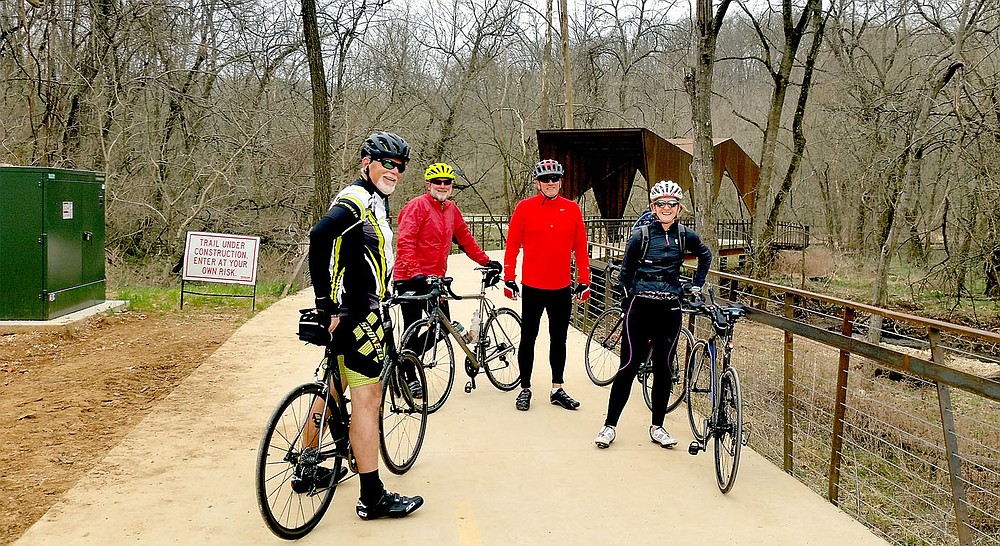 Photo Submitted Members of the Bella Vista Bicycle Club stop for a photo on a cool weather ride last winter.