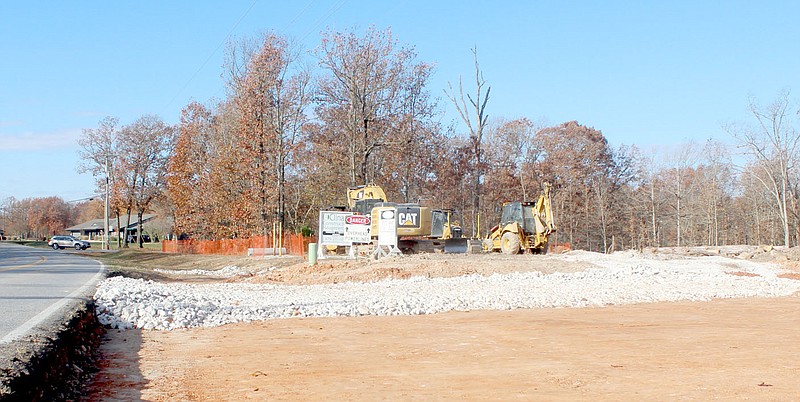 Keith Bryant/The Weekly Vista The earthwork for a rebuilt Fire Station 3 is underway. Fire Chief Steve Sims said he expects to open the station next year and hopes to get it finished in time for a July opening.

Dirt work has started for a replacement Fire Station 3 on Glasgow Road, expected to be finished next year.

Fire Chief Steve Sims said, with cooperative weather, he hopes to open the station in July of 2021 -- 35 years to the day after the original station was built.

This project is one of three -- the others being a fire training facility and a new public safety facility to contain the police department, dispatch center and court facility -- voters approved during the March primary election, to be supported by municipal bonds paid with an additional 1% city sales tax.

The Bella Vista Planning Commission approved a large-scale development and related waiver for the site in October.

Clearing the lot -- a $134,000 project -- started earlier this month, Sims explained, and a formal groundbreaking with a small group of officials is expected soon.

Sims explained the construction plans are still in the preliminary stages, but a final draft of buildable plans is expected soon. Once those plans are finished, the project can go to bid, he said.

All this preliminary work is the toughest part of the project, at least on the city's side, he said, because officials need to work very carefully to ensure they're getting everything the station needs without spending frivolously. It's important that officials don't spend too much of the public's money, he said.

"That all takes some time," Sims said.

The finished 7,500-square-foot structure will have three vehicle bays and six beds, with separate driveways for entry and exit.

The structure will also have a full kitchen, workout room, lounge, showers and a proper front entryway for non-department personnel.

This new station will be stick-built, with a wooden exterior on metal studs to better match the neighborhood it's in, Sims explained.

The current station, situated a short distance east of the new construction site, has two bays and two beds packed inside.

Sims said that, while the current station does not have space for adequate personnel to keep an ambulance and fire truck in the Highlands, the new station will be adequate for the area's needs for some time.

Keith Bryant/The Weekly Vista Heavy equipment stands by at the worksite for a rebuilt Fire Station 3 on Glasgow Road.