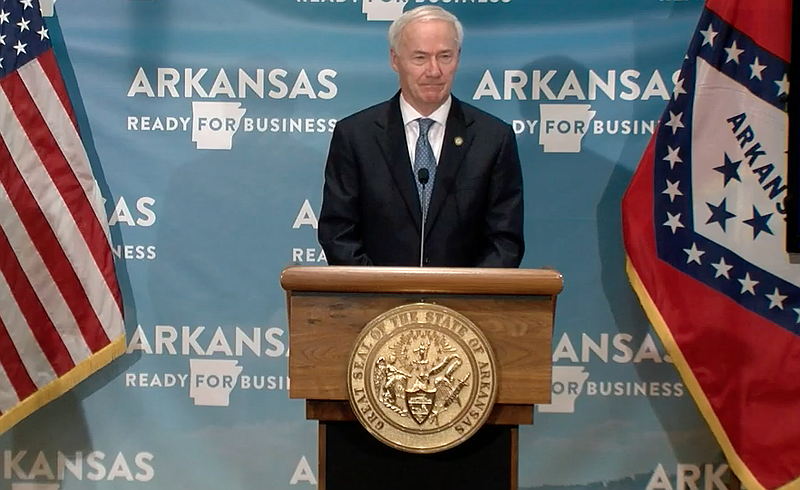 Arkansas Gov. Asa Hutchinson speaks to reporters at the Capitol in Little Rock on Wednesday in this still of video provided by the governor's office.

Three more Arkansans died of the virus, bringing the toll to 240.

Department of Health Secretary Dr. Nate Smith said at least 43 of the new cases were from correctional facilities but added the number is likely higher.

According to Smith, this is because 168 new cases were reported from Hot Spring County, where the Ouachita River Unit, a state prison is located. The health secretary said he believes most or all of those are tied to the prison, though that had not been confirmed at the time of the news conference.

The total number of active cases Wednesday reached 5,567. Of the 267 hospitalized, 58 are on ventilators, Smith said, and so far 11,568 have recovered from the virus.

Hutchinson said the rate of increase in new cases seems to be slowing in Northwest Arkansas, a positive sign, but new areas of “challenge” are also surfacing, including Sebastian County, which saw 40 new cases Wednesday.

Other counties with high numbers of new cases include Faulkner County with 29, Columbia County with 26 and Yell County, which also had 26.

To deal with the rapidly increasing number of active cases, Hutchinson said the state will be looking to contract 350 additional contact tracers on top of the 350 set to be contracted by mid-July, for a total of 700.

The Department of Health also has more than 200 contact tracers in-house, Hutchinson said.

The governor also announced the state will seek to test 180,000 Arkansans in July or about 6% of the state’s population. This month’s goal, 120,000, has already been exceeded.

The total number of coronavirus cases reported in Arkansas remained at 16,678 Wednesday morning, according to a state website. The death toll remained at 237.

[Video not showing up above? Click here to view » https://www.youtube.com/watch?v=iY9r-D7DHg8]