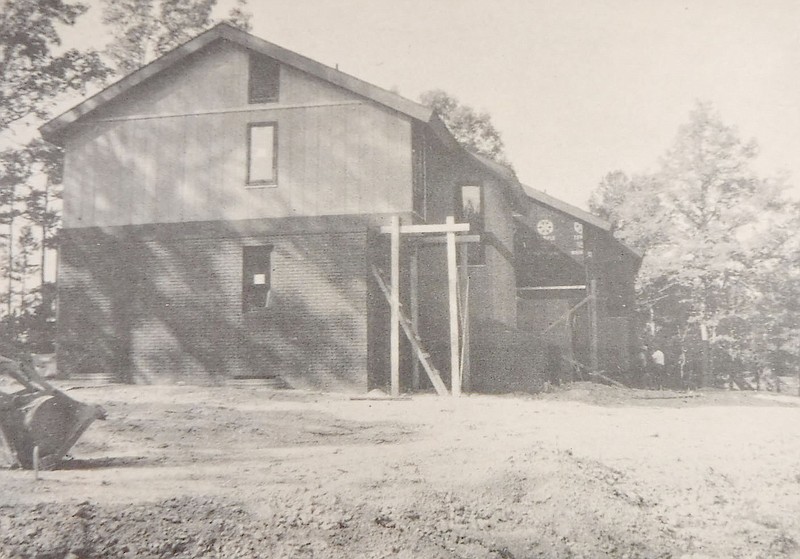 Originally printed in the July 1970 Village Vista The first townhouse building, located on Cooper Lane, was nearly complete when this photo was taken. This structure contained four units and three others, containing a total of 14 units, were also under construction at the time.

The Bella Vista Townhouse Association, which is 50 years old this year, oversees groundskeeping and maintenance for 1,048 units, primarily in and around the city's central portion.

The first townhouses started opening in 1970 and 1971, with 14 units expected to open in 1970 and another 46 planned for 1971 according to a July 1970 Village Vista article that argued townhomes, while antithetical to a typical homeowner's priorities, could be "the ultimate in retirement living."

In the Oct. 4, 1977, Weekly Vista, an article indicated the third set of townhouses, Basildon Courts, were starting construction. This 52-unit development brought the total number of townhouses to 361 and builders were eyeing what would later become Brompton Courts for further development.

Currently, townhouse owners pay an annual assessment of $960 in addition to POA assessments, and these funds go to grounds and infrastructure maintenance for the association's limited common property.

"You're paying your assessment ... you're paying that basically to not have to worry about grounds maintenance around your house," he said. "It sort of takes the exterior maintenance ... out of that."

David Whittlesey, who has served as general manager since 2007, said the association has 15 total employees charged with maintaining 350 acres of property across 17 courts with services including mowing, trimming, weed eating, spraying rock yards, trimming limbs, removing dangerous dead trees and cleaning leaves in the fall.

The infrastructure side is less likely to be thought about, but the association maintains all the sidewalks, handrails, retaining walls, drainage infrastructure and court lights, in addition to paying the electric bills on those lights and covering taxes and insurance on limited common property, he explained.

Grounds work is primarily handled in-house, though infrastructure work may be contracted out if it requires additional personnel or expertise the association doesn't have.

With aging units, there has been more infrastructure work needed over the past decade than ever before, Whittlesey said.

Having a maintenance team means residents can focus more on work or recreation without having to worry about yard work and other things, he said.

The homes are relatively small and have limited parking, meaning they aren't ideal for large families with a lot of vehicles. There are also very few freestanding units, meaning residents are likely to have neighbors very close, he added.

But for the right kind of residents, Bella Vista's townhomes offer convenient living, he said.

"We've got a good staff and the lion's share of the folks here in Bella Vista and the Townhouse area are good people," Whittlesey said.