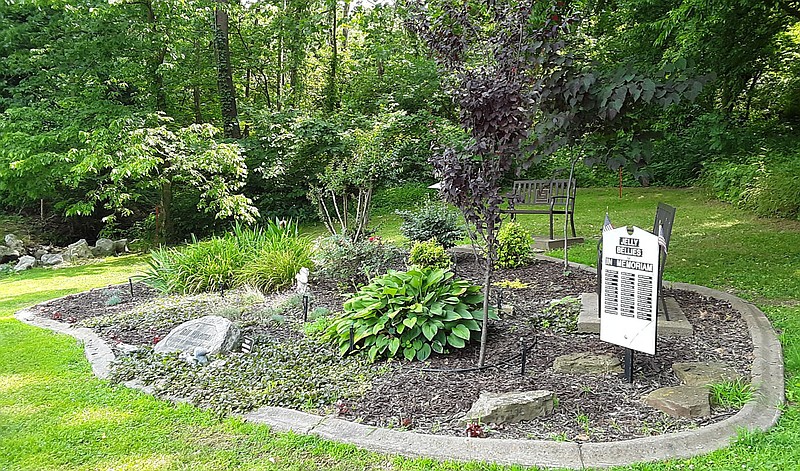 Photo by Xyta Lucas The Jelly Bellies Memorial Garden is located on the Kingswood Golf Course to the left of the second hole tee boxes.

Both men's and women's golf groups were formed in Bella Vista even before John Cooper Sr. opened his first golf course here, the Country Club Course, in 1967.

Gilbert Fite wrote in his book on the history of Bella Vista, From Vision to Reality, "Beginning in March 1967, some four months before the first nine holes officially opened, both men's and women's golf associations were organized ... By July, the Women's Golf Association started weekly play, and the Men's Association played once a month."

So, while the Jelly Bellies golf group is certainly not the first men's golf group formed in Bella Vista Village, it has reached a big milestone -- the group is 25 years old this summer. The founders were Mike Bauer, Tom Brown and Earl Hawkins. The story of their name comes from the fact that at some point, Tom Brown went to the POA and signed up for league play, giving them a name which the POA office interpreted as "Jelly Bellies." Though that was not the "exact" name given, Tom and Mike liked it, and, as they say, the rest is history.

Ed Wall was one of the charter members and set up the first computer roster in the late 1990s for the group's pairings. He also started the first email group in 2000. Ed talked his former co-worker from Colorado Springs, Jim Lucas, into joining the group shortly after it was formed. Other charter members included Ray Cox, Joe Michaels, Lee Lange, Andy Nissan, Bob Shepard and Dick Miller. More men joined the group within the next few years and remained members for many years.

By 2004, the group had 70 members, and although that number has dropped some in the last several years, the group is still going strong, with Fridays being the designated day of play. Following Mike Bauer's death in 2004, Earl Hawkins took over the group, but he and his wife moved back to Iowa in 2013. Current leader of the group is Lee Yates. The members compete for prizes each week and may contribute to the hole-in-one pot if they wish. If no one in the group gets a hole-in-one, the money is held over for the next year so, some years, that pot has been quite large.

For close to 15 years, the group held a "Ladies Night" to honor all the spouses of the Jelly Bellies and thank them for their support over the years. The dinners, which eventually became an annual occurrence, ended in 2016. The ladies were always treated to dinner at one of the clubs in Bella Vista, often followed by special entertainment and dancing to a local musical group. A prize was given at that dinner to the golfer who improved his handicap the most over the preceding year.

The Jelly Bellies Memorial Garden was built on the Kingswood Golf Course near the second hole tee box in 1999. A special plaque at the edge of that garden, initially created by Jim Lucas in 2003, lists the names of the members who have died. It is sad to note that there are now 33 names on that plaque, the first name being Tom Brown, who died in 2001. Several benches have been placed and trees planted at various Bella Vista courses to honor past members, including four benches overlooking the 18th green at the Dogwood Golf Course which honor Ed Hogetvedt, Herb Keller, Jim Roberts and Dick Schweitzer. There are also two benches at the Kingswood Memorial Garden, one to honor Mike Bauer and one to honor Earl Hawkins, who died in 2018.

What Gil Fite wrote in his book certainly has applied to the Jelly Bellies all these years, "Golf was the activity that brought many people together in Bella Vista ... Many people moved to Bella Vista so they could play as much golf as they wanted to, and they took advantage of that opportunity." 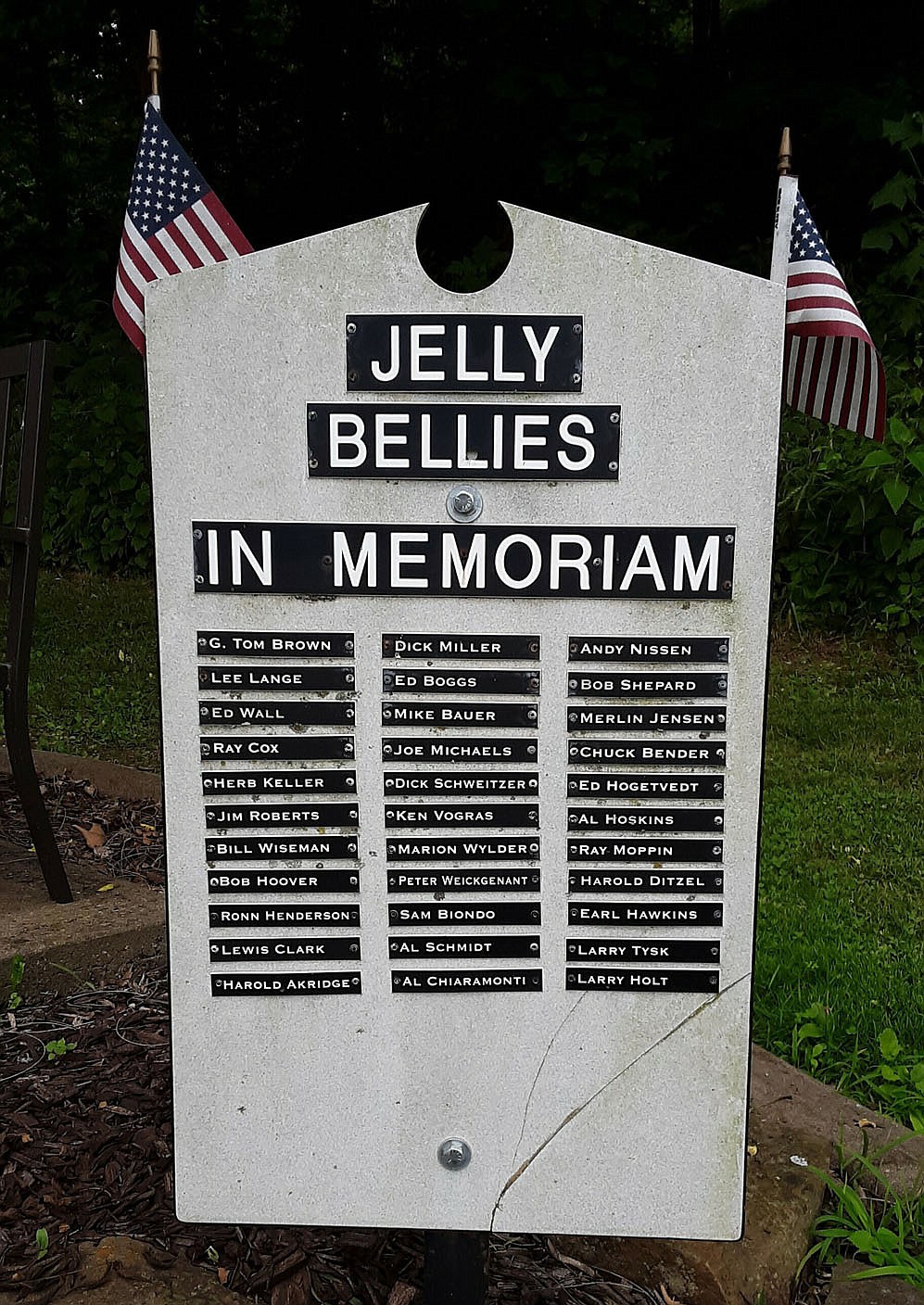 Photo by Xyta Lucas The memorial plaque, listing the names of all the Jelly Bellies golfers who have died, suffered mower damage shortly after being erected near the garden, so it was repaired and moved to its present location inside the garden perimeter for protection. 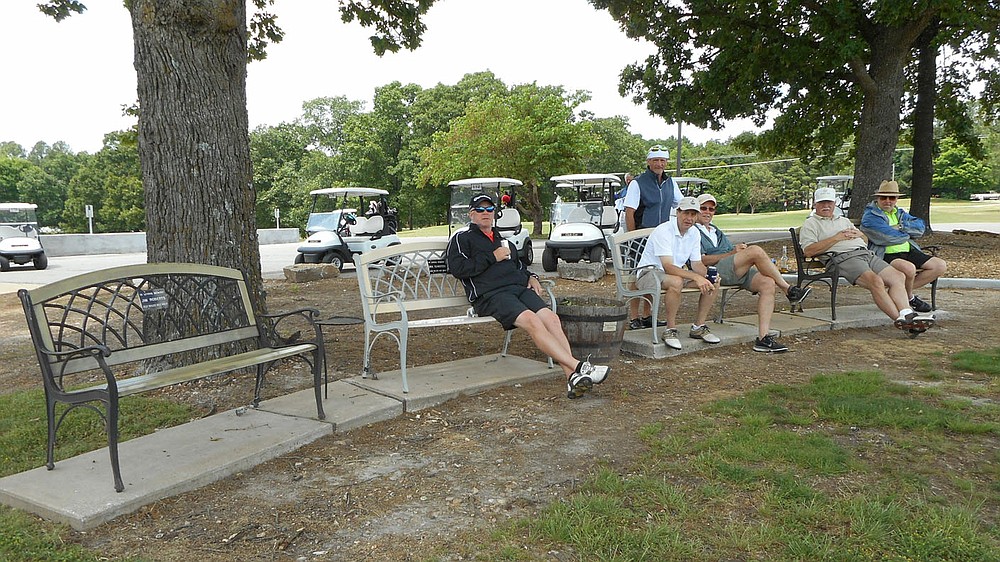 Weekly Vista photo June 1, 2016 Golfers in 2016 enjoy relaxing on the four benches overlooking the 18th hole at the Dogwood Golf Course. These benches were installed in 2009 to honor former members of the Jelly Bellies.