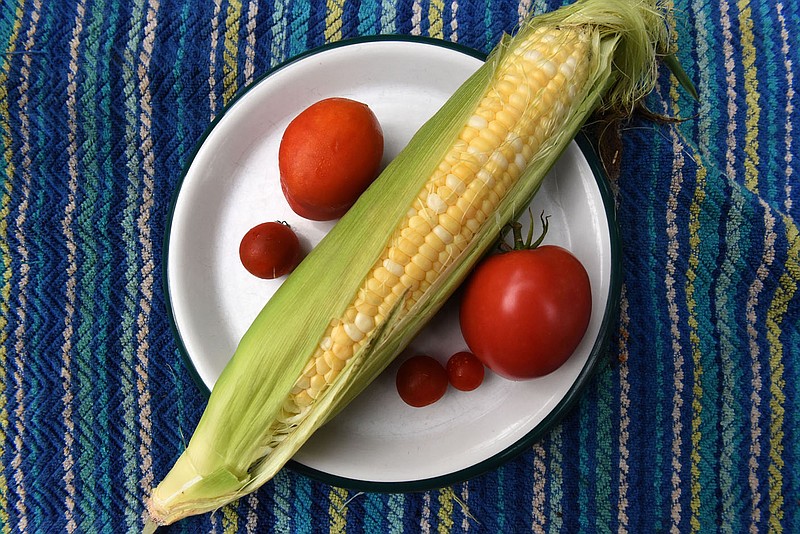 It's easy to live off the land during summer, as long as that land has a grocery store.

Those of us born with thumbs of plaid, not green, offer many thanks to the produce aisles, farmers markets and vegetable stands at this hot time of year. It's not even August and my victory garden has already raised the white flag. I'll be lucky to get one more tomato. I may have picked the last cucumber.

My little veggie plot, about the size of a parking space, started looking like a Charlie Brown Christmas tree two weeks ago. I noticed two of the four tomato plants were almost devoid of leaves. One little green tomato had a bite out of it.

Dang deer, I figured. They're munching on my plants. Closer inspection revealed both plants were infested with those ultra-gross great big green worms that eat the leaves and gnaw on the fruit.

I'll wager they'd make great fish bait if you could stand to touch one. Not much grosses me out, but they're so grosser than gross I wouldn't touch one with a six-foot pole. The two plants were so far gone, I ripped them out of the ground and tossed them and those ugly worms into the woods.

There are two plants left. One has three tomatoes the size of billiard balls that are nearly ripe for picking. That'll bring to four my total tomato harvest for the summer.

Yet my vegetable bin overfloweth. Two pals in our little Tour De Madison County bicycle group have such green thumbs they almost drip with chlorophyll. They grow more lettuce, green beans, tomatoes and -- get this -- asparagus than a city block of families could eat.

It's like I'm doing them a favor taking some of the bounty off their hands. Most times their generosity includes a half dozen fresh farm eggs. They've got chickens, too, that lay enough each day to fix a couple of three-egg omelets.

When a miracle happens and I catch some fish, I try to return the favor and bring them an occasional mess of filets when we meet to ride our bikes. Each of us thinks we're getting the better end of the deal.

It's easy to repay their generosity in spring during prime fishing time. When the dog days howl, it's harder to get those fish to bite.

The true treasure of summertime eating has got to be sweet corn. You know it's summer when the big signs that say "Sweet Corn" appear along the Ozarks byways. Everybody gets their ears on when it's time to invest in a bag of peaches and cream sweet corn. Ears are piled up in the beds of pickups or at roadside stands under pop-up awnings.

Everyone likes a bargain, but sometimes I think these sweet-corn folks don't charge enough. Last time I bought some, the price on the hand-painted sign said $6 a dozen. When I got back home to the shack-ri-la and spilled the corn out of my bag, there were 14 ears, not 12.

I can't remember a time I've bought corn from the back of a pickup and didn't get at least a baker's dozen.

That's the beauty of sweet corn. It's summertime tasty, and you always get more than you bargained for.

Flip Putthoff can be reached at [email protected] Opinions expressed are those of the author.