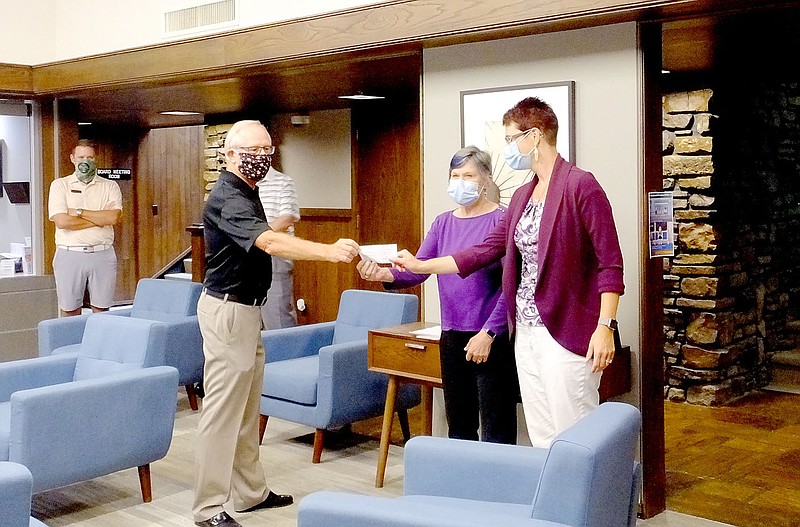 Lynn Atkins/The Weekly Vista Bella Vista Community Television, represented by J.B. Portillo and Andrea Cadilu, were added to the list of nonprofits benefiting from the recent professional golf tournament this year. The studio and office of BVCTV is the midst of a renovation, they reported. Charlie Teal of the Bella Vista Foundation presented the check.

In January, sponsors were being lined up, contracts were being signed and preparations were well underway for the June event, Charlie Teal of the Bella Vista Foundation told a small group gathered in the Country Club on Wednesday, July 22. But within a few weeks, basketball was suspended, baseball canceled spring training and Teal was considering refunding the money already donated for the Cooper Communities NWA Charity Classic Tournament.

Representatives of five local charities were gathered to receive a total of $39,000 in grants raised this year at the tournament. Last year, the total was $34,500; and over its four-year history, the tournament has raised $121,000. But first, they listened to Teal's story about this unique year.

In March, no one was sure the golf tournament was going to happen, he remembered, but in April they heard from the organizers of the APT (All-Pro Tournament). Although the early part of the APT tour was canceled, they planned to be continuing their schedule in June and Bella Vista was still on the list.

"They then added a kicker," Teal said, "would the POA consider adding a WAPT ladies event as part of our tournament week?"

Golf Operations director Darryl Muldoon looked at the logistics and got to work. Adding the WAPT meant adding a golf course to the tournament. The details were decided in a phone meeting in late April. Planning resumed in early May for an expanded tournament in June.

Besides Muldoon and the maintenance supervisors of the two courses that would be utilized, Teal recognized volunteers who helped put the tournament together. Ruth Hatcher recruited and assigned "an army of volunteers." Gary Mertz found 36 homeowners who could house 60 of the young golfers.

Golf operations had to change the format of the tournament from morning and afternoon shotgun starts to tee times because of the covid-19 restrictions and then had to find enough golf carts for the group.

There were fewer sponsors than the year before, Teal said, but they contributed more money.

The Pro-Am tournament was full, with 42 teams, and those teams spent over $15oo on mulligans in order to have a second chance at a stroke. The mulligan number means that either the amateur players were very generous or they were very competitive, Teal said.

The Pro-Am party and private auction had to be moved from the Country Club to Lakepoint because of space restrictions due to covid-19, he said. In fact, the volunteers organizing that portion of the event had no idea if it would even take place until the week before when the covid-19 restrictions went from phase one to phase two, but they were ready. The auction raised $2,000 more in 2020 than in 2019 in spite of the cancellation of the popular wine pull.

Representatives from the charities that benefit from the event were grateful.

Bill Puskas of the Courtesy Van explained that his group had to suspend services due to the pandemic. Not only are their passengers at high risk for the disease, so are many of the drivers. But when they stopped their usual service, many of their usual donations also stopped but not all of their expenses. There are still bills for insurance and phone service, he said, and the funds from the tournament will help.

Kurt Stoops of the Bella Vista Animal Shelter said that his board had to suspend a planned capital drive to build a new shelter building because of the pandemic. The funds from the golf tournament will go into the capital account.

The other charities were the Bella Vista Television station, the Boys and Girls Club and the Bella Vista Rotary Club, which will use a portion of its grant to complete a pledge made to the Library. 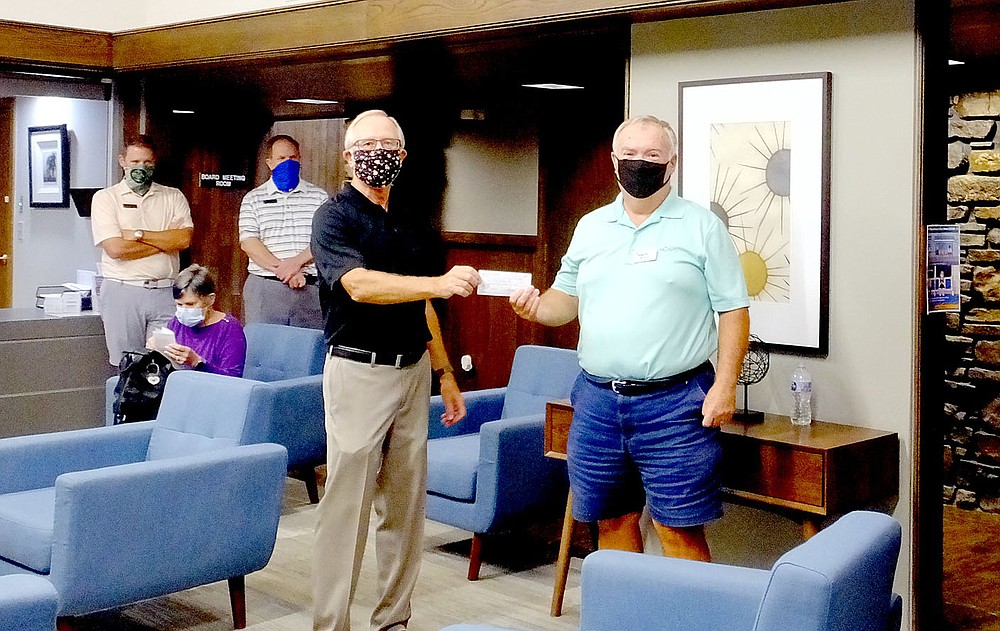 Lynn Atkins/The Weekly Vista Bill Puskas of the Courtesy Van said that even though the service has been suspended because of the pandemic, not all the expenses were suspended. He was grateful for the donated funds raised by the APT/WAPT and presented by Charlie Teal of the Bella Vista Foundation. 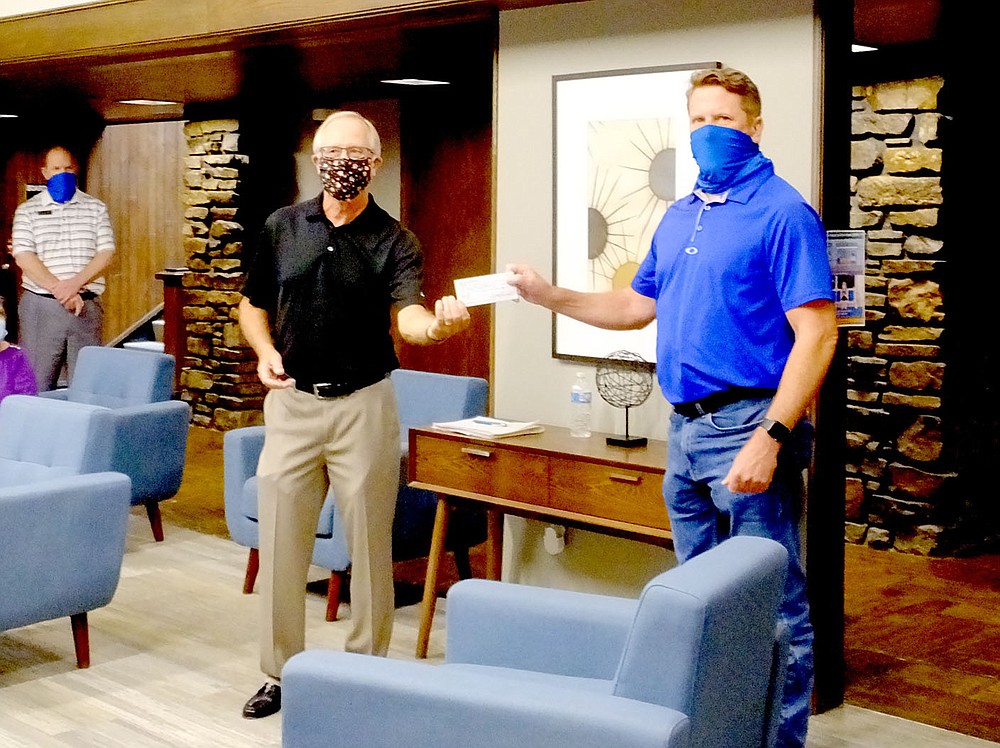 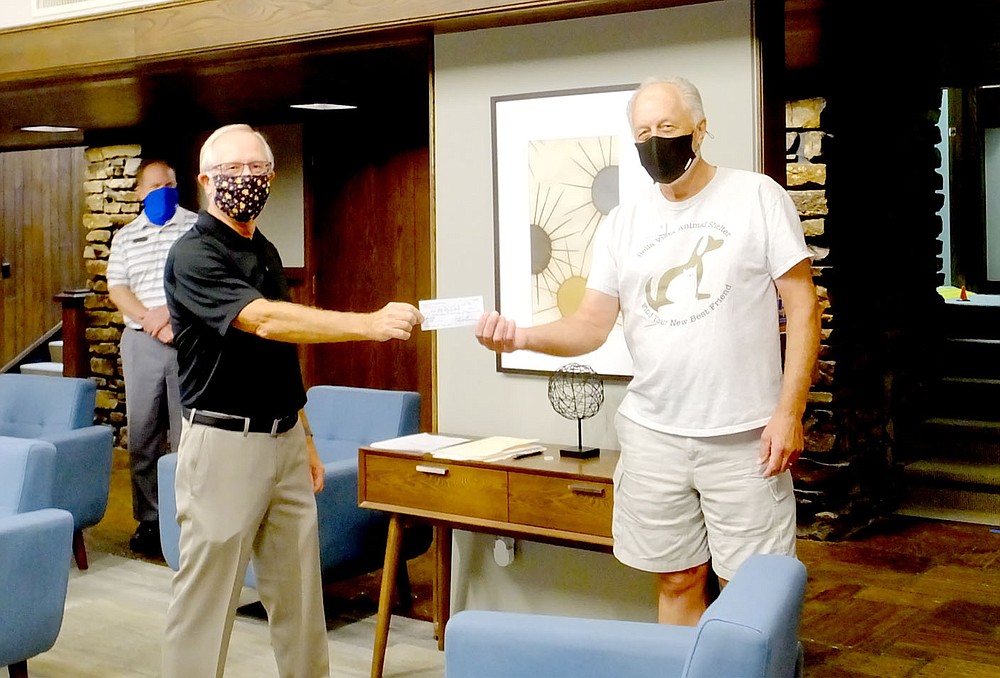 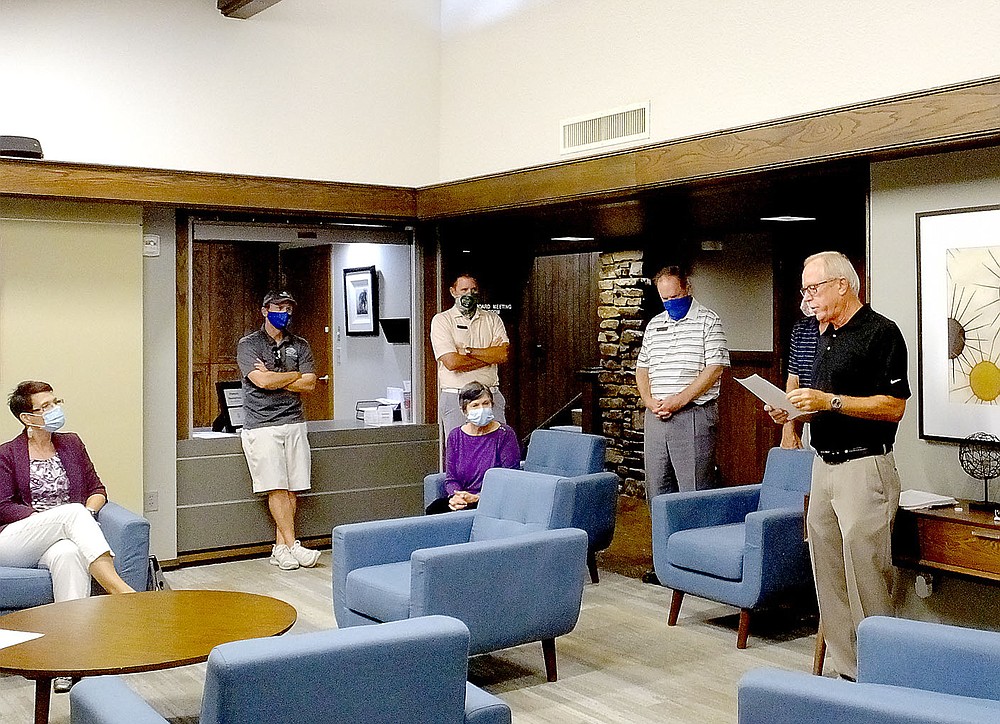