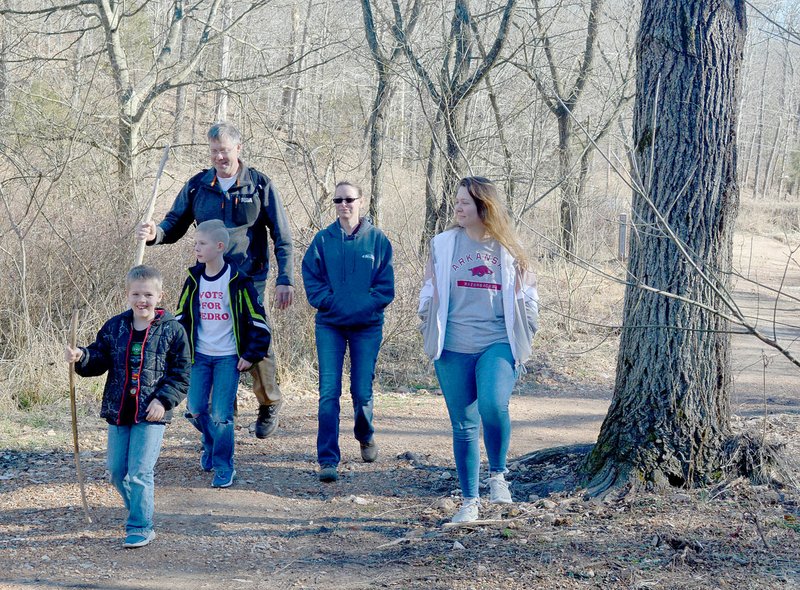 Bella Vistans are getting their first taste of the Little Sugar Creek trails now that the first chunk is officially open.

NWA Trailblazers executive director Erin Rushing said the remainder of the system is mostly built -- with 45 miles of trail finished and another five to six miles to go -- and is largely waiting on the completion of three remaining tunnels, which are expected to take roughly one month each.

"The tunnels are really the last piece of the puzzle," he said.

The very last step will be a bridge spanning Little Sugar Creek to connect the new trail system with the Back 40.

The trail system may continue to open in pieces, he added.

Last weekend, Bella Vistans were out exploring these newly-opened trails.

Bill Ryan, who was out for a ride, said he moved to Bella Vista 16 years ago and retired last year.

"It's funny to see something like this get added," he said.

Ryan said he previously rode road bikes and thought mountain biking would be too dangerous but had to give it a try once the trail ran right by his house and that settled it.

"This is my favorite amenity of all of them," he said. "We live in a great habitat ... this is an awesome way to see it."

Riding gives him a different look at his town, he said, and a chance to see the beautiful nature inside the city.

It's also quickly become his favorite workout, he said, in part because he can gear up, head out the front door and get started right away rather than hauling the bike somewhere to ride or heading to a gym.

A typical ride is 30 minutes to an hour, he said, and it's not uncommon for him to end up at Gusano's or JJ's where he'll get a meal and bribe his wife with lunch in exchange for a ride back up the hill.

"I think the trails are going to be pretty good for the economy," he added.

Ryan said he sees people of all ages riding, hiking and walking these trails.

Bella Vista resident and former POA board of directors member John Nuttall said that this system is very different from the Back 40 trails because it was built with more machinery, which creates a wider -- and easier -- trail.

"There's just room to do things ... it's a lot easier to walk because there's more space," he explained.

One trail, Tweety Bird, sits near the intersection of Chelsea Road and Prescott Road, and it provides a wide, flat, easy walk to a rock beach on Lake Windsor, he said. It's a great place for kids to play or for a family to have a picnic, he added.

"Anyone who can walk could get there," he said.

Another stretch takes walkers and riders near Dairy Queen, Papa Mikes and other places to eat and features cliffs, caves and other gorgeous scenery, he said.

"That is an exquisite walk," Nuttall said."You're right in the middle of town and you wouldn't know there's a house around you."

Nuttall said one of his favorite things about these new trails is that they go places -- you can take a trail and stop for lunch or reach Lake Windsor's pontoon park area, stop at the water tower or find other landmarks. This also means that, even without a trailhead, there are plenty of public spaces one can park and access trails, he said.

"It's neat that they go places," he said. "What else can you ask for?"