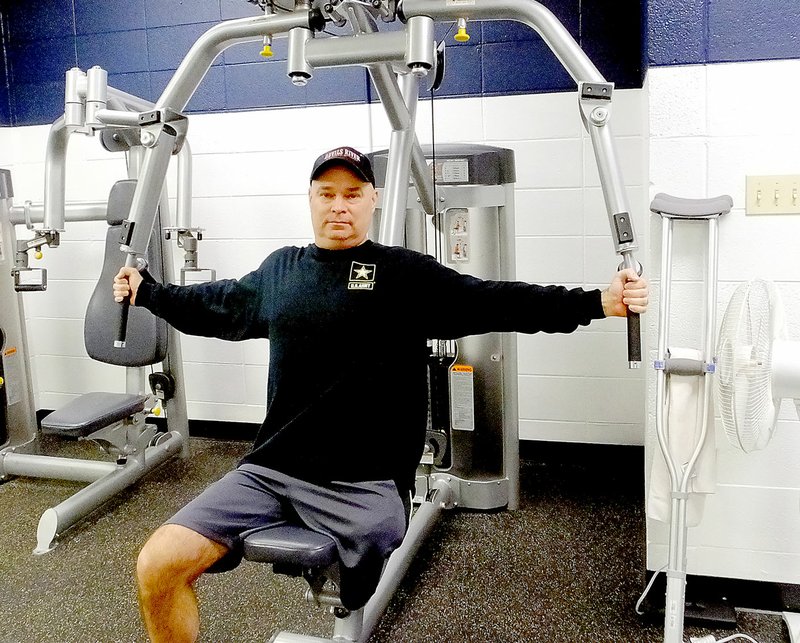 Lynn Atkins/The Weekly Vista Jason Long works out at Riordan Hall every day to prepare for the Veterans Wheelchair Olympics.

Although he's never sure he wants to continue, Jason Long finds himself going back to the National Veterans Wheelchair Games each year. He has a championship to defend. For three years, he's been the champion in his weight class at men's bench press.

But he also holds medals in basketball, boccie ball and several track events.

Boccie ball was a surprise, he said. He doesn't have a place to play in town, so he's not experienced. In fact, he's not completely sure of the rules. When he earned his first boccie ball medal, he had actually left the match early to play with his basketball team. They had to hunt him down to give him the medal.

He's preparing for his least favorite part of the games, finding sponsors to help him make the trip to Portland, Ore., for this year's event. Last year, an individual who asked to remain anonymous helped him, and the year before a group from his church went out and raised funds for him.

Lisa Elliot, who checks Long in for his workouts at Riordan Hall, is helping.

"She's my press agent," Long jokes. When Elliot is working at Riordan, she can answer questions about the project. If she's not there, she will respond to messages left at the front counter.

Long workouts at Riordan almost every day. He's never had a coach for the games, but he gets advice from the other people who work out there. He also takes part in a wheelchair basketball league, and it was his basketball coach who suggested he try the games.

Long was in the Army infantry for eight years. The Army was going to be his career, but a minor injury ended that. At Fort Irwin, Calif., he was being treated for a tear in his MCL, the ligament behind the knee, but a doctor's mistake caused him to lose his leg. He's now on disability.

It's the challenge that keeps him going back to the Wheelchair Games, he said. As long as he can get sponsors to help with the expense, he'll continue to defend his championships.