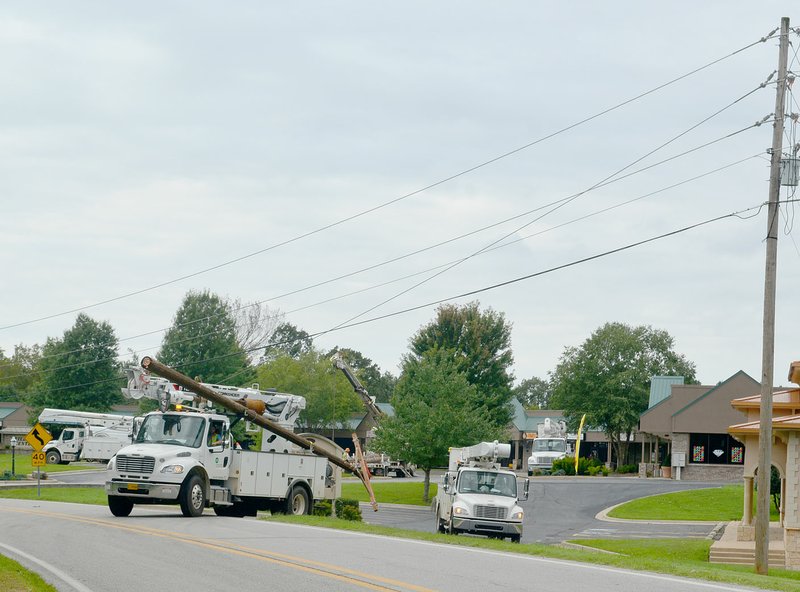 Bella Vista communications manager Cassi Lapp said 283 streets were listed as needing to be cleared of downed trees or other debris, with some calls coming in Friday, Aug. 30, though all streets were open at that time.

No injuries were reported, she said.

The city did not track the number of houses damaged, she said, but there was some minor damage to city equipment, including a broken backhoe window that happened during cleanup.

An ambulance was also struck by a highway sign that blew into the road while transporting a patient, she said, but nobody was hurt and the vehicle simply needs a new hood.

The city is also working on a plan to help residents with debris disposal, but because of the scale of this incident that will take some time, she said.

"We are appreciative of the residents' patience through this cleanup, as some people waited much longer than others for their road to be cleared and went for days without power," Lapp said. "It was really impressive to see the community come together and assist their neighbors and those in need."

The first load, approximately 2,000 pounds, was gone within an hour and a half after the department started giving it out.

The effort was started after a short discussion the night before because of ongoing power outages and extensive damage, he said, which left people without perishables.

"It's mostly people who had food in the refrigerator that went bad in the power outage," he said.

There were also some people who still had no electricity, he said, and some who were simply hungry.

Crupper said he picked up the food and other firefighters and city employees helped load distribute it from the fire station.

"It was a just something we threw together," he said. "It worked out, got a lot of food out to people."

A large number of power lines were downed by falling trees, she said.

"As they fell, they fell into power lines and they fell over roads. And they took down so much of the power line system," she said. "That puts a lot of power line on the ground. And we just have to start to rebuild."

And in addition to damaged lines, a total of 105 power poles were broken. An estimate for the monetary value of this damage is not currently available, she said.

A substation in Bella Vista lost the ability to transmit, she noted, and that had to be restored as a first step. From there, she said, the company works to repair lines on major thoroughfares, then neighborhoods, then individual homes that are still experiencing problems.

In addition to sending out its own workers, the company has hired help with more than 50 people from other electric companies as well as contractors.

"We've got kind of all hands on deck," Plagge said.

The company has also reached out to emergency management seeking a declaration of emergency, which could lead to FEMA assistance.

One important thing for residents to note is that, in some cases, power meters' bases have been ripped out by the storm.

The meter base is the property owner's responsibility, she said, and Carroll Electric cannot install a new meter if it is damaged.

"They've been very kind," she said.