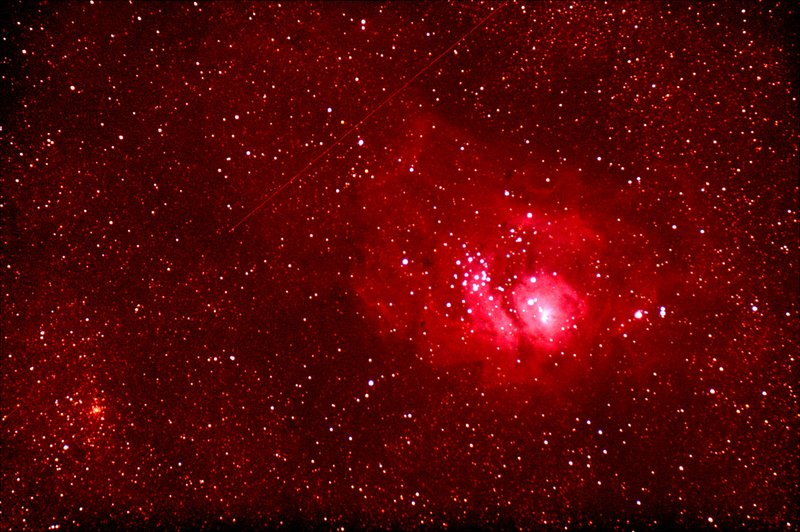 David Cater/Star-Gazing The Lagoon Nebula is a a cloud of hydrogen gas, many light years across and hundreds of light years away, and it is caused to shine by the stars scattered within the cloud. It is a nice shade of red, always the indicator of fluorescing hydrogen.

September might be called a transition month for amateur astronomers. What we could see in the night sky for summer is beginning to move over the western horizon and by the end of September, familiar sights such as Jupiter and Saturn and the Milky Way will certainly begin to move out of sight. But for a while yet...

Jupiter and Saturn continue to dominate the planets that can be seen. Uranus and Neptune can be seen, especially toward the end of the month, but one really needs a 10-inch scope, or, preferably, even a 16-inch scope, to see them bright enough to appreciate their blue and green colors. Even then, they will be tiny.

The Milky Way will be directly overhead in September so this month should be very good to see it on dark nights. To see it best, lie on your back with padding of some sort under you, use any binoculars you have, and gaze from overhead to the southern horizon (Don't forget your bug repellent!). The star count will noticeably increase as you move south because that is the direction of the center of our galaxy and the stars are increasingly numerous as one looks toward the center. Scorpio's tail will be down there and Sagittarious the Archer.

I have always had a bit of difficulty imagining Sagittarious as an archer; to me, and many others, it looks more like a teapot with steam coming out of the spout. The 'steam' in this case is clouds of thousands of stars that appear as if they are streaming out of the teapot. If you have some good binoculars, you might notice a little puff or cloud in the 'steam.' This is not easy to see because you need a dark night and you need to know just where to look. This little cloud is a cloud of hydrogen gas, many light years across and hundreds of light years away, and it is caused to shine by the stars scattered within the cloud. The little cloud has a name -- the Lagoon Nebula. In photographs, it is a nice shade of red, always the indicator of fluorescing hydrogen. I have included an image of this nebula I made last year so you can appreciate the beautiful color.

I had a blast hosting a night under the stars at Kayak Park. This was sponsored by our local Siloam Springs Library. Unfortunately, it rained and clouded up the day of the outing but cleared about 7 p.m. I think the weather discouraged many from coming to the event. For those who did come, we could see Jupiter and Saturn very well indeed because the city of Siloam Springs turned off the lights in the parking lot and we had very dark skies. Perhaps an outing like this can be done again. I would certainly be enthusiastic if this could be done again!

Soon, because of the Earth's movement along its orbit, we will start seeing autumn constellations. If you stayed up late enough, you could see Orion the Hunter, a winter constellation, toward the end of September. The nearest large galaxy to us, the gigantic M31, will be visible by the end of September and this will be the harbinger of autumn and winter.

Something new each month; you must get out and look!

-- Dr. David Cater is a former faculty member of JBU. Email him at starbug352@yahoo.com. The opinions expressed are those of the author.

Print Headline: Milky Way a sight to see in September