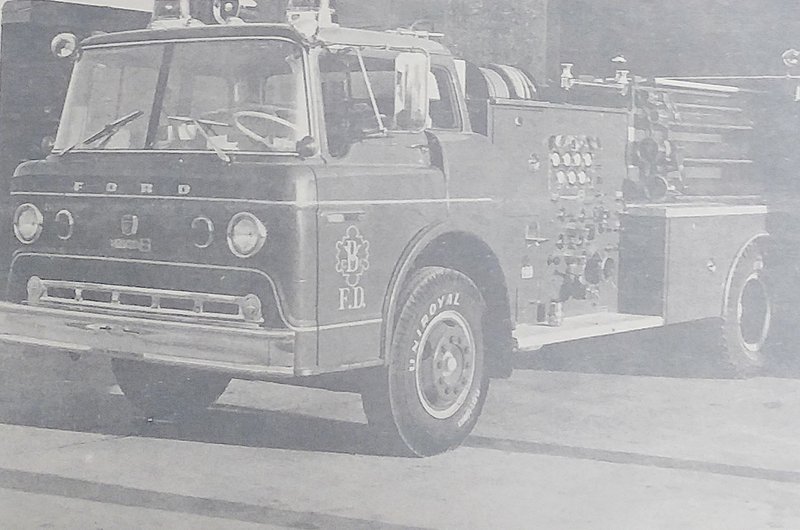 Originally printed in the April 1970 Village Vista is a photo of the very first Bella Vista fire truck, which was ready to go when the department opened in 1970.

The Bella Vista Fire Department is in its 50th year of service and, over the past few decades, it's grown from a handful of volunteers to a paid department with 61 full-time firefighters.

Fire Chief Steve Sims said he's been with the department since 1994, roughly half the years it has existed, and he's seen a huge change in that time alone.

"We've grown a lot over the years," he said.

The department was established in 1969 by the POA Board of Directors in response to the growth in Bella Vista Village.

The board also appointed the first volunteer chief, Donald Grisham, an engineer who worked for Cooper, and approved plans for a fire department building on which construction began in November 1969 and was completed in May 1970.

Before the building opened, there was plenty of work to do.

Chief Grisham was still looking for volunteers -- including retirees to staff informational and administrative roles -- as the concrete and stone building was under construction. While in Oklahoma City, the Bill Story Fire and Safety Company worked to assemble a Boardman fire engine, capable of pumping 1,000 gallons per minute, according to a story published in the November 1969 Village Vista.

According to a June 1970 Village Vista article, during the May 19, 1970, dedication of the freshly-assembled fire department, which is currently Fire Station 1, Cooper's then vice president of marketing, Joe Basore, told the crowd that the new department would improve fire protection for the community and improve fire insurance rates for homeowners -- both concerns that are echoed today as the city moves to improve its fire service.

In 1972, the POA appointed the department's first paid fire chief, William Beck. According to a document on the department's history prepared by the city of Bella Vista, Beck was from Texas, where he had previously served as fire chief at Sheppard Air Force Base near Wichita Falls.

The nonprofit service was funded by the community and purchased its first ambulance in 1977, allowing service to start on Oct. 1.

A year after the ambulance service was established, the second fire station was opened in 1977 near the intersection of Trafalgar Road and Arkansas Highway 340, according to the city's document. That building is now the POA's Lake Ecology and Fisheries Lab, Sims explained.

The next fire chief, David Spring, was appointed in 1979, after five years with the department and 16 years of services with the Amarillo Fire Department in Texas.

At this point, the department had two stations, two fire trucks, eight paid firefighters and 17 volunteers.

Chuck Maclean, who still volunteers with the department and other parts of the city, was among those volunteers. Maclean said he worked with a friend at Concordia who got him involved.

At the time, U.S. Highway 71 was a two-lane road and followed a slightly different route, and very little of the development that's in place today was around.

"Jimmy's gas station was about the only thing out there," he said, referring to the fuel station that sat across from Fire Station 1 until it closed in 2009 and was later demolished in 2018.

Despite going into his 40th year, Maclean said he loves pitching in and helping the department operate.

"(I) enjoy helping out more than anything," he said.

Fire station 3 on Glasgow Road was put together in 1985 to provide fire service to the Highlands and opened in 1986. Additional firefighters were also hired to staff it, bringing the total to 23 paid firefighters, according to the city's document.

Around that time, Bryan Wolfgang -- who now serves as deputy chief -- joined the department.

Runs have increased a lot since then, he said, though at the time the village had a population of around 6,000.

In 1992, Henry Thompson was hired as the department's third paid fire chief. Thompson had been with the department since 1980 and served as a U.S. Air Force firefighter for seven years.

In Aug. 1994, Station 2 was closed and its firefighters moved, though some equipment was kept at the now-vacant station for use as needed.

Sims said he started in 1995 with years of fire service experience.

At the time, a given shift had a captain, a lieutenant, one or two firefighters and a single paramedic on duty, with another one or two at Branchwood, he said.

The department also had a several volunteer EMS and fire personnel it could tap, he said.

"Call volume wasn't as much as it is now," he said, noting a typical day saw around three to six runs.

The Station 2 nameplate returned in 2004 when construction started on a new fire station near the intersection of Trafalgar Road and Commonwealth Road. Construction wrapped up and the station opened in 2005.

In August 2007, Sims took the helm following Thompson's retirement and, in 2008, shortly after incorporation, the city took over the department.

It was a rough transition, he said. He had to prepare two separate budgets for the department, one for the city and one for the POA, in case the transition fell through.

And once the department was firmly in the city, he started looking at its needs closely -- specifically, he said, it needed a new station and additional personnel.

In 2012, the Bella Vista Ambulance Service dissolved and fell under the fire department.

Two years later, in 2014, the city council approved funding for Fire Station 4, built alongside Forest Hills Blvd., near the Highlands Gate, along with 12 new positions to staff the station which was opened July 9, 2016.

Sims continues to lead the department and said he's quite pleased with his career choice.

"I knew I wanted to do this back when I was a young man," he said, explaining that his grandfather served as fire chief in Albany, Ill., and he was in a house fire when he was four years old. "I've loved every minute of it. It's a good job."

Wolfgang agreed that it's an excellent job, but it isn't without its tough times.

"You see people at their worst, you see the devastation," he said.

Everyone has his own process for dealing with it, he said, and it affects everyone differently.

Wolfgang said one thing he can absolutely appreciate is the community. Bella Vista has consistently looked out for its fire department, he said, whether it's under the POA or the city, and that's allowed the department to grow and continue to provide the service Bella Vista needs.

"We're grateful for the community backing us," he said.