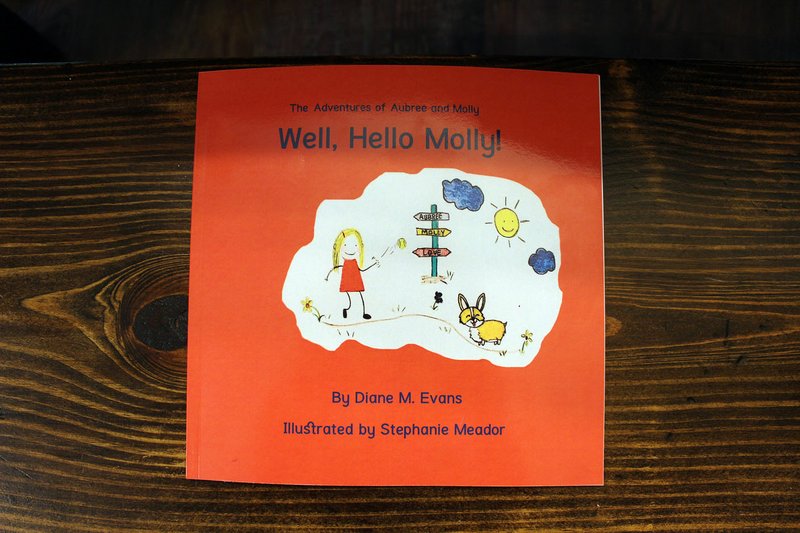 MEGAN DAVIS/MCDONALD COUNTY PRESS "Well, Hello Molly!" is authored by Diane Evans and illustrated by Stephanie Meador. The book is available online at Amazon.com. $1 from each book sale is donated to a local pet adoption agency.

Diane Evans has always had a heart for animals and literature. Her rural residence in Southwest City is home to four charismatic dogs and shelves filled with stories. Earlier this year, she teamed up with artist Stephanie Meador to put her passions together on the page.

"They're as cute as can be," Evans said.

Meador creates her art by hand, using a variety of media, including pens, pencils, crayons and markers, that allow for interesting visual texture in her drawings.

The pair always yearned to work together on a creative endeavor and, earlier this year, the two collaborated to publish a children's book with a purpose.

The first installment in the five-part series is titled "Well, Hello Molly!" and depicts a scenario many know first-hand. Aubree, the main character, desperately desires a pet and sets out to prove she is responsible enough for the job, eventually choosing her new, furry friend from an animal shelter.

"We wanted it to hold a positive message for children," Evans said. "We want kids to understand hard work, compassion, and the importance of adopting animals."

$1 from each book sale is donated to various local adoption agencies, including I'm Your Huckleberry Rescue and the Bella Vista Animal Shelter.

Muses for the story's lively characters, both two- and four-legged, were selected from Evans' and Meador's personal lives. The protagonist was based on Meador's granddaughter, Aubree, and Molly was inspired by Evans' pup of the same name.

Molly and her sister, Penelope, are no strangers to the dangers that often lead pets to animal rescues. Evans said she took the pair in after their previous owner threatened to shoot them. She describes Molly as "cute but ornery."

"She's the worst and best dog ever," Evans said, laughing. "She's tracked live moles into the house and at least three turtles. It's always something with her."

Evans said this mischievous personality is portrayed throughout the "Adventures of Aubree and Molly." The next installment, titled "Good Golly, Molly," features the antics of dogs and cats under the same roof and highlights the importance of getting along with others. The book is expected to publish at the end of the year.

It only took three months from inception to completion before "Well, Hello Molly!" was published, although the process did have its painstaking moments.

While in the early stages of proofing, Evans reached out to her niece who works in childcare to find out what draws children to books. She was told that the first books kids reach for on the shelf are those that rhyme.

"So, I rewrote the book to rhyme," she said. "It was challenging, but the story itself didn't change, just the sentence structure."

Transferring Meador's illustrations from paper to pixels also proved somewhat strenuous. When finished with an illustration, Meador would snap a photo of the drawing on her phone, then send the image to Evans, who would then upload the photo to a computer and prepare the image for publication.

Evans said the final product made hers and Meadors' labor of love worth it.

"To see my grandkids read the book, and be excited about it ... it was so cool," she said.

M. Green wrote, "Purchased for my great-niece and great-nephew. They are both the same age and they loved the story and shared it with their younger siblings. The illustrations were great and they are both excited for the books that follow."

Another Amazon customer wrote, "What a great book and quick read for kids. A beautiful story of teaching children to work hard and care for their pets. Sweet and inspirational for adoption of shelter pets."

Evans will be selling copies at the October First Friday event in Bentonville, Ark. She will also be showcasing "Well, Hello Molly!" at the McDonald County Library on Oct. 12 as part of the iWrite Celebration! event. The Library, the Historical Society and the Jane Preservation Society have teamed up to sponsor a youth writing contest and the winners will be announced that day as well.