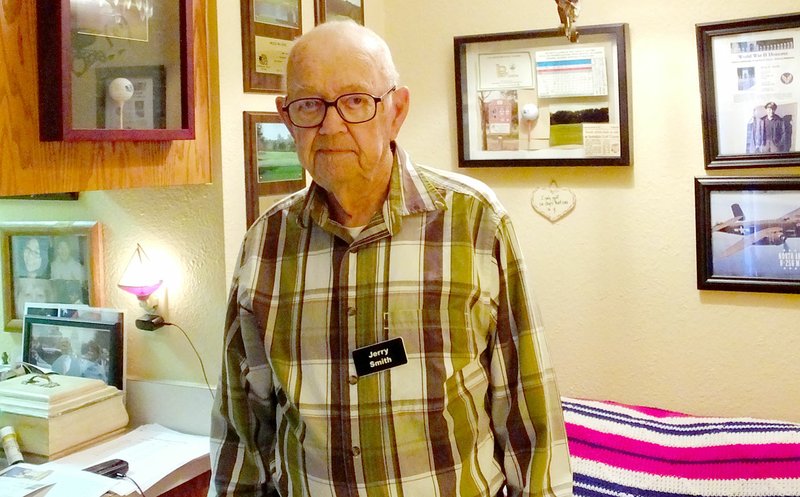 Lynn Atkins/The Weekly Vista Jerry Smith poses in front of six plagues in his Concordia Apartment commemorating holes in one. Smith was a pilot in World War II and evaded capture for months after his plane was shot down over Italy.

When he was 21 years old, Jerry Smith, along with his twin brother, left Muskogee, Okla., and enlisted in the Army Air Corps. It was 1942 and the draft seemed inevitable. The brothers decided they would rather fly in their weapon than carry it. After they signed up, they were sent back to college to wait but it didn't take long. Within a few months, the brothers were in boot camp.

After boot camp and testing, Jerry Smith started training to be a pilot, while his brother became a bombardier. Smith flew a B25, which flew lower than some of the other bombers.

"You needed to be straight and level over the target," he explained and that made the B25s a sitting duck for at least a short time on each run.

They operated off the island of Corsica, bombing bridges, rail yards and shipping yards in Italy. Italy had already surrendered and many of the Italian people were friendly to the allies, but Germany had sent an army south and Smith was part of an effort to keep that army tied up in northern Italy so it couldn't help against the allied forces further north.

On his 20th mission, Smith was part of a group that bombed a mountainside in order to trigger a landslide that would block a railroad line. The mission was successful, but the commander waited too long to pull the planes back. He was waiting to see if the landslide was effective, but that gave the anti-aircraft guns time and five planes were shot down.

Smith was the copilot of one plane, one of a crew of six that parachuted out, one at a time, into the dark, snow-covered countryside. Each man was on his own since the plane was still moving as they jumped out.

Smith landed on a road next to a ditch and jumped into it immediately. He buried his parachute and waited. During the long afternoon he spent in the ditch, he watched a group of black-clad German soldiers go by on bicycles. When night fell, he headed north.

Smith knew there was fighting in the mountains between some Italian guerrillas and the Germans. He had a compass, so he started out north across the fields. But it hard to travel overland in the snow and, eventually, he found another road and used it. At one point, a German soldier spotted him, but Smith managed to hide behind a woodpile. When the German soldier approached, he was met by a dog that chased him off.

"The Lord called that dog to attack that soldier," Smith explains.

He spent the next day in a lean-to that was in the middle of a field. The farmers used the lean-to's for a mid-day rest during the summer months. He spent the day and set off again when it got dark.

Eventually, he stumbled on a village and another dog barked as he approached. He had found a small mill at the edge of the village and the miller brought him inside and fed him. But they couldn't communicate. Later some of the partisans -- Italians engaged in guerrilla warfare against the Germans -- arrived. One of the partisans spoke French and had a French English dictionary. Smith only spoke English, but he pointed to the word in the dictionary, and the French-speaking Italian was able to translate.

Smith learned that his presence was putting the miller in danger. They were too close to headquarters, the partisan said, and he would need to move. Smith spent one day with the miller and his family and then partisans moved him to another village.

After two weeks with that family, a priest appeared to warn them that a search was underway. Smith was taken to another village where a carpenter named Peppi, his wife Rosa, and their son Romano took him in. Smith stayed there from February until the war in Europe ended in May.

There wasn't a lot to do while he was hiding. He couldn't go outside except for the family's courtyard. Occasionally, they would get word that the village was about to be searched and Smith would leave the house to hide in the fields.

One night, a plane crashed near the village and the villagers went out to salvage what they could find. They found the logbook and brought it to Smith. Later, when he was back with his unit, he turned in the logbook but first, he asked permission to copy the names and addresses of the crew that died in the crash.

After the war ended and Smith was back in college, he wrote to the families of that crew to let them know what happened. It took 40 years before he got a response. He was living in Tulsa when he got a phone call from the brother of the pilot who died in the crash. He had found Smith's letter while cleaning out his parents' house and called to thank him. The brother was planning a trip to Italy and, thanks to Smith's letter, he knew where to go to visit the spot where his own brother had died.

Smith married his high school sweetheart and they had five children. He kept in touch with the Italian family that sheltered him for a while, but it was hard since there was still a language barrier. They wrote to him in Italian and he had to find a translator before he could read it. But his children all knew the story of their father's service and, recently, his daughter traveled to Italy.

She found Romano's wife still living in the home that had sheltered her father. Peppi, Rosa and Romano had all died, but the wife knew the story and was excited to meet the daughter of the family's pilot. Smith emailed her photos of the rest of the family.

After a career working for an oil pipeline company, Smith and his wife retired to Bella Vista to play golf. That was 30 years ago. Smith lost his wife about five years ago, but he still plays golf at least twice a week and he's proud of six hole-in-one plaques.

"I lived through it and I give the Lord credit for that," Smith concluded.