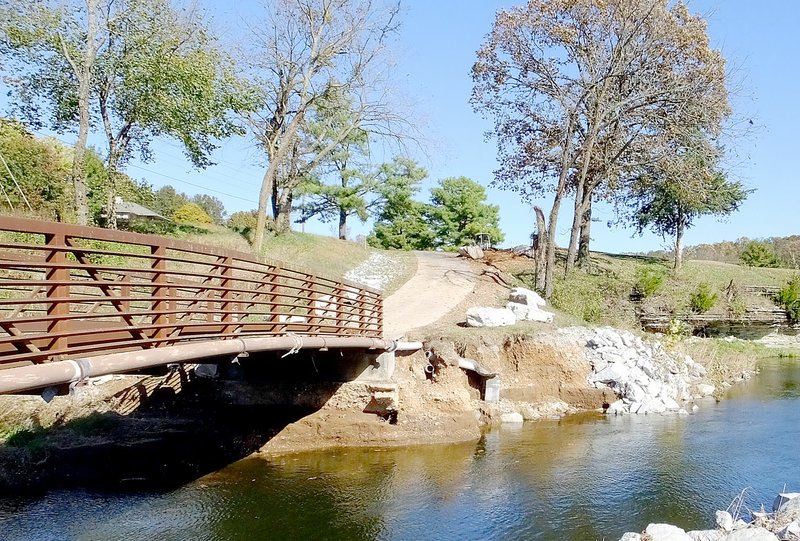 Lynn Atkins/The Weekly Vista The bridge at Scotdale hole 2 seems to be undamaged, but the creek lost a large portion of the bank during the flooding which may have undermined the approach to the bridge. If the engineers say the bridges are safe, the font nine holes of Scotsdale may reopen.

Two flooding events that happened in October are still keeping nine holes of Scotsdale closed, but maintenance director Keith Ihms believes it may be reopened this week.

The problem is the approach to two bridges on the course. The flooding that happened on Oct. 6 changed the creek that the bridges cross. The bridges themselves weren't harmed, but Ihms is waiting to find out if the approaches are safe after erosion took away a chunk of each bank. Damage to the irrigation system near the bridge at hole 2 was already repaired by POA employees.

"It was the most water anyone remembers coming out of Loch Lomond," Ihms said. There was so much water, moving so quickly, it demolished the dog park across from the golf course.

Ihms is waiting for a Crafton Tull engineer who is familiar with Bella Vista golf courses to assess the bridges. If he believes they are safe, the front nine of Scotsdale can open before repairs are made.

The engineer will also develop a plan to stabilize the creek beds and research what permits are needed to work in the creek. In 2016, the area was stabilized with rip rap. Although the rocks used were large, they were still washed away.

Once the engineer has turned in his recommendations, the board can consider the next step, and that may be to put projects out to bid.

Meanwhile, the entire course was closed last week due to temperatures. On Monday, Oct. 28, the forecast was calling for temperatures to drop to below 28 degrees at night. Since the greens on Scotsdale are Bermuda grass, they can be damaged by very cold weather.

When the greens were converted to Bermuda, the POA purchased covers that can protect them from cold temperatures, but putting the covers on is a big job, Ihms said. All of the Scotsdale maintenance workers are involved, but they still need help from other courses or from the pro shop and it takes all day. Also, if there is wind, handling the large covers can become dangerous. The course superintendent has to plan carefully to make sure the covers are in place when necessary.

On Monday, Nov. 4, the back nine at Scotsdale reopened.

The covers can't be left on all winter, Ihms said, because the grass underneath still needs water and air. But they can remain in place for a few days at a time. This year, the covers came out on Oct. 29, which was about a month earlier than usual.