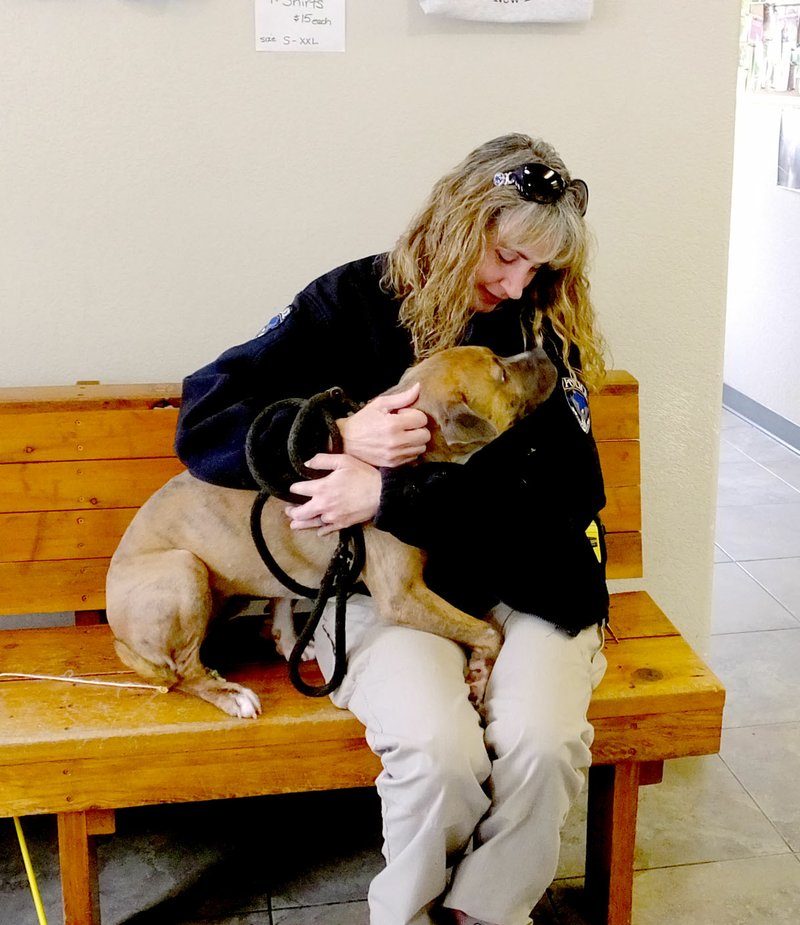 Growing up, she was the kid who brought home every stray animal she found, so it's only fitting that Leslie Pratt became Bella Vista's animal control officer.

She was working in dispatch for the police department when the job came open and she knew it would be a good fit. She's spent some time with the former animal control officer and took some classes both online and in person. She's been working in the position since January.

Recently, she was able to help capture a semi-feral dog who is now eligible for adoption at the shelter.

"It's just persistence," she said about catching difficult dogs. She started going out to places where the dog had been seen with food for it. She wanted the dog to get to know her. With the help of Laurie May, the animal shelter manager, and a neighbor, she brought the dog in.

"He's got a few quirks," May said about the dog, a hound mix now named Jerry. "He'll find a home, but it has to be the right one."

If Pratt picks up a dog, she can scan it for a microchip on the spot. If she can determine the dog's owner from the microchip or tags, she'll take it home. If she can't find the owner, the dog goes to the shelter.

Anyone who finds a dog should bring it to the shelter, May said. Sometimes people will try to find the owner on their own and keep the dog while they look. Meanwhile, the actual owner gives up the search and, by the time the shelter receives the dog, the owner has stopped looking.

Microchips are only as good as the information provided, Pratt warned. If a person rehomes a dog or moves to a different address, they need to contact the microchip company and update the information.

She's also helped a few cats, including one she managed to find after a fire destroyed a home in Bella Vista The cat was scared but not hurt. Cats should be microchipped too, she said.

When people contact her about missing animals, she tells them to get on Facebook. She has a list of Facebook sites that she checks every day to see if someone has lost or found a pet.

"The people on those sites are amazing," she said. They'll go out and look if they hear about a neighbor's pet. One of the best ones is "Bella Vista Fur Babies and Friends."

If people have complaints about their neighbor's dogs, she answers the call. It's not always the most fun part of the job, but people in Bella Vista have been easy to work with. They almost always agree to keep their dogs inside and quiet.

Occasionally, she gets calls about wildlife and, while she would like to help, it's usually not something she can do. She has helped home owners move snakes, but sick foxes or wayward coyotes may require a referral to Arkansas Game and Fish or even a private trapper.

Pratt is doing something she loves to do in the city that she loves. She can't imagine doing it anywhere else.