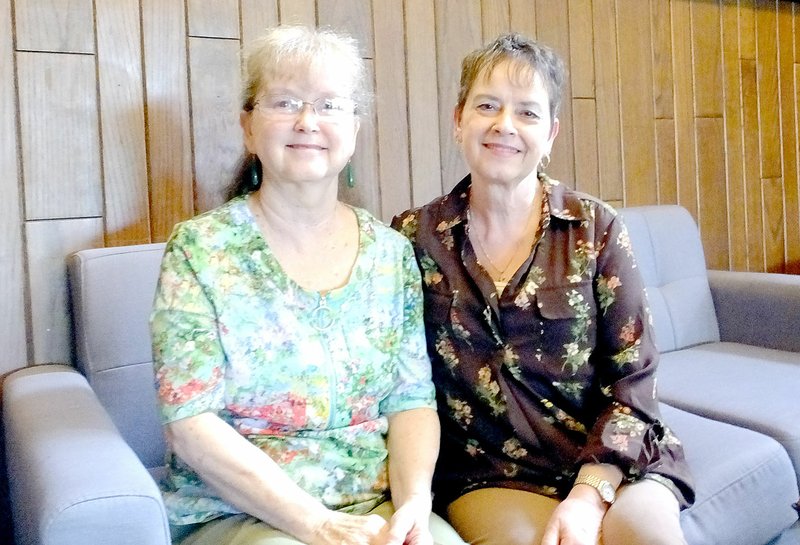 Lynn Atkins/The Weekly Vista Sisters Judy Daniel and Debbie Emberton are making plans to welcome a brand new sister to the family this week. They are meeting a half-sister for the first time, thanks to DNA testing.

By the time people reach retirement age, they usually know all their siblings, but that's not true for two Bella Vista women.

Sisters Judy Daniel and Debbie Emberton recently got some news, thanks to Ancestry.com.

Judy first heard about it through an email from her daughter who was doing some genealogy. When her daughter put in her mother's information, someone contacted her looking for a family connection. That was in March.

Judy agreed to talk to the woman, Linda King, and her daughter put them in touch. It turned out they had a lot in common. Both were born in Cincinnati, Ohio, and were only a few months apart in age. Linda told Judy that she had always known she had siblings, but her mother would never tell her anything about her father. It took years for Linda to find an aunt who remembered the man her mother had been seeing all those years earlier, but the only name Linda got was Black. Judy's maiden name was Emberton, but there's more to the story.

Judy knew her father's nickname was Blackie and she knew why. His last name was actually Black. But when his mother remarried, he chose to use his stepfather's last name, Emberton. He probably didn't change it legally, Judy said, but he used it for most of his life, even when he enlisted in the army. There would be few records of him under his actual name.

She also knew that her parents had had a difficult relationship and separated more than once. When she was about six years old, she was introduced to two half-siblings who were the product of an earlier marriage. So for Judy and her sister Debbie, discovering another half-sibling wasn't as shocking as it might have been.

Linda had already completed a DNA test that linked her to Judy's daughter, so Judy and Debbie agreed to do one as well. The DNA showed they were probably sisters. But the real proof, Judy said, was when they talked to Linda on Facetime and realized how much she looks like their father and like their other half-siblings who had both died.

"I wasn't sure what to think," Debbie Emberton said. "I've never known anyone that something like this happened to."

The family left Cincinnati when Debbie was very young, but Judy remembers living there. It turned out that she and Linda had attended the same school and frequented the same skating rink. She doesn't remember ever meeting her, but they may have crossed paths as children.

Judy and Debbie's parents are both deceased, but Judy thinks her mother would have accepted Linda just as she accepted the other two half-siblings. She can't know for sure, but she believes her parents were separated when Linda was conceived.

Looking back, Judy believes she understands now why her father seemed overprotective when she was a teenager. He was probably afraid she would meet someone just like him.

Linda is coming to Bella Vista this month to meet her new sisters face-to-face. Judy is planning on showing her the sights, including Crystal Bridges and Cooper Chapel. Then they'll drive to Cincinnati together and visit Linda's son.

Linda, Judy reported, is ecstatic to finally have a family, thanks to a DNA test and Ancestry.com.