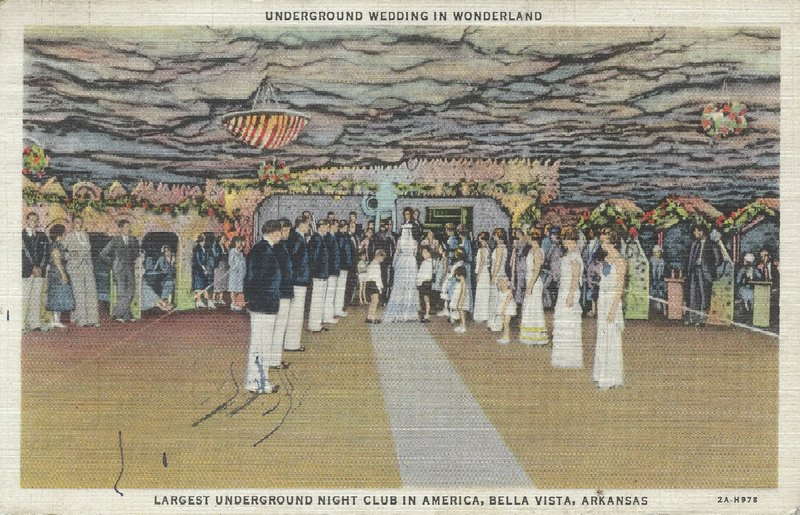 1933 postcard of a wedding inside the famous Wonderland Cave of Bella Vista. Many wonder, as it is unknown, if it could be a capture of the August 11, 1932, Mystery Wedding that married Mrs. Tillie Green and Mr. Bennett A. Shiley of Iowa.

Editors Note: With summertime being the most popular time for weddings, we look back at this wedding that took place 87 years ago in Wonderland Cave on Thursday, August 11, 1932, as described in an old issue of the Linebarger newspaper, Bella Vista News, dated August 16, 1932. Accompanying this article is a scan of a 1933 postcard also of a wedding in the Cave, but it is not known if it was the same wedding.

A beautiful wedding ceremony was solemnized Thursday evening at 10:30 o'clock at Wonderland, Bella Vista's marvelous underground night club, when Mrs. Tillie Green and Mr. Bennett A. Shiley, both of Iowa, were married in a nuptial setting that was strikingly unique, yet charming in its every harmonious detail.

It was a colorful picture there beneath the cathedral-like dome of the age-old cavern, and one long to be remembered, when, as the strains of the Bridal Chorus from Lohengrin died away into faint echoes down the mystic corridors and through the vast chambers of Wonderland, the bride and groom, surrounded by their bridal party and flanked by hundreds of guests, took the solemn vows of matrimony as the marriage services were read by Judge David Compton.

"I Love You Truly" was beautifully sung by Miss Rose Keller just before the entrance of the bridal party.

After the bridesmaids and ushers had grouped themselves near the altar came little Sonny Warren, the ring-bearer, followed by the groom, attended by C.A. Linebarger as best man. They were followed by Mrs. G.E. Eldridge, the matron of honor, beautifully gowned in a charming pink creation.

Then came the three dainty little flower girls, Elaine and Natalie Whitaker and Constance May, strewing blossoms in the path of the bride, who was unknown to the assembled guests until she appeared on the arm of Mr. George Roberts. She was beautiful in a wedding dress of chiffon over white satin. She carried a bride's shower bouquet and her veil was caught up with orange blossoms.

The small train bearers were Fred Whitaker Jr. and W. T. May Jr.

Replete as this marriage was with the elements of mystery and breathtaking surprise as the wedding march boomed out and hundreds of necks were craned as their owners rose on tip-toe to catch a first glimpse of the faces of the happy couple -- and when the identity of the bride and groom was finally grasped by the assembled audience, a really big surprise was yet in store for the bride, for as she turned away from the altar as Mrs. Bennett A. Shiley, she was confronted by her father and mother, Mr. and Mrs. Ben Wilkerson, and her brother and sister-in-law, Mr. and Mrs. Ben Wilkerson Jr., all of Dows, Iowa, and who, until that moment, she had not the slightest idea were within several hundred miles of Bella Vista.

As a surprise to their daughter and sister, they had motored here for the wedding, and arriving Thursday afternoon had kept themselves out of sight of the bride until furnishing a dramatic and most pleasant climax to that happy occasion.

To the excellent taste and unusual talents of Esther Taulbee-Roberts, of the Akadar Ballroom of Tulsa and the Bella Vista School of Dance, and her wide experience in arranging and directing important social events as well as spectacular ballroom and stage revues is due the beauty and completeness of details of Wonderland's unique Mystery Wedding.

And at last one must credit womankind with the ability to keep a secret, for although Bella Vista circles have talked for weeks about this approaching nuptial affair, the identity of bride and groom actually was kept a secret until their entrance to the strains of the wedding march, played by Freddie Power and his All-Artist Orchestra....

In arranging and directing the Wonderland Mystery Wedding, Mrs. Roberts was aided greatly, as always, by Mr. Roberts, who also has had many years' experience in this profession. Both have been popular with Bella Vista people for many years and are Bella Vista cottagers and cottage owners.

The principals of the Mystery Wedding, who have been at Bella Vista throughout the season and whose romance, culminating in their marriage in Wonderland Cave, began with their meeting here at "Nature's Gem of the Ozarks," still will be resort residents until the 1932 season closes, and plan now to return here again in 1933.