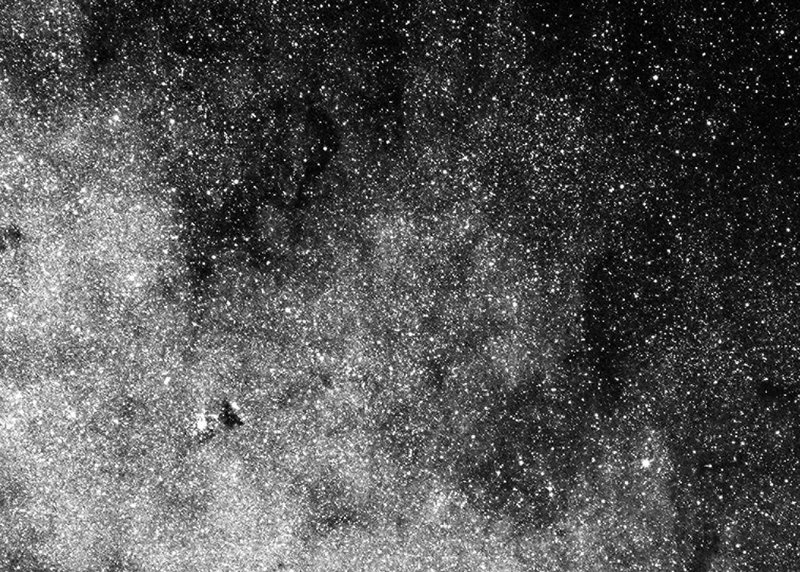 David Cater/Star-Gazing Pictured is a stretch of the Milky Way -- count the stars!

I always think of August as Milky Way Month. August and September present the Milky Way about the best it can be seen at a decent hour.

The Milky Way, our home galaxy, does require one thing to see it well -- a dark site from which to observe it. In so many cities in well-developed countries such as the U.S.A., people can wonder what one is talking about when the Milky Way is discussed because they can't see it and may never have seen it. The big cities simply present too much bright city illumination to see something that is actually faint.

So, if you want to see the Milky Way, get outside on a dark country night and appreciate the glory. Around 10 p.m. to 11 p.m. will be a good time to see it. It should cut the night sky nearly across from north to south, getting brighter and denser as you move your eye south. Looking straight south, you will see the densest part of the Milky Way. A line drawn from you directly to the densest part would point to the center of our galaxy, about 23,000 light years distant.

What are you seeing when you look at the Milky Way? It actually was not that easy to determine -- it took the 19th and 20th centuries to be sure of what we are seeing.

We had to realize that we were not in the center of our galaxy, but that we were on the inside of one of the spiral arms of our galaxy. Careful study and careful star counting revealed that we must be looking at the back side of the next arm inward, towards the center of our galaxy. The Milky Way is basically lens-shaped and we are neither near the edge of the lens, nor near its center. We also had to realize that whichever hemisphere from which we are observing only reveals the northern or southern half of the Milky Way. To see the whole thing, one would need to travel to both the northern hemisphere and the southern hemisphere to see all of it. Then, one would have to put the two halves together on one's mind to imagine how the whole Milky Way would look. Fortunately, photographs have been constructed as a mosaic that nicely puts our galaxy together as one single view of the lens shape.

Binoculars really help when one wants to scan the Milky Way on a dark night. I like to lie on my back with some sort of pad under me and scan up and down the length. I pause at an interesting part, dream about being there, then move on. It is never the same experience twice. I always notice something each time I look in these mysterious clouds that I hadn't seen before. October is about the last time in the northern hemisphere that one can see the Milky Way well, so do it now if your interest is piqued. I have included a small stretch of our galaxy I photographed in black and white -- see if you can count the stars. Well -- they are uncountable, even though this is merely just a bit of what can be seen in the night sky.

Jupiter and Saturn reign supreme directly south. Jupiter will be the brightest thing in the sky unless the Moon passes through in its monthly circuit. Saturn, dimmer than Jupiter, will be about one fist-width behind Jupiter -- it will have a bit of yellowish cast. Even small telescopes will show both of these planets as amazing!

The night of Aug. 12-13, after midnight, one might see many meteors during the Perseid Meteor Shower. Put your camera on wide open, fix it on a tripod, set the ISO at 1600. Set it on Bulb and use a 30-second exposure. Aim a little northeast in the sky. Try this repeatedly during the night and you might record some interesting meteor trails.

Clear August skies to all!