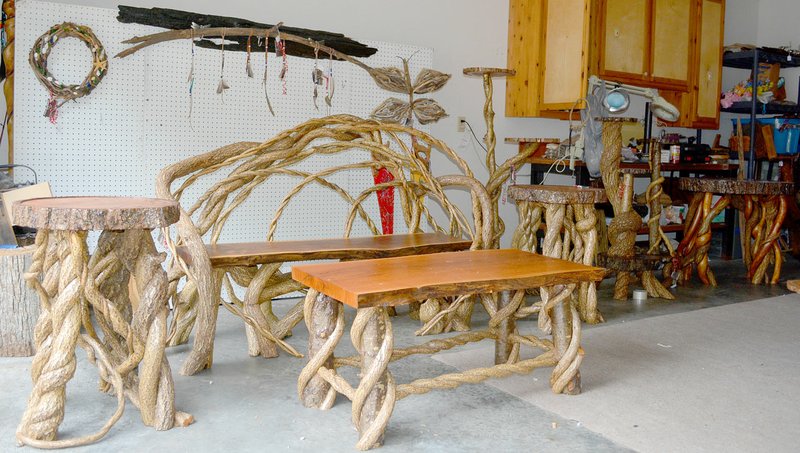 Keith Bryant/The Weekly Vista A bench and tables are among the vine-and-wood-crafted items put together by Mornin' Wood Studios, a collaborative effort between husband and wife team Thomas and Sandra Diliberti.

They hand build furniture and home decor using dried vines and driftwood, Sandra Diliberti explained, and they each have their own niche -- she handles the driftwood and he focuses on working with the vines. But they both lend a hand with each other's work, she added, noting that he's set up mounting hardware on her wall-hanging pieces and she's done tile and crushed shell mosaics on his tabletops.

"We do work together as a team," she said.

They've made benches, tables, chairs, plant stands and a variety of purely ornamental pieces, including driftwood anchors, crosses, seahorses, herons and others.

Diliberti said they have done shows and events, including craft fairs and the Bella Vista Farmers Market, but she would love to see the business do well enough to open a storefront.

Before moving to Bella Vista, she said, the couple ran an antique shop in Long Island, N.Y.

This is sort of an extension of that, she said, but with a focus on nature. They take driftwood that can clog waterways and oriental bittersweet -- an aggressive, invasive and destructive vine -- to make their art and furniture.

The majority of wood and vines are collected locally, though some gets picked up on trips out of state, she said.

Picking the pieces isn't an exact science, she said. They know what kind of pieces they can use, but describing it is nigh impossible, she said.

"It's just got to be something that catches the eye," Diliberti explained. "I have tons of driftwood and it's never enough."

Once the wood is collected, it has to dry out and it needs space to air out, meaning it can't just be piled up, she said. Some pieces can take more than a year to fully dry, she said.

Taking a pile of seasoned wood and vines and making a cohesive, usable shape out of it is like working a puzzle, she said.

And a custom order can be even tenser, she added. It can be tough trying to put together exactly what someone wants with nature's scrap pieces, she said.

"We like to make everybody happy," she said. "Usually we nail it, but it's a challenge."

One customer, Long Island, N.Y., resident Edie Sanchez, said she's friends with the couple and owns a handful of their pieces.

She said she appreciates how unique each piece is and she feels like there's a lot of love and energy in each piece.

"I love their vision," she said.