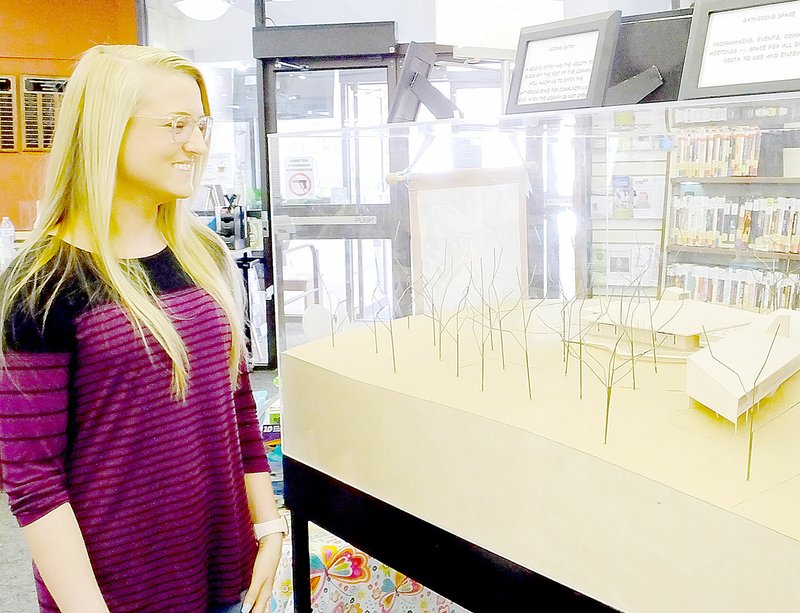 Lynn Atkins/The Weekly Vista Amanda Gibson, adult services librarian, looks at the model of the future library expansion. The model has been in the library since fundraising for an additon to the building began in 2013.

Work will begin soon on an addition to the Bella Vista Library, Susan Santos, chairwoman of the Bella Vista Public Library Foundation board said. A groundbreaking ceremony will be held within about three weeks, she said, but the final date has not been set.

"This expansion will add space for a larger children's area, a quiet reading room, two study rooms, a small meeting and conference room, new ADA compliant bathrooms, and a large community gathering space with a small kitchen area nearby," she said. "There will be a second entry near the community gathering space allowing it to be used even when the main library is closed for business."

The plan for the additional space was developed in 2012 and fundraising began in 2013. In 2014, the city took over operations the library, but the building remained the property of the Library Foundation, a nonprofit group.

"By state law, the city cannot pay to expand the library; only the Foundation can expand it," Santos explained. "The city can, however, furnish the addition, and it has committed funds to do so."

As it became apparent that the project was not going to be funded by private grants, the Foundation Board looked for ways to save costs. The plans were scaled back slightly and a decision was made to defer construction of a new parking lot in spite of the need.

"The Foundation still needs to raise about another $150,000 to complete paying for this expansion," Santos said, adding that the people of Bella Vista raised about 90% of needed funds so far.

"I am constantly amazed and humbled by the incredible support the people of Bella Vista give to their library. This is truly a community library."