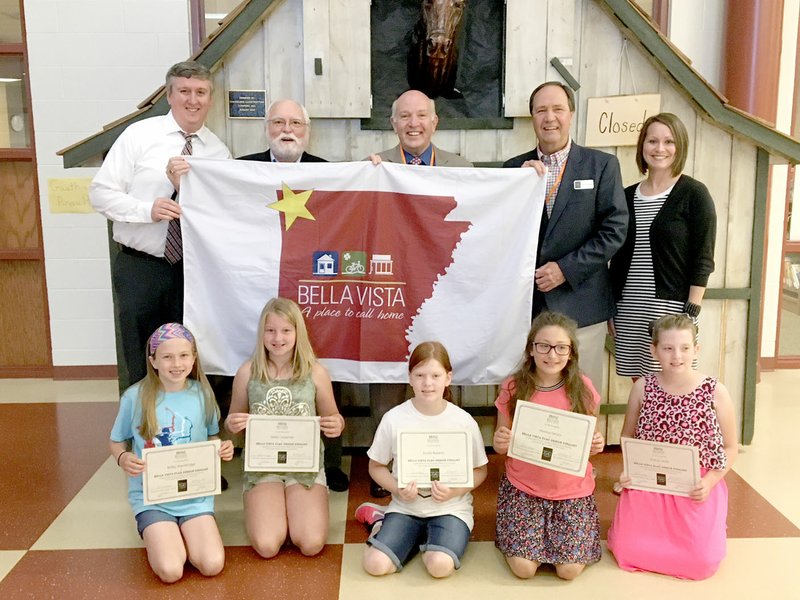 When the city's Arts Council asked Cooper Elementary for some help creating a new city flag, fourth-grade teacher Shannon Tweedy found a way to get the entire school involved. One class of fourth graders, researched and wrote a PowerPoint presentation about flags and about Bella Vista. All the students at Cooper listened to the presentation and then had a chance to draw their own flags during art class.

The flag had to incorporate the city's logo, according to instructions form the Arts Council. The artists added other symbols.

The teachers and the Arts Council narrowed down the choices to five flags which all happened to be designed by fourth-grade girls. Then the city council chose the winner.

Madeline DeCorlo used a diamond in the center of her flag. She wanted it to look close to an Arkansas state flag.

Shanina Levitt used stripes too, but hers included blue for the lakes, green for nature and yellow for the sun.

Stella Carpenter used yellow and white on her flag, but she made the state of Arkansas red because that's the Razorback color.

The winning design by Briley Wooldridge also used a representation of the state in red with a yellow star in the northwest corner for Bella Vista and a white background because white means peace, she explained.

For some of the students, it wasn't the first time they designed a flag. Stella said she designed a flag in third grade when she was also creating a country for a school project.

Madeline did a similar project when she was in school in Dallas.

Shanina made a hogs flag in art last year.

They agreed it was a fun project and are looking forward to seeing Briley's design, not only on the city's flagpole but also on promotional items for the city.

Briley received a POA pool pass for one year for creating the new city flag.